Greenhouse gas emissions (GHG) have been a topic of hot debate in Canada as of late, especially when it comes to new pipelines and carbon taxes.

To shed some light on energy use and GHG emissions in Canada, we delved into recent articles released on The Daily at Statistics Canada and found some interesting data for 2016.

Reduced GHG emissions were made across all industries except for one, while all but two managed to reduce their total national energy consumption.

Here’s some of the key points taken from the report Energy use and greenhouse gas emissions by industries and households, released September 7th, 2018:

Canada’s as a Whole: Quick Facts

The total amount of energy being used by Canadian households and industries combined dropped by 0.3% in 2015 and by 1.3% in 2016

Direct industrial energy use was 5.19 terajoules per million dollars of gross domestic product (GDP) in 2016, down 2.3% compared to the previous year

Direct industrial GHG emissions released was 0.36 kilotonnes per million dollars of GDP in 2016, down 2.9% year-over-year

Canada’s residential sector was the largest energy user, consuming 24.0% of the total energy consumption in Canada in 2016 – down by 0.2 percent year-over-year

That’s approximately 75.8 gigajoules of household energy used per person – or about the amount of energy contained by 12 barrels of crude oil (504 gallons, 1908 litres)

Despite using almost a quarter of the energy, households were responsible for emitting 19.1% of total national GHG emissions largely in part due to energy use coming from electricity which does not directly contribute to producing more GHG’s. 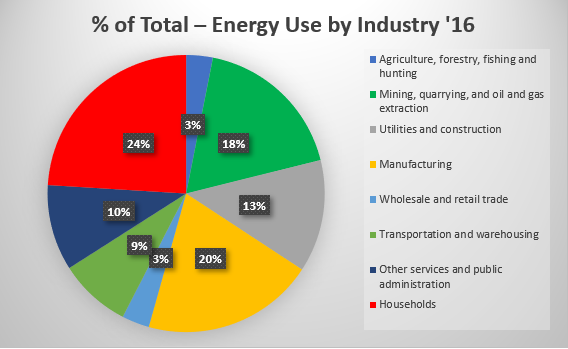 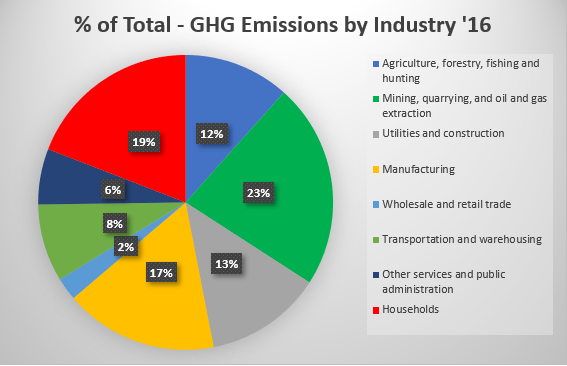 Energy used by the utilities and construction industries dropped by 1.9% in 2016 on a year-over-year basis after a 6.5% increase in 2015

Utilities and construction accounted for 13.1% of Canada’s total energy use in 2016, a drop of 0.1 percent over the year before

Energy used by the mining, quarrying and petroleum extraction sectors accounted for 22.5% of Canada’s total consumption in 2016.

These sectors decreased their overall GHG emissions by 1.4% in 2016 on a year-over-year basis

Energy used by the agriculture, forestry, fishing and hunting industries accounted for 3.1% of the total national consumption in 2016

Total GHG emissions increased by 1.5% in 2016 for these industries to 11.6%, a modest gain considering that more emissions are expected from the industry

Energy used by the manufacturing industry accounted for 20.1% of the total national consumption in 2016, down 2.0% from the previous year.

This accounted for 16.8% of the total national GHG emissions, a decrease of 1.3% from the previous year

Energy used by the transportation and warehousing industries accounted for 8.4% of Canada’s total consumption in 2016, down by 5.0% year-over-year

These industries were responsible for releasing 8.5% of the national total GHG emissions, down by 5.5% from the previous year

Energy used by the wholesale and retail trade industries accounted for 3.2% of the total national consumption in 2016

These released a mere 2.5% of the total national GHG emissions in 2016, down 2.2% when compared to the previous year

These were responsible for releasing 6.1% of the total national GHG emissions, down by 1.6% year-over-year

Canada is a World Leader…

Did you know that Canada is a worldwide leader in the production and use of energy from renewable resources on a per capita basis? There’s a lot that people don’t know about Canada, GHG and renewable energy.

Truth is that Canada is responsible for just 1.5% of the world’s GHG emissions, and the oil sands, just 0.16%. Also, of the world’s top 10 oil reserve countries, Canada is without a doubt the most transparent, monitored, socially responsible, democratic and environmentally balanced.

As the pipeline debate continues, it’s important that people understand the facts and that both sides of the discussion are heard!