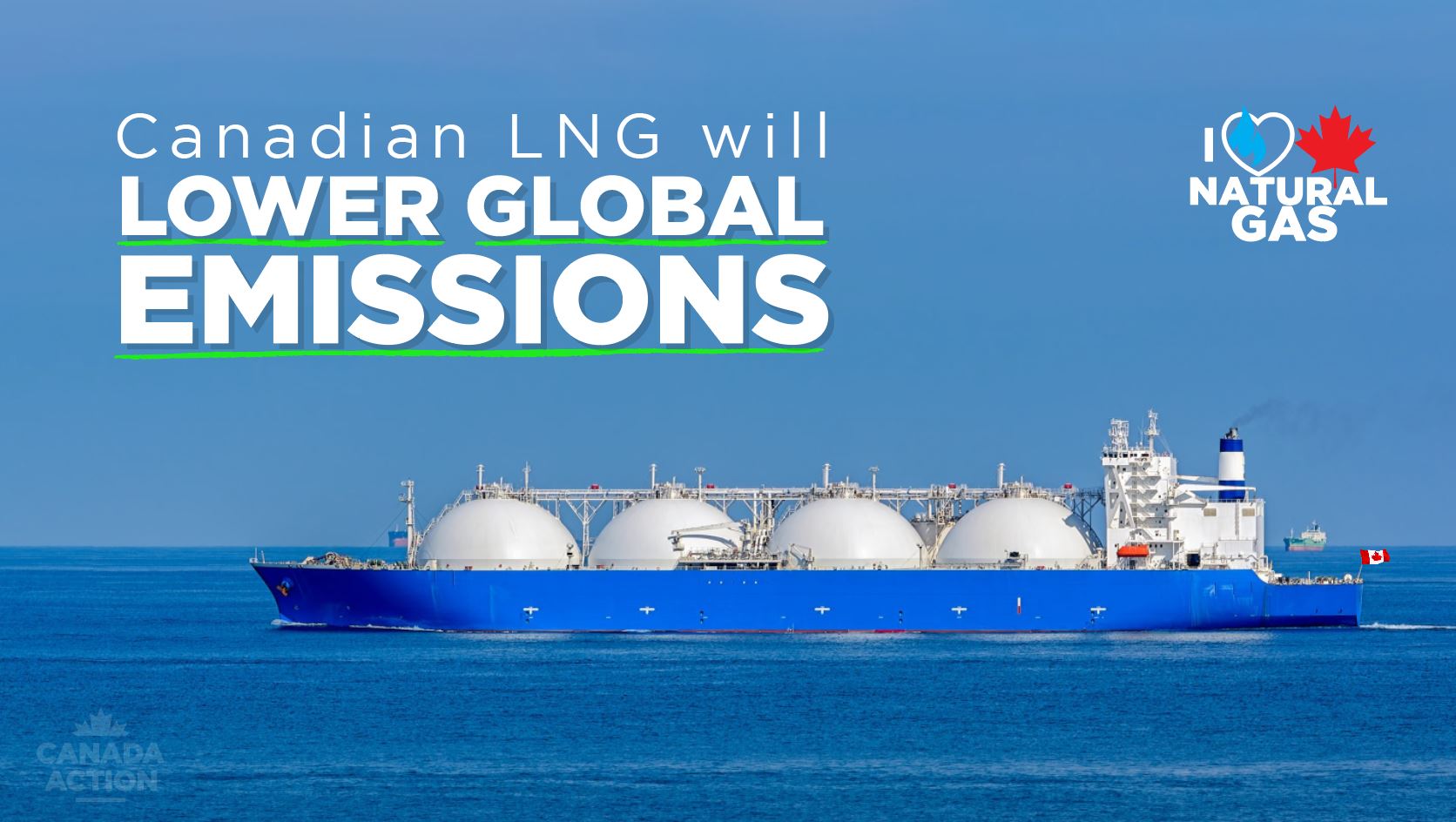 Will LNG projects on Canada's West Coast increase global greenhouse gas (GHG) emissions? It's a good question, and one that should be brought into into the limelight as a result of continued resistance from opponents who claim these projects will do the opposite.

The notion that Canada’s world-class LNG export facilities will hamper global emission reduction efforts isn't supported by the facts. Such claims don’t help to nurture balanced discussions on Canada’s massive wealth of natural resources and the increasingly important role our country should be playing on the world stage as a stable, responsible and democratic supplier of oil and natural gas.

Here are the hard facts on Canada's West Coast LNG projects and the global emission reductions these facilities can accomplish. Also see:

Cedar LNG is an Indigenous-led pre-construction project in Kitimat, British Columbia. Supplied by the Coastal GasLink pipeline, the British Columbia Environmental Assessment Office (BCEAO) says the facility is likely to be one of the lowest emissions intensity producers of LNG globally due to its reliance on renewable electricity from the BC hydro grid.

“Cedar LNG could support global decarbonization and the transition to a more sustainable energy future through the displacement of higher emitting fuel sources (e.g. – coal), and via shorter shipping distances as compared to those associated with competitors to Asia-Pacific markets,” the BCEAO’s lengthy project report states on page 488.

The floating Cedar LNG export facility is projected to have an emissions intensity of just 0.08 per cent of carbon dioxide (CO2) per tonne of LNG produced, less than one-third the global industry average of 0.35 per cent per tonne [1].

Woodfibre LNG is a proposed export facility currently in the pre-construction phase of development. Located near Squamish, British Columbia, the project has received three environmental approvals from the provincial and federal governments as well as the Squamish Nation.

According to a consultancy report, Woodfibre LNG will bring about substantial emission reductions when used overseas to displace coal-fired power and heat generation:

“Using LNG from the Woodfibre facility to produce electricity would result in an estimated 45% GHG emissions reduction compared to an equivalent amount of coal-fired electricity generation. To put it in context, these avoided emissions would be equivalent to 1.5 million car trips (round trip) from Vancouver to Toronto, or 76 years’ worth of the annual emissions from Squamish itself.”

The facility is projected to have an emissions intensity of just 0.04 per cent of CO2 per tonne of LNG produced, less than one-sixth the global industry average of 0.35 [2].

“Considered the most expensive private investment in #Canadian history, the $40 billion #LNGCanada project has so far awarded $3.9 billion in contracts and procurement to B.C. businesses and of that total, >$3 billion will go to Indigenous businesses…” https://t.co/86yWwWHavF

LNG Canada is the only export facility of 18 proposed projects in Canada to undergo construction. As one of the largest energy investments in Canadian history, the $40 billion project is now more than 70 per cent complete and is expected to load its first LNG tanker in 2025.

Research shows that LNG Canada’s gas exports to China, when substituted for coal, will emit anywhere from 35 per cent to 55 per cent fewer GHG emissions.

The world’s second-largest economy is constructing new coal plants at full speed ahead, with 270 gigawatts of new coal-fired capacity planned in the coming years, which would vastly exceed the entire fleets of the world’s biggest coal-using countries [4]. Canadian LNG can play an instrumental role in prevent some of those emissions from entering the atmosphere.

LNG Canada is projected to operate with an emissions intensity of 0.15 per cent of CO2 per tonne produced, less than half the global industry average [3].

Ksi Lisims LNG is another Indigenous-led project in northwestern British Columbia. Located at Wil Milit in Nisga’a Nation territory, the proposed facility was recently given the ‘OK’ by the Canada Energy Regulator to export natural gas in the form of LNG.

Proponents of Ksi Lisims LNG have committed to operating with net zero emissions within three years of the project’s first shipment. Renewable electricity, strong monitoring and measurement practices, a focus on energy efficiency, the purchasing of carbon offsets and potential use of carbon sequestration and storage are part of Nisga’a Nation’s plan to reach net zero emissions.

LNG projects like Ksi Lisims are proving to be instrumental in helping promote economic reconciliation with Indigenous communities in Canada that are looking to generate own-source revenues through the responsible management of natural resource development on their lands.

This win-win proposition sure makes the most sense. #CdnPoli #CdnEcon pic.twitter.com/j9R1qAjM5j

Other now-defunct LNG projects on Canada’s west coast also were projected to have world-leading emission profiles. Pacific Northwest LNG was projected to operate with 0.27 per cent CO2 / tonne produced, while Kitimat LNG was expected to have an emissions profile of 0.10 per tonne.

Unfortunately, these mega-projects never made it to construction. They would have likely played a significant role in providing Asia’s developing market economies with reliable and responsible natural gas supply for decades and contributed to shoring up supplies for global markets in turmoil over the past few years.

But it’s not too late. 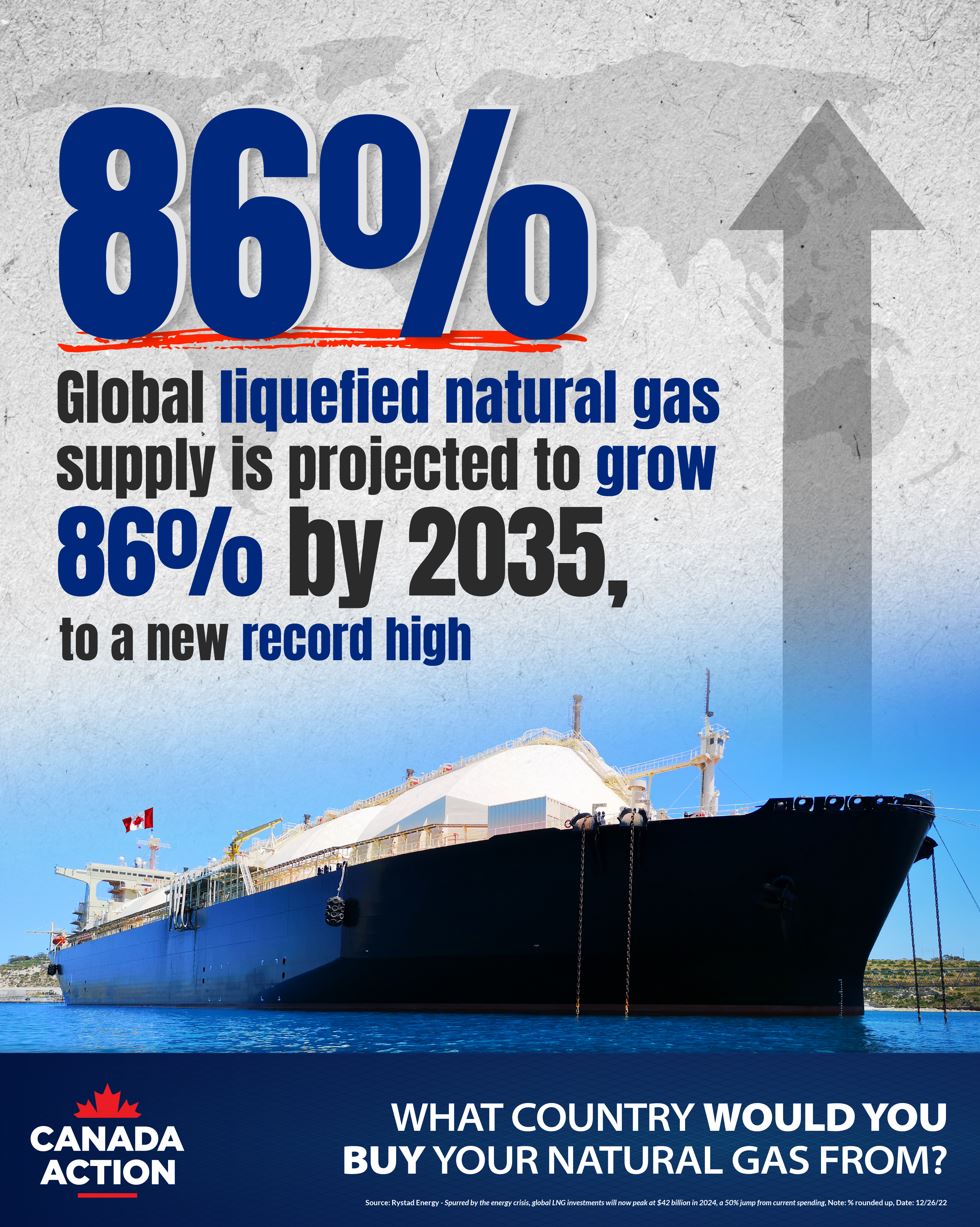 Global LNG demand is projected to grow 90 per cent by 2040. Asia is to account for nearly 70 per cent of that growth, according to Shell’s 2022 LNG Outlook.

The facts above make it abundantly clear that West Coast Canadian LNG facilities will in fact decrease global emissions, not increase them as opponents claim. The BCEAO’s decision to approve Cedar LNG, citing its global emission reduction potential, indicates that reality – which should also remind unpragmatic environmentalists who want to shut down world-class Canadian LNG projects that the global climate is just that, global.

If Canada can help reduce global emissions by developing its LNG industry, this also means our economy will have significantly more capital to invest in new cleantech and innovation focussed on improving environmental outcomes.

Shutting down Canadian LNG projects does nothing to keep a single molecule of natural gas in the ground. All this does is help shift global production elsewhere abroad to dozens of other producer countries that are more than happy to provide the world with natural gas.

As one of the world’s most stable, responsible and reliable energy exporters, Canada has an inherent responsibility to provide the world with the oil and gas it needs. If we don’t begin to develop our LNG industry now, other much less responsible autocratic nations with weaker protections for human rights and the environment will be happy to fill the void and reap the economic benefits (HINT: they already are). 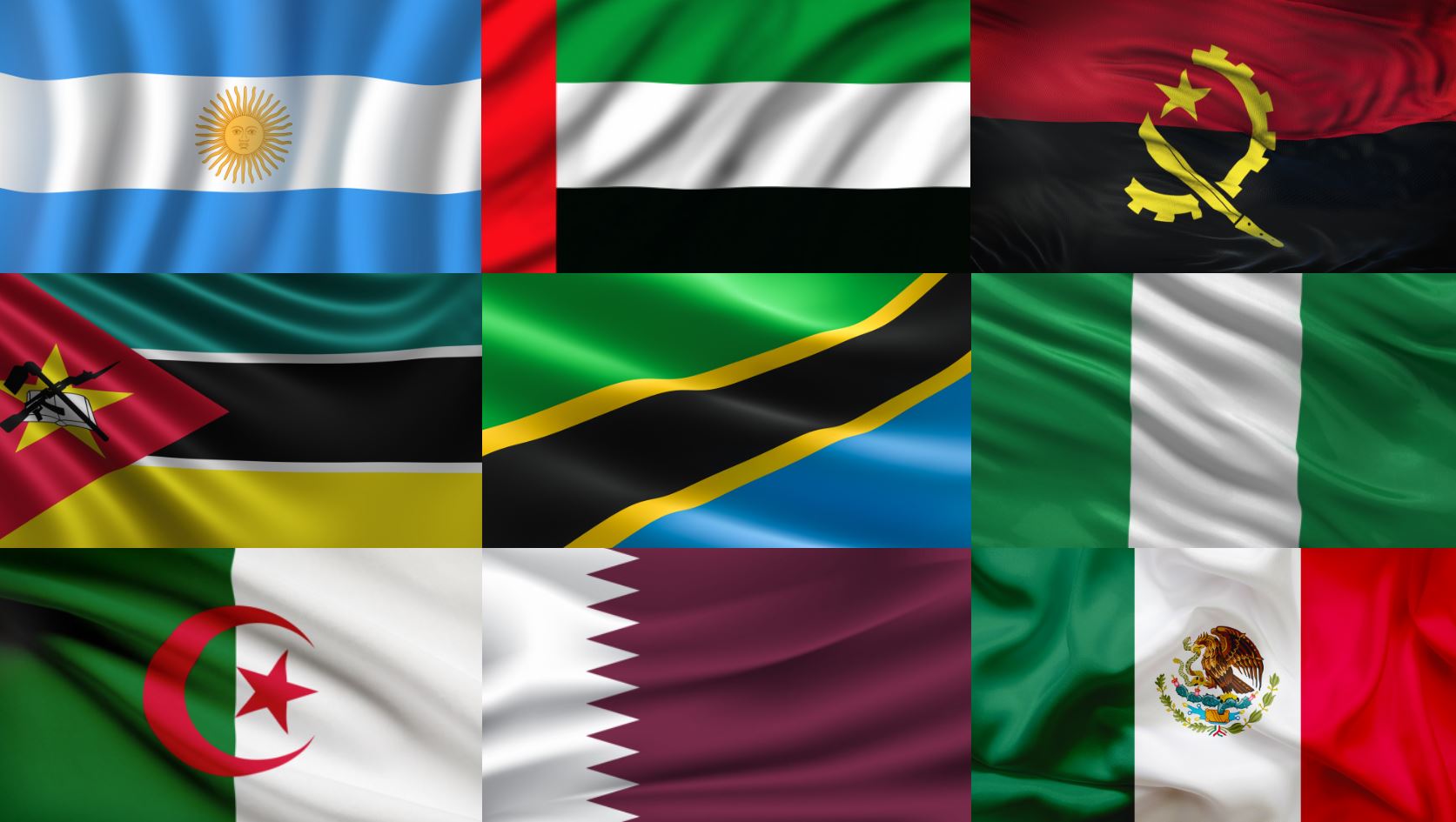 Is There a 'Business Case' for Canadian Liquefied Natural Gas? Just Ask These Countries.

Europe’s unfolding energy crisis and desire to find new sources of energy supplies has led to fierce debate about developing new liquefied natural gas (LNG) export terminals on Canada’s coastlines. The discussion raises the question: is there a “business case” for new Canadia... 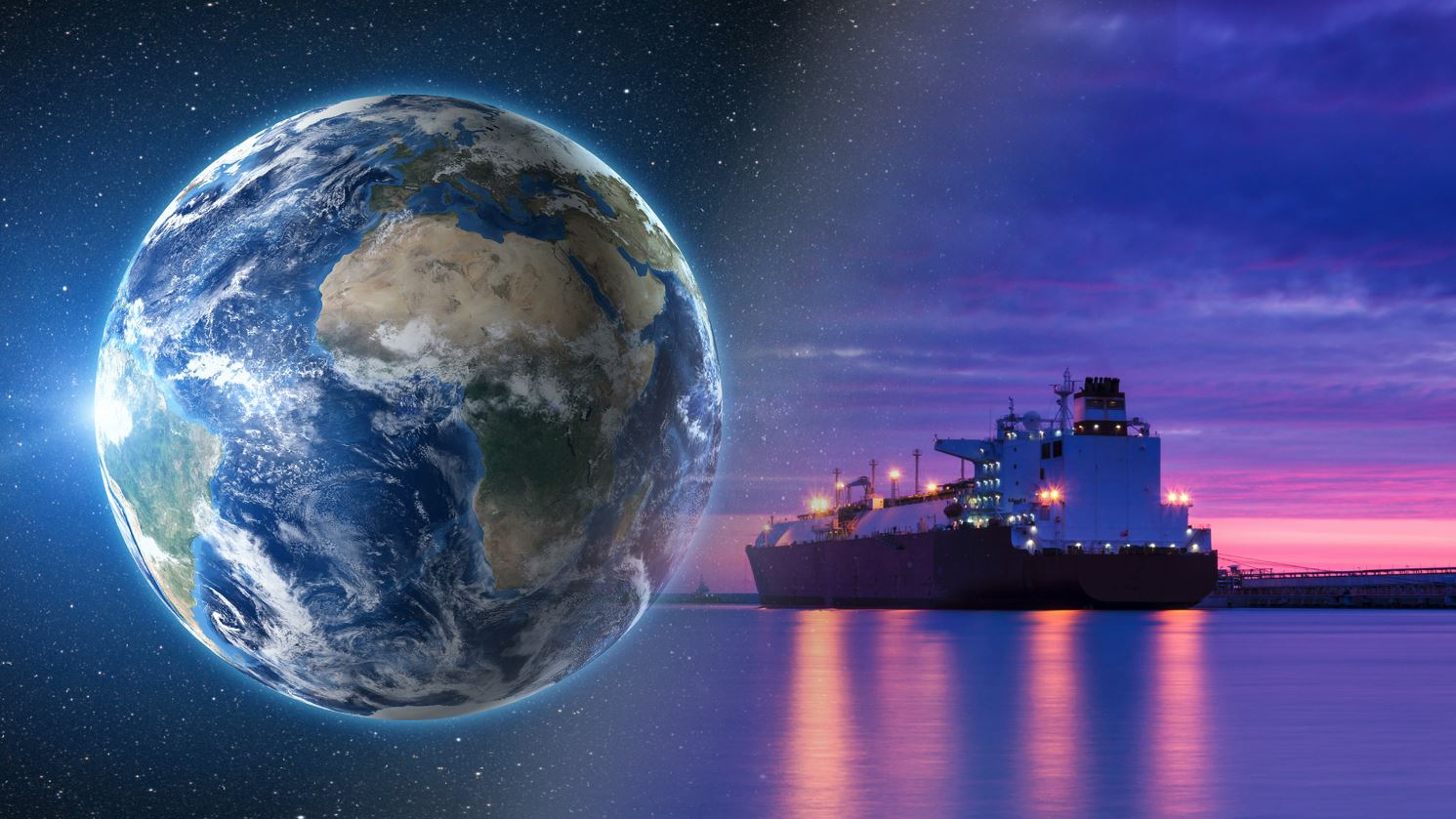 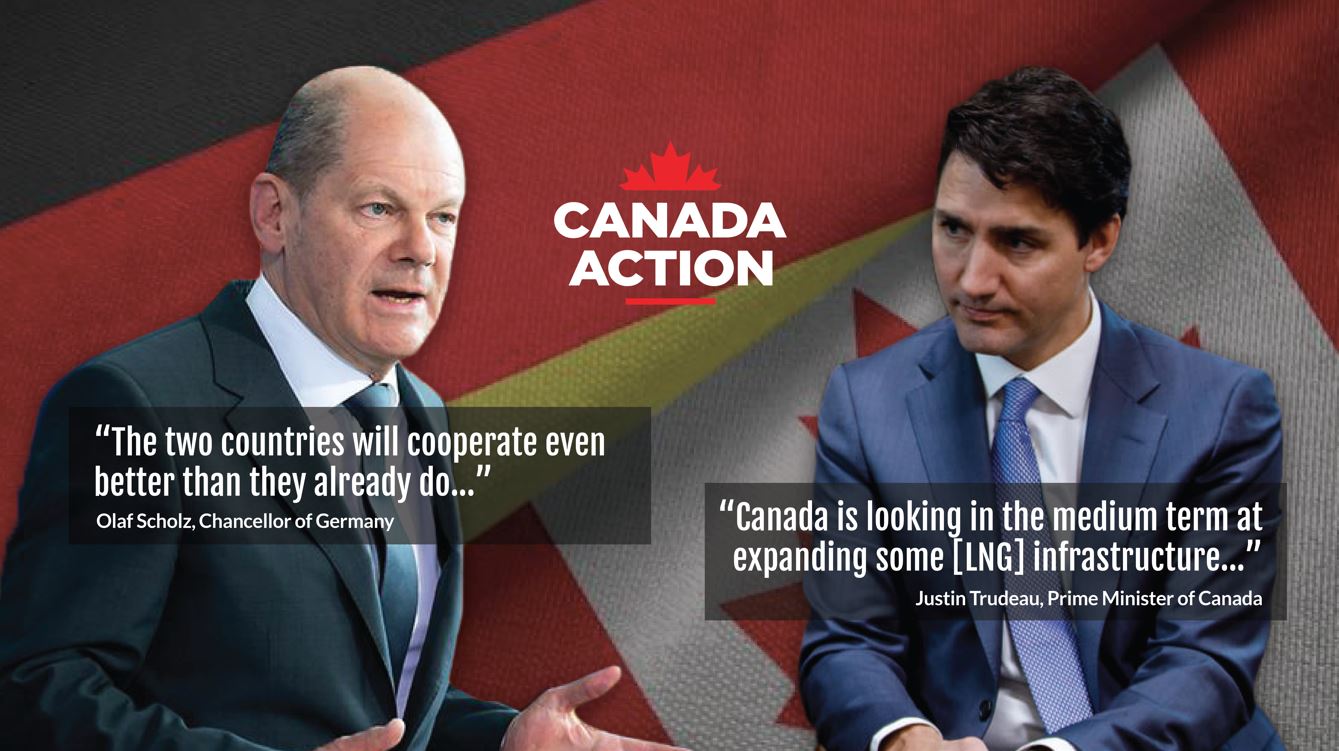