Fifteen Ways Sierra Club Got It Wrong on the Oil Sands

How many inaccuracies can you physically cram into a video that’s only one minute and 42 seconds in length?

Well, if the author of the video is the Sierra Club and the topic is the oil sands, turns out the answer is: quite a lot. By our count, there are at least 15 separate things in the film that at best have a complicated relationship with the truth – and, at worst, have never even laid eyes upon it. To wit:

(0:03 -0:09): “Oil companies want to build pipelines across America to carry tar sands crude from Canada to our coasts.”

FACT: Part of that is true: Companies like TransCanada are indeed interested in investing in America by building critical energy infrastructure needed in our country. But the Sierra Club makes it sound as if that hasn’t already happened. Pipelines connecting Canada and the U.S. have been on line fordecades, beginning in the late 1940s. Thanks to this established infrastructure, Canada currently provides two million barrels of oil per day to the U.S. via pipeline, according to the Canadian Energy Pipeline Association, making Canada our top supplier of imported oil.

For a more accurate visual of where Canadian oil is going within the U.S., disregard the video’s over-simplified map and check out this pipeline map from the Canadian Association of Petroleum Producers (CAPP) HERE.

(0:10-0:15): “The truth is these proposed pipelines won’t bring oil to America. They bring oil through America.”

FACT: According to the U.S. Energy Information Administration (EIA), in 2011, 99.7 percent of the crude oil produced in (or imported into) the United States was also consumed here, which means less than one-half of one percent (0.3 percent) was exported – and those exported products are generally not used in the U.S.. Additionally, 92 percent of all gasoline and diesel in the United States was refined and processed here. The U.S. Dept. of Energy even concluded that “there would be no economic incentive to ship Canadian oil sands [crude] to Asia via Port Arthur” without a surplus of heavy oil. Simply put, we import oil from Canada to satisfy our own demand – in a manner that’s secure, affordable and proximate to markets. 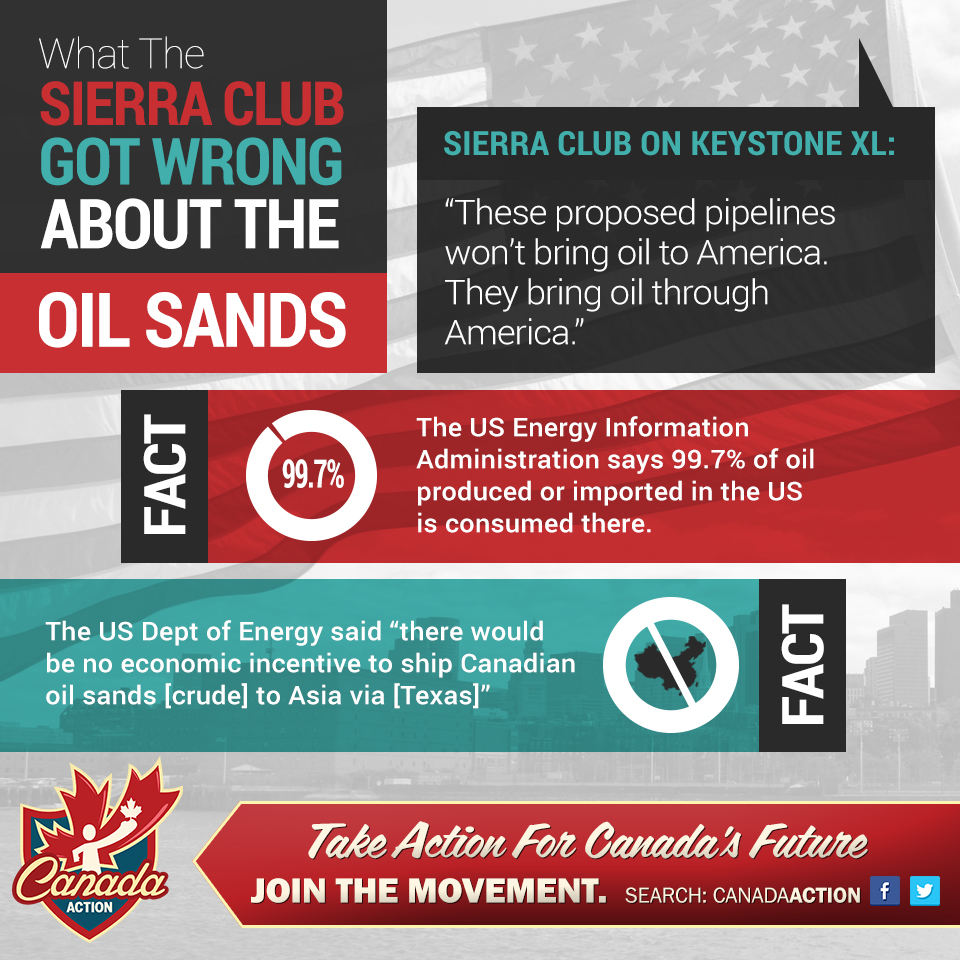 Second, Sierra Club’s preferred visual of bulldozers destroying the boreal forest is certainly eye-catching, but it’s simply not accurate. Here are the facts: Canada’s oil sands development has affected less than 0.2 percent of Alberta’s boreal forest. In fact, in Alberta alone, approximately 24 percent of the boreal forest (about the size of South Carolina) is under federal protection and can’t even be touched by production. Any land that is disturbed by production processes must be reclaimed by law. Thus far, over 67 sq. km have been reclaimed. 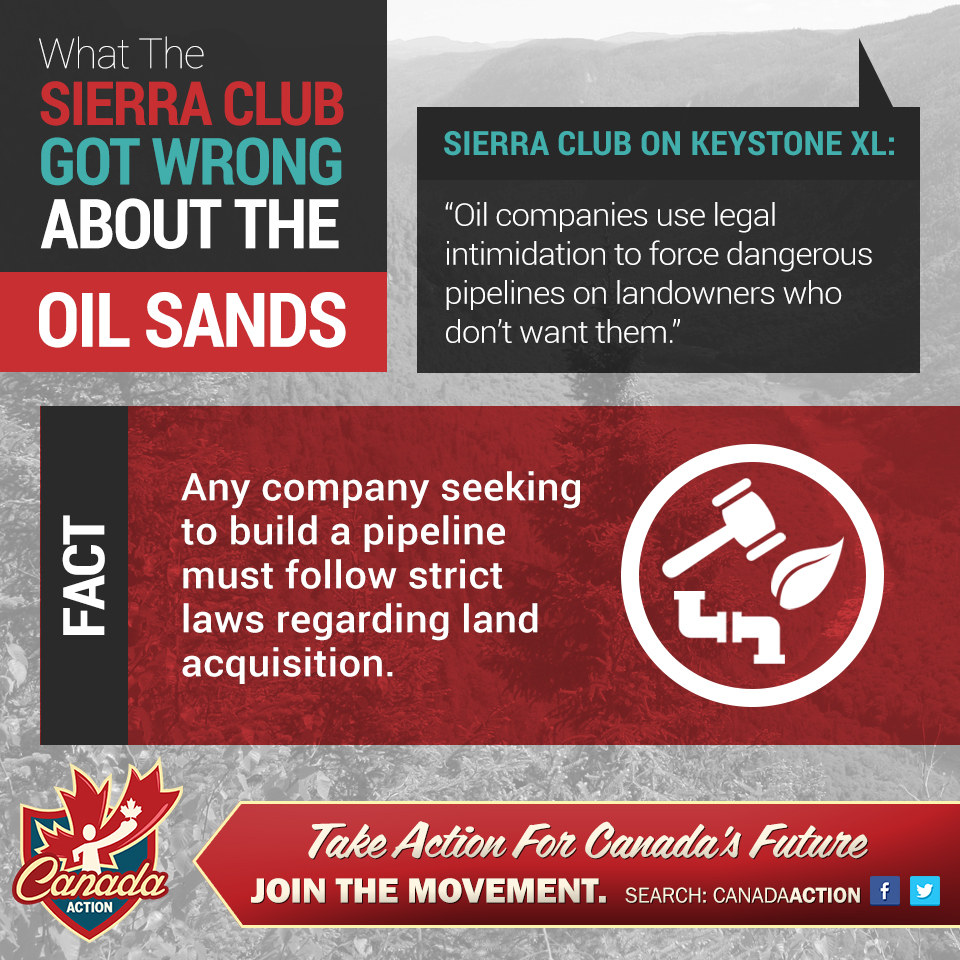 (0:20-0:29): “Oil companies have to heat the tar sands with toxic additives generating massive greenhouse gas pollution and dumping cancer-causing chemicals into the air and water.”

FACT(s): Lots to work with here, so we’re counting this as at least two inaccuracies and will just give you the rundown.

1) We have no idea what “toxic additives” are being discussed here. Naturally, Sierra Club doesn’t go into specifics. But we do know that the crude from the oil sands is liquefied by using steam – a generally un-imposing process by most standards.

2) The oil sands region makes up only about 6.5 percent of Canada’s overall GHG emissions and approximately 0.1 percent of the world’s emissions. That’s far from “massive.” On top of that, of the five leading oil exporters to the United States, only Canada has strict GHG regulations – the result of which has been an emission reduction of 29 percent since 1990.

3) Following a familiar (and irresponsible) playbook, anti-energy activists have sought to tie oil sands development to cancer for decades – notwithstanding findings from  the Royal Society of Canada  that “there is currently no credible evidence” linking anything related to the oil sands with elevated cancer rates. Furthermore, “[p]rojected additional emissions from expanded operations are not likely to change this expectation.” 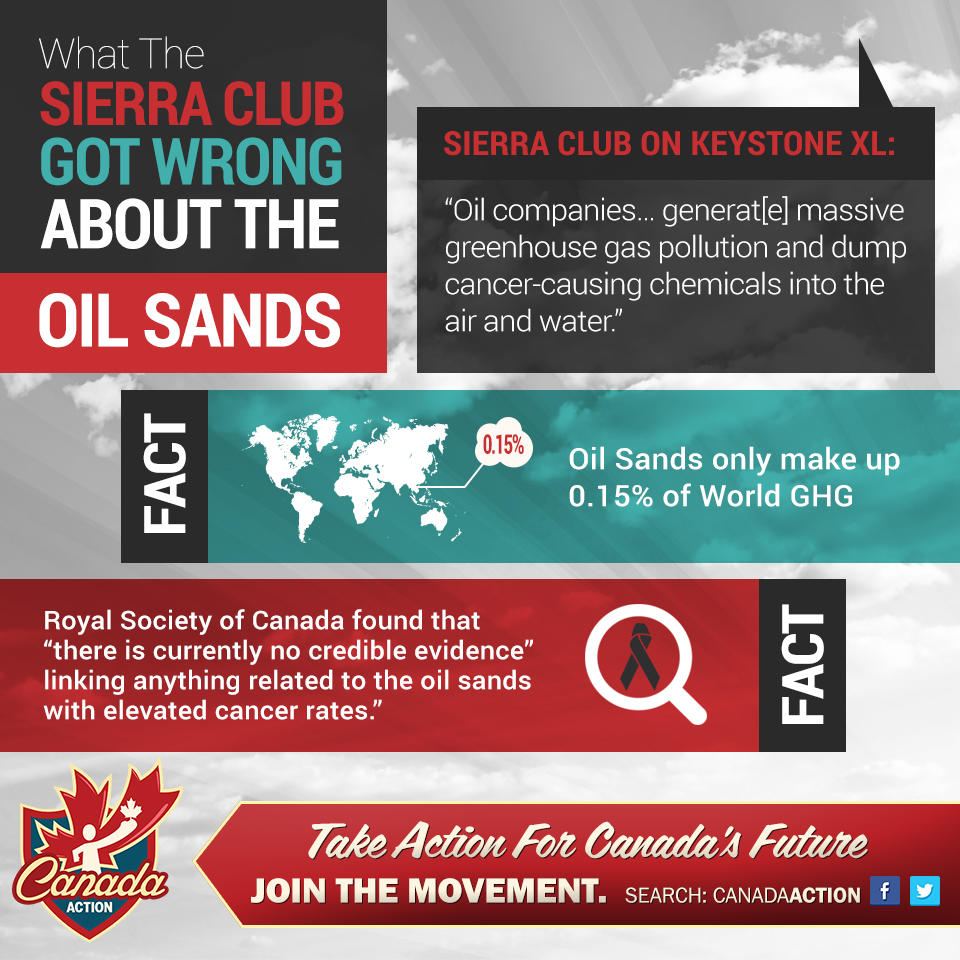 FACT: According to Alberta Innovates, a government-led initiative, prior to being transported via pipeline from the extraction site, oil sands crude is upgraded to a standard similar to other heavy crude oils commonly transported throughout the country, including heavy crude produced in California.

FACT: Oil derived from the oil sands does not pose a unique threat to pipelines. Before any oil is transported via pipeline, it must meet federally-mandated quality specifications in both the U.S. and Canada. Shocking, we know, but petroleum pipelines are actually constructed to specifications that ensure they can handle the intended operating pressure and the type of liquid that flows through them. In examining accident reports from PHMSA since 2002, no pipelines carrying Canadian crude have experienced releases resulting from internal corrosion.

FACT: Of course, there’s actually no such thing as an “[oil] sands pipeline,” at least one that’s separate and distinct from any other petroleum pipeline.  Truth is: pipelines carry various grades of oil from different sources and are not distinguished as oil sands or non-oil-sands lines. Oil sands crude may beupgraded prior to transportation or diluted to enable flow. But once it is, guess what? It’s just oil – the same stuff that you’d encounter anywhere else, with virtually the similar profiles. Pipelines are heavily regulated and any oil placed into the pipeline has to meet the same standards.

We think that Sierra Club is trying to reference supposed spills on TransCanada’s original Keystone pipeline. Those 12 spills came at pumping stations and were responded to promptly.

(0:47-0:54): “Spills pollute waterways in critical underground aquifers and can put crops and drinking water for millions of Americans at risk.”

FACT: In examining potential health issues associated with oil sands development in the Athabasca region, the Royal Society of Canada concluded that “current evidence on water quality impacts on the Athabasca River system suggests that oil sands development activities are not a current threat to aquatic system viability.” In the case of the proposed Keystone XL (KXL) pipeline, billions of barrels of crude oil are being safely produced and transported across the Ogallala Aquifer by existing pipelines. Sierra Club’s claim is speculative, if not alarmist.

(0:54-0:59): “Oil companies use legal intimidation to force dangerous pipelines on landowners who don’t want them.”

FACT: Any company seeking to build a pipeline must follow strict state laws regarding land acquisition. There is no “intimidation,” only the law.

Again, Sierra Club tends to lump all landowners under the same umbrella of pipeline-haters. You might be surprised to hear it, but, as it turns out, the truth is quite a bit different. Here’s what a Montana rancher who lives along the proposed KXL line told the Billings Gazette, “We’re not worried about it at all … When they come in to put it in you hardly know they are there. When it’s done you don’t even know they were there.” 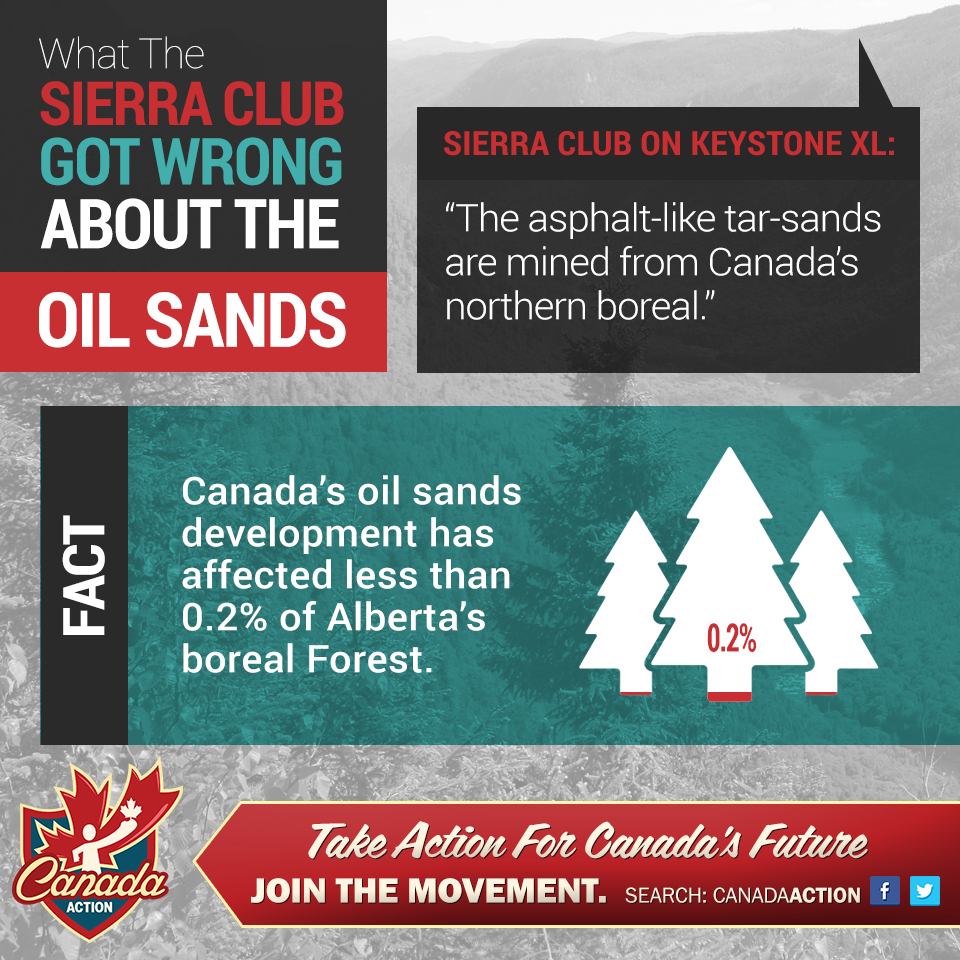 FACT: We’re getting to the end, and at this point, they’re clearly running out of material. See our response above.

FACT: Ditto. See our response at the top of the page.

(1:09-1:17): “Americans take on all the risk while oil companies collect all the rewards – the huge profits Big Oil uses to buy more influence in Washington, D.C.”

FACT: There’s no denying the simple (and irrelevant) truth that an element of risk exists anytime humans decide to do, well, anything. And yes, building a $7 billion transcontinental oil pipeline is not immune from that reality.

That said, Americans are taking on benefits, not risk, with increased production and transportation of Canadian oil sands crude. According to a 2011 study by the Canadian Energy Research Institute (CERI), for every two jobs created in Canada from oil sands development, approximately one is created in the U.S. Increased investment in Canadian oil sands development will create more than 500,000 new U.S. jobs and generate $775 billion in GDP by 2035.

FACT: True, we need all kinds of energy – renewables included — to meet what every single serious analyst predicts will be continued growth in world energy demand. But according to the Energy Information Administration, the U.S. will increase oil imports by 21 percent more in 2035 than in 2009. Even doubling the amount of renewable energy consumed in the U.S. would not be enough to match current oil consumption rates.

FACT: The oil sands may not be welcomed by the Sierra Club, but Americans are all for it. According to a March Gallup poll, Americans support the construction of KXL by nearly a 2-1 margin. Regardless, this resource is being produced and Canada will seek other customers if we don’t seize the opportunity KXL can provide.