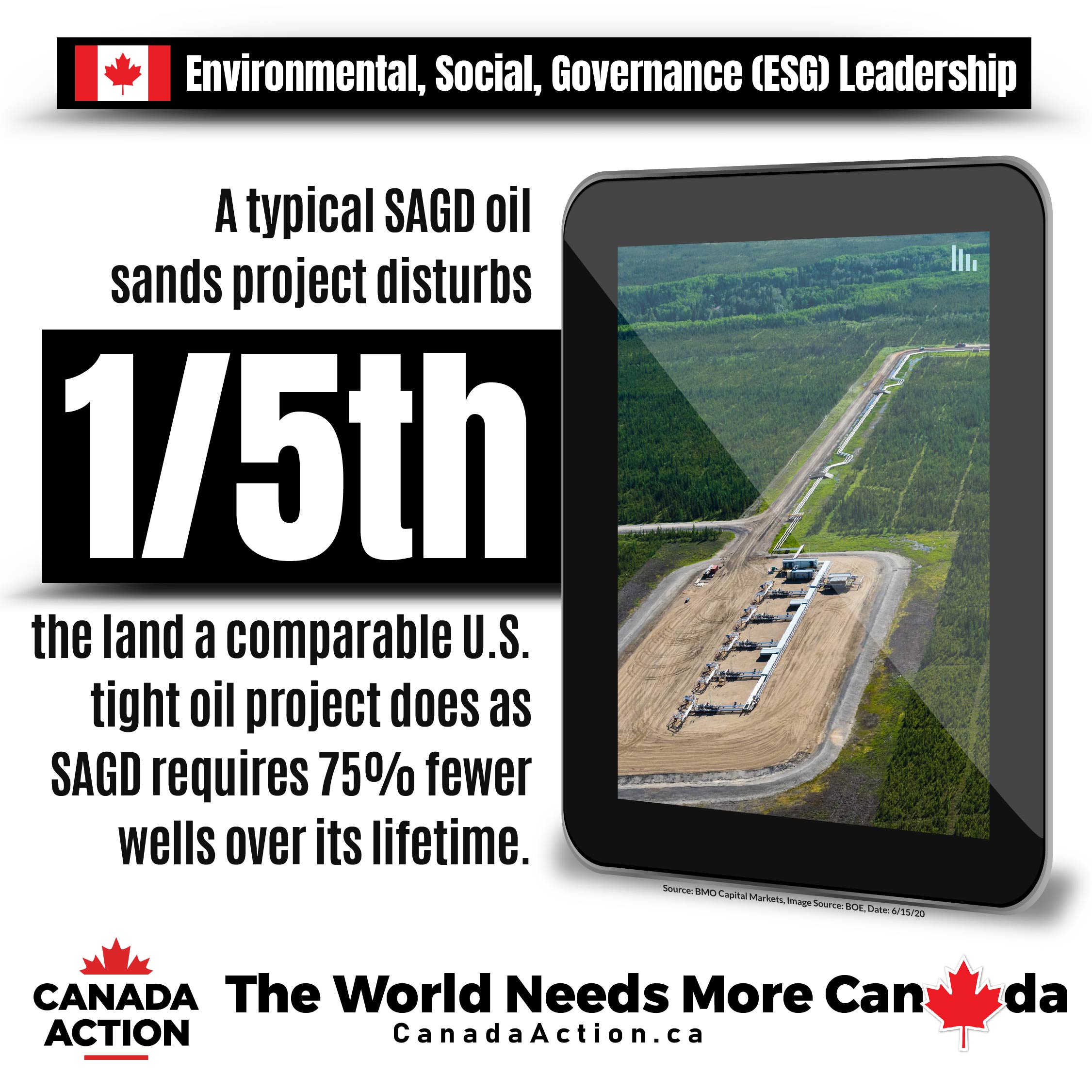 Did you know that Canadian oil and natural gas producers are continually finding ways to improve on their environmental performance?

But don’t take our word for it. Here are several specific examples of how Canada's oil and gas producers are taking action to reduce their environmental footprint. 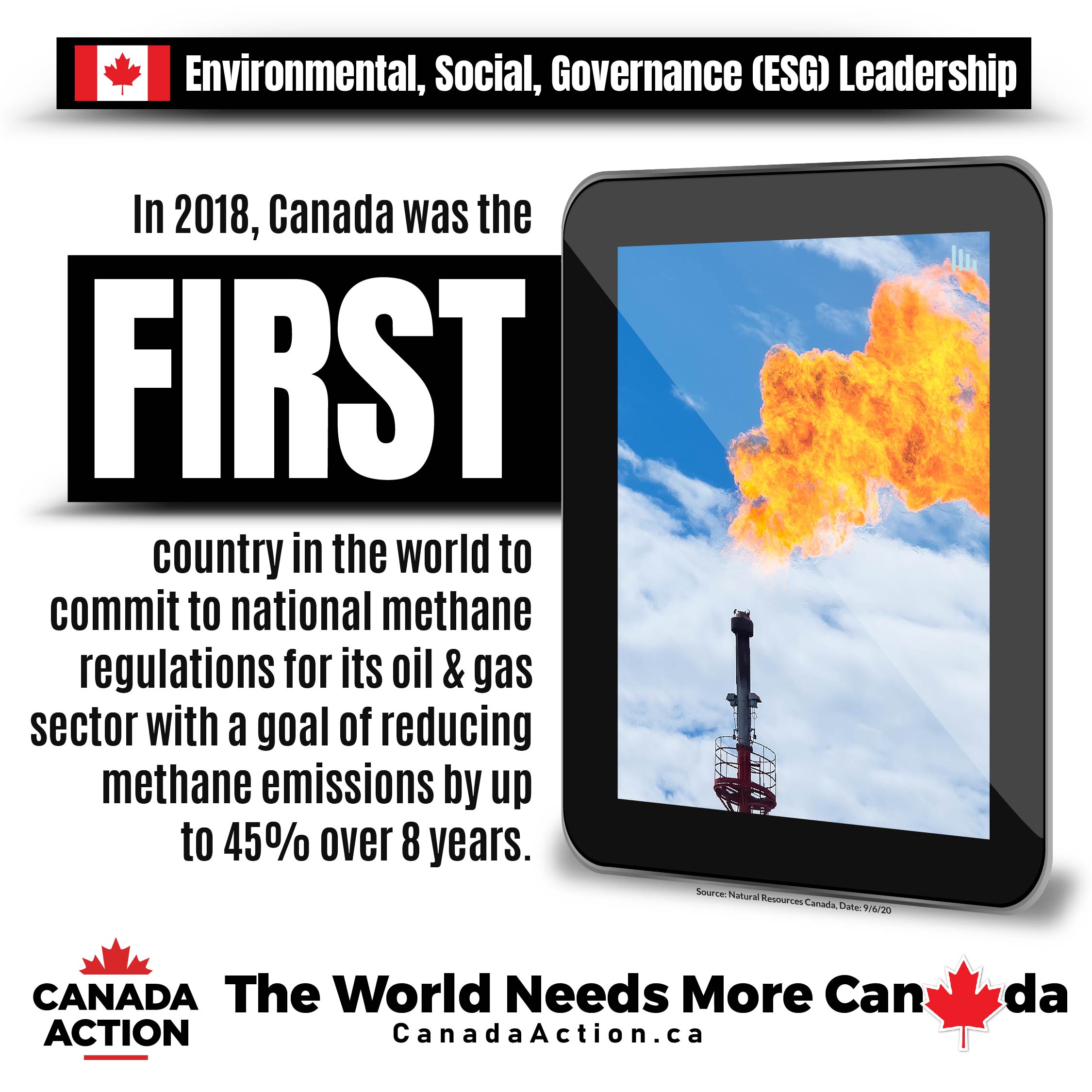 #2 - Canada ranks #2 for social and governance, and #4 for environmental practices among the world’s top 20 oil producers (BMO Capital Markets)

#3 – In 2018, Canada was the first nation in the world to commit to a 45% reduction in methane emissions from oil and natural gas production vs. 2012 levels by 2025 (Natural Resources Canada)

#4 – Of the world’s top 10 oil exporters, Canada is the only nation that has a price on carbon emissions (CA)

#5 - In 2007, Alberta was the first jurisdiction in North America to take climate action with mandatory GHG emission reduction targets for industrial emitters across all sectors (Government of Alberta)

#6 - Since 2009, Canada’s oil sands sector has invested more than $9.3 billion into research and development – notably higher than other major global oil producers on a per-barrel basis (BMO Capital Markets)

#7 – Strict regulations make it mandatory for all land disturbed by oil and gas operations must be 100% reclaimed to a natural, self-sustaining state (Natural Resources Canada)

#8 - Since 2000, gas flaring in Alberta has dropped by 57%, making Canada one of the lowest gas flaring oil producers globally (BMO Capital Markets)

#10 - By 2030, upstream oil sands emissions intensity is expected to decrease 30% below 2009 levels as a result of continued innovation towards cleaner and more efficient processes (IHS Markit) 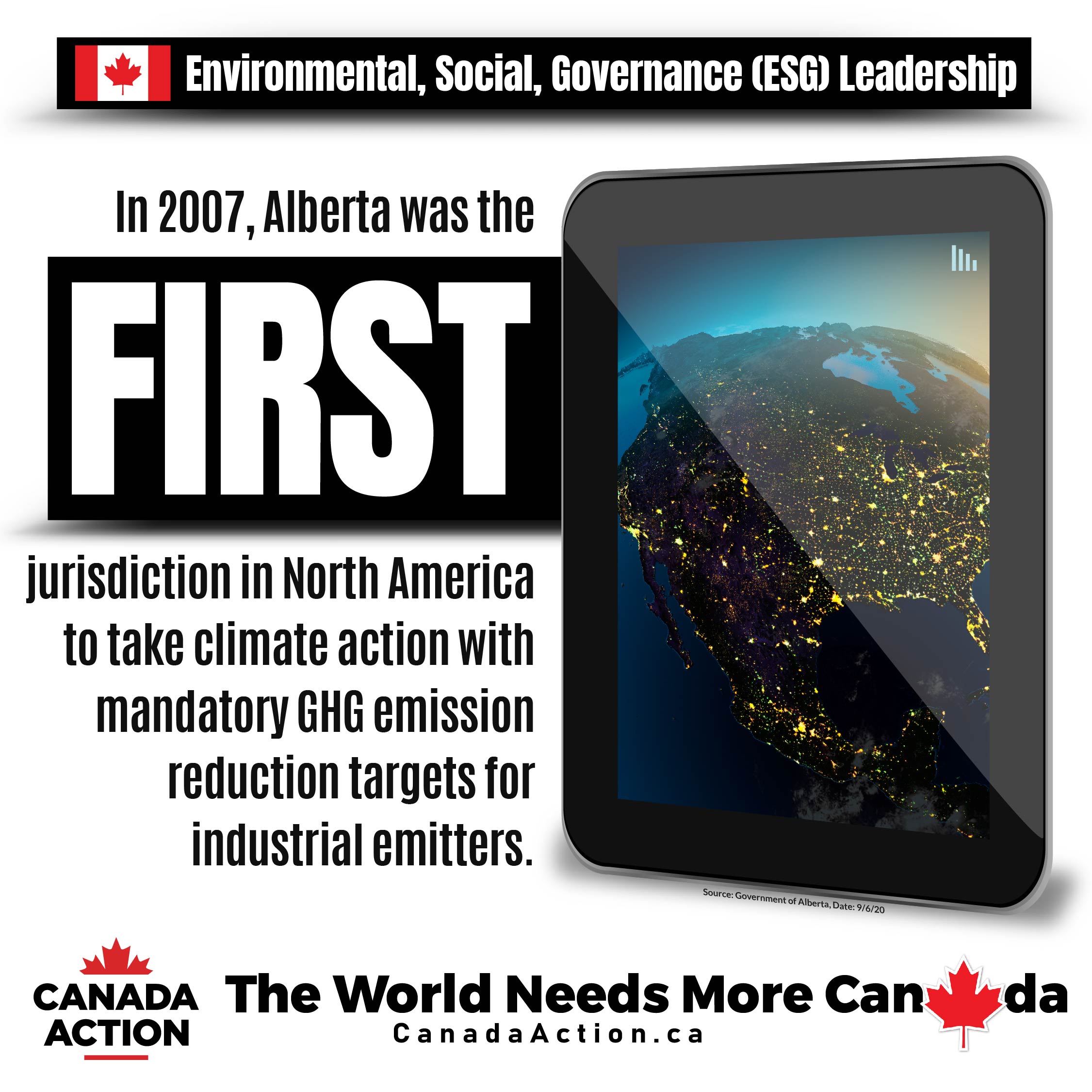 #13 - Since 2011, upstream in situ oil sands emissions intensities have dropped by 12% (TD Securities)

#16 – In 2018, The Alberta Energy Industry’s oil and gas extraction operations used just 0.21% of the total amount of nonsaline water available to them in the province (Alberta Energy Regulator)

#17 – In 2018, only 12% of nonsaline (fresh) water assigned to all industries in Alberta was designated for oil and gas extraction; the industry used 25% of it’s allocation.

#18 - Canada’s oil and gas industry is by far the largest spender on clean technology in Canada, accounting for 75% of the $1.4 billion spent annually (Financial Post)

#19 - In 2016, Canada’s oil and gas industry spent $3.7 billion on environmental protection, or about 44% of total spending by all sectors that year (Statistics Canada)

#20 - Between 2006-2016, Canada’s oil and gas sector spent $24.5 billion on environmental protection, by far the most of any industry in Canada and 4x higher than the next highest spender, the power generation sector (Statistics Canada)

#21 – Canada’s Oil Sands Innovation Alliance (COSIA) was founded in 2012 with the goal of bringing competing oil and gas producers together to collaborate on clean tech, innovation and other initiatives to improve overall environmental performance. This type of organization is unique to the world; no where else will you see collaboration coming first before competition to improve environmental performance.

#22 – To date, COSIA has spent more than $1.7 billion on research and development to improve environmental performance across Canada’s oil and gas sector (COSIA) 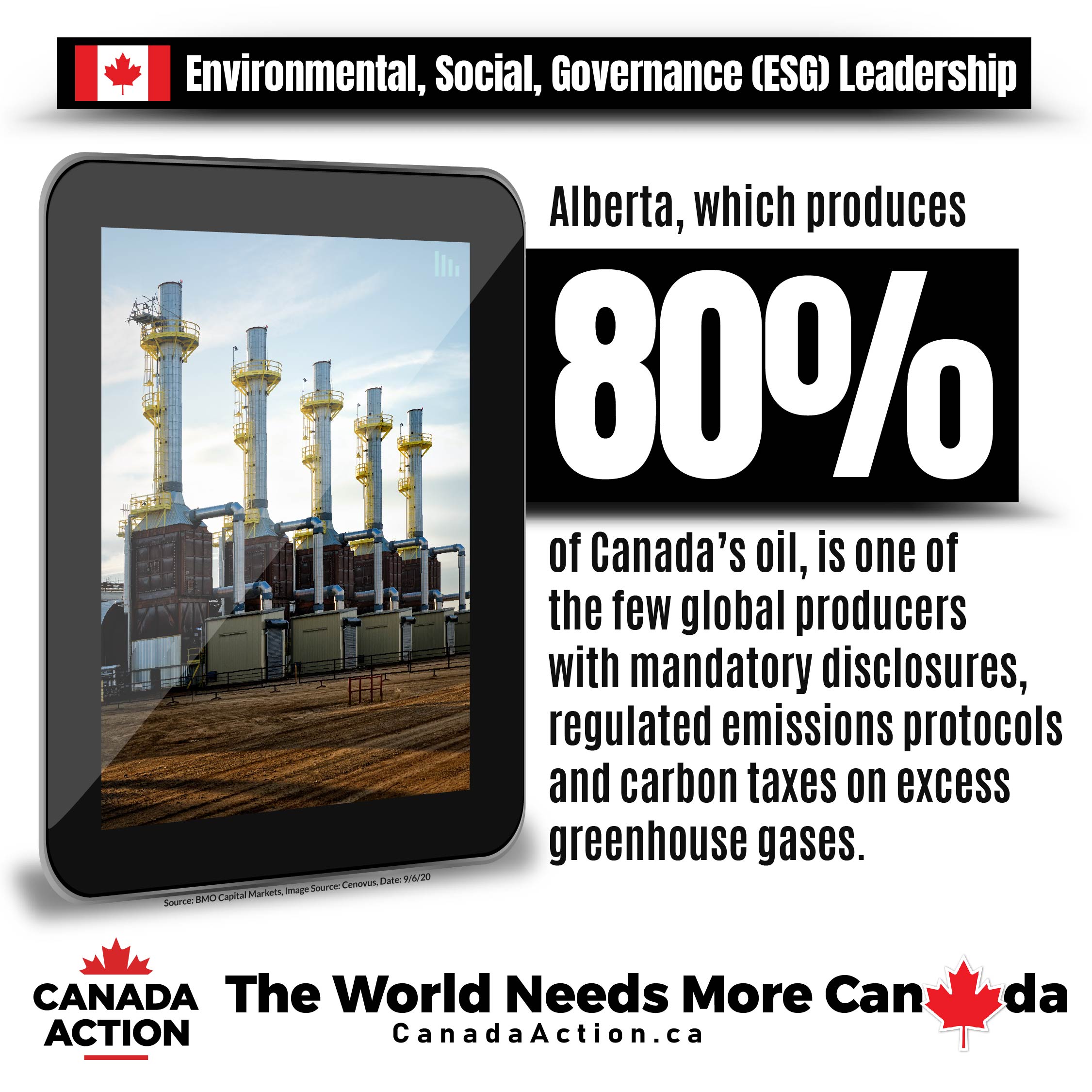 #2 - In 2019, Cenovus started an equipment conversion program which has reduced methane emissions by approximately 50,000 tonnes of carbon dioxide equivalent (Cenovus)

#9 - Suncor will also prevent roughly 0.4 megatonnes per year of GHG emissions at its newly sanctioned Forty Mile Wind Power Project, equivalent to taking 85,000 cars off the road each year (Suncor) 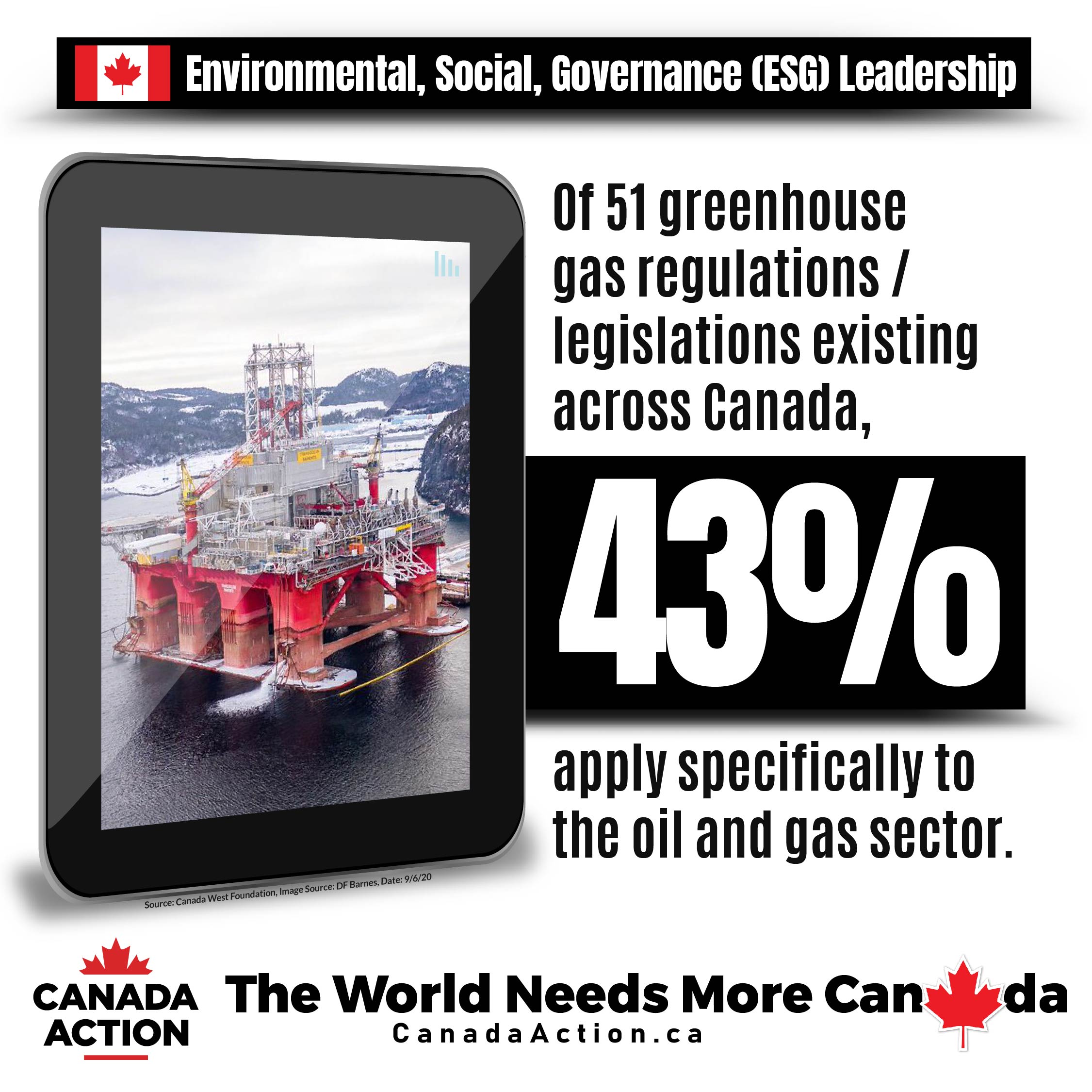 #13 - Between 2014-2018, CNRL conserved 16.8 megatonnes of CO2 equivalent from being released into the atmosphere as a result of its solution gas conservation projects – the same as removing about 3.6 million cars from the road (CNRL)

#14 - Between 2010-2018, CNRL reclaimed 8,193 hectares of land in North American exploration and production areas, equivalent to the size of about 10,000 Canadian football fields (CNRL)

#15 - In 2018, CNRL accomplished the goal of planting 1 million reclamation trees at its Horizon oil sands mine (CNRL)

#18 - In 2018, MEG recycled over 90% of the water recovered from reservoir operations to produce steam for use in situ (MEG) 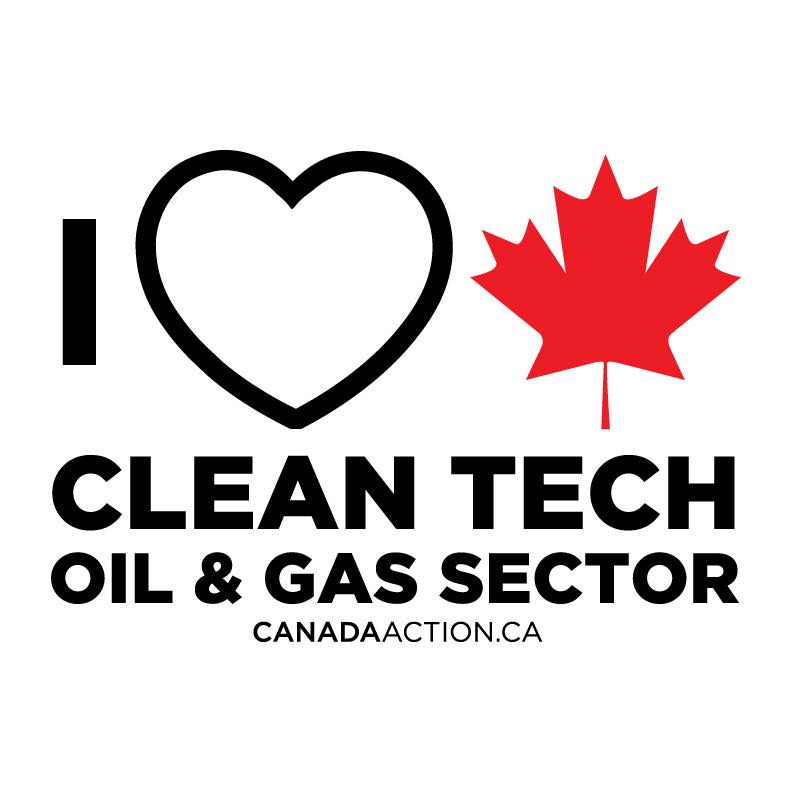 We will be working towards extending this epic list of facts on environmental leadership in Canada’s oil and gas sector very soon!

Until then, we would love for you to join us on Twitter, Instagram and Facebook to stay updated on developments related to Canada’s natural resource sector. We hope to see you there!