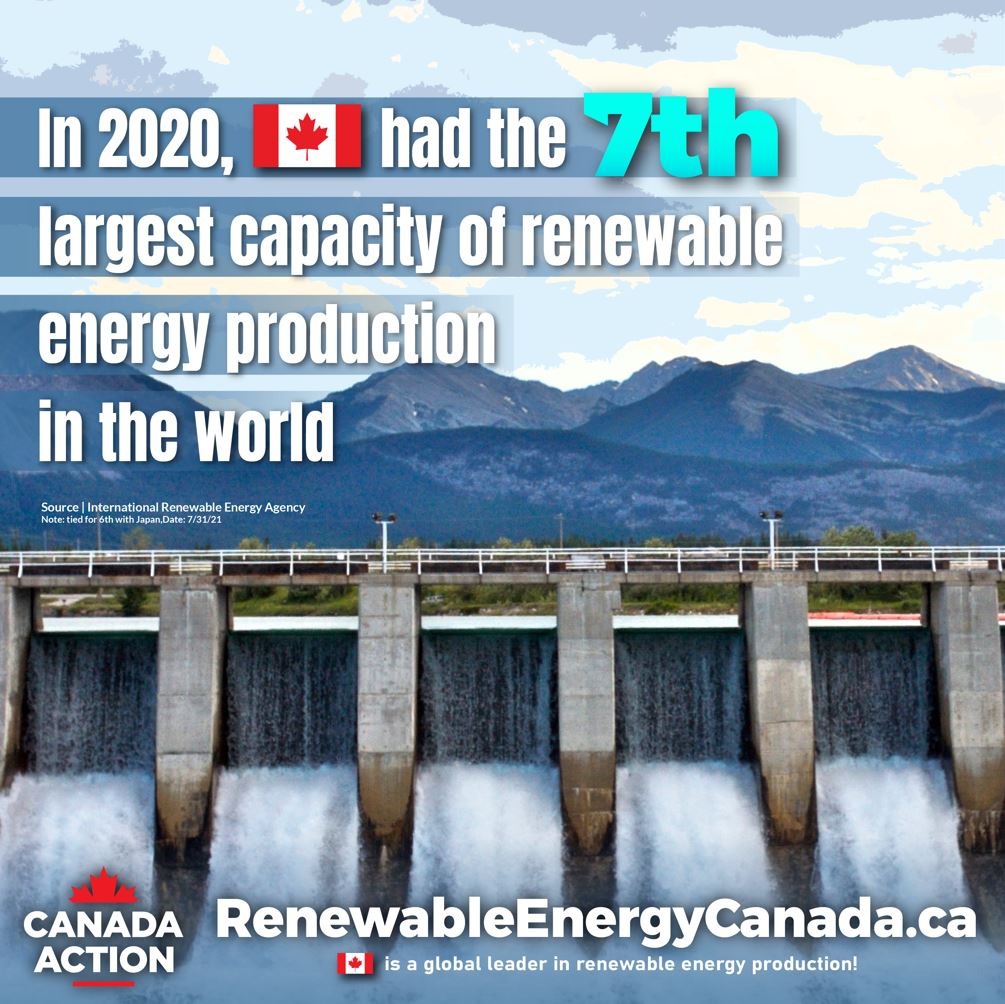 Did you know that Canada is a global leader in renewable energy and has been for many years? As the second-largest country in the world, Canada's diversified geography has substantial renewable resources such as moving water, solar, wind, biomass, geothermal and coastal tides that can be utilized to produce energy.

Not many Canadians know that our nation already gets 67 per cent of its electricity demand from renewables, or that more than 16 per cent of our country's total primary energy supply is from renewable sources which is much higher than the average among OECD nations. And we haven't even touched the tip of the iceberg of facts regarding renewables in Canada, so don't go anywhere just yet.

We've coaxed over as many sources as we could find to compile a gigantic list of renewable energy facts in Canada, some of which you may be surprised to learn about. Here we go! 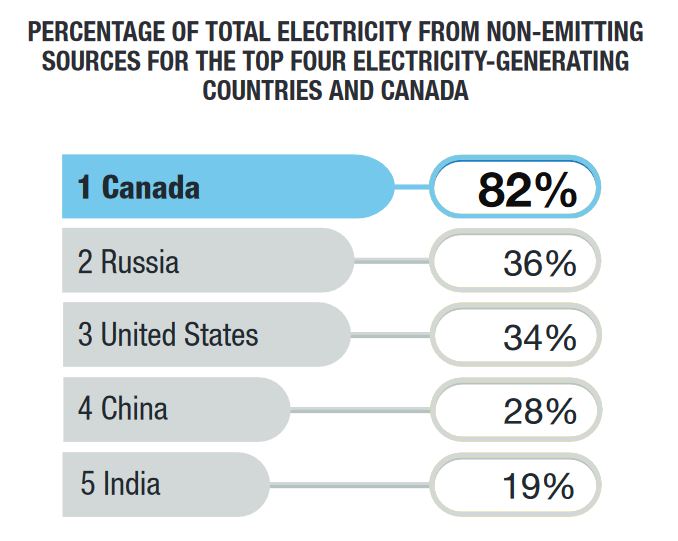 #1 - Compared to the top four electricity-generating nations of the world (above), Canada gets a much larger share of its own total electricity demand from renewable sources (NRC)

#3 - Canada currently gets about 67 per cent of its electricity needs from renewable sources such as wind, solar, hydro, and biofuels (NRC)

#5 - Between 2010 and 2018, renewable electricity generation across the country increased 16 per cent, with wind and solar having the largest growth (NRC)

#6 -  As a net exporter of electricity with the most generation coming from non-emission sources, Canada helps eliminate millions of tons of CO2 emissions annually by displacing more GHG-intensive generation in the United States (Canada Hydro)

#8 - From 2000 to 2018, emissions from electricity production decreased by 50 per cent in Canada largely as a result of transferring generation to renewable sources (NRC)

#9 - Canada was the world's 3rd largest exporter of electricity in 2018, most of which is generated by renewables (NRC) 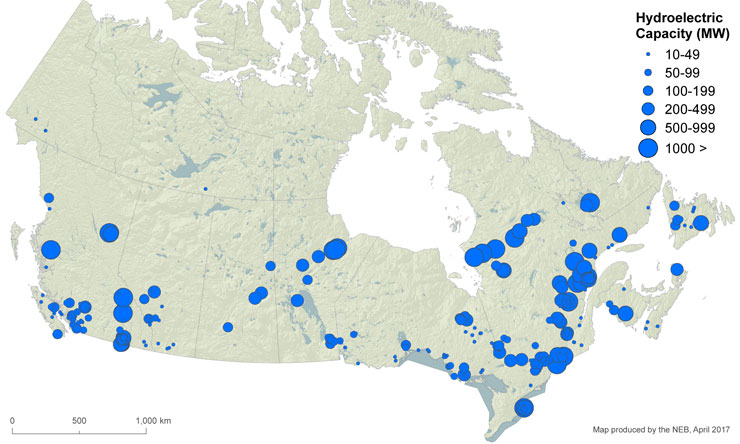 #13 - Water is the most important renewable energy source in Canada, accounting for roughly 60 per cent of our nation's total electricity generation supply

#15 - Canada has been developing its water resources to produce clean, sustainable, reliable and affordable electricity for nearly 140 years (IHA) 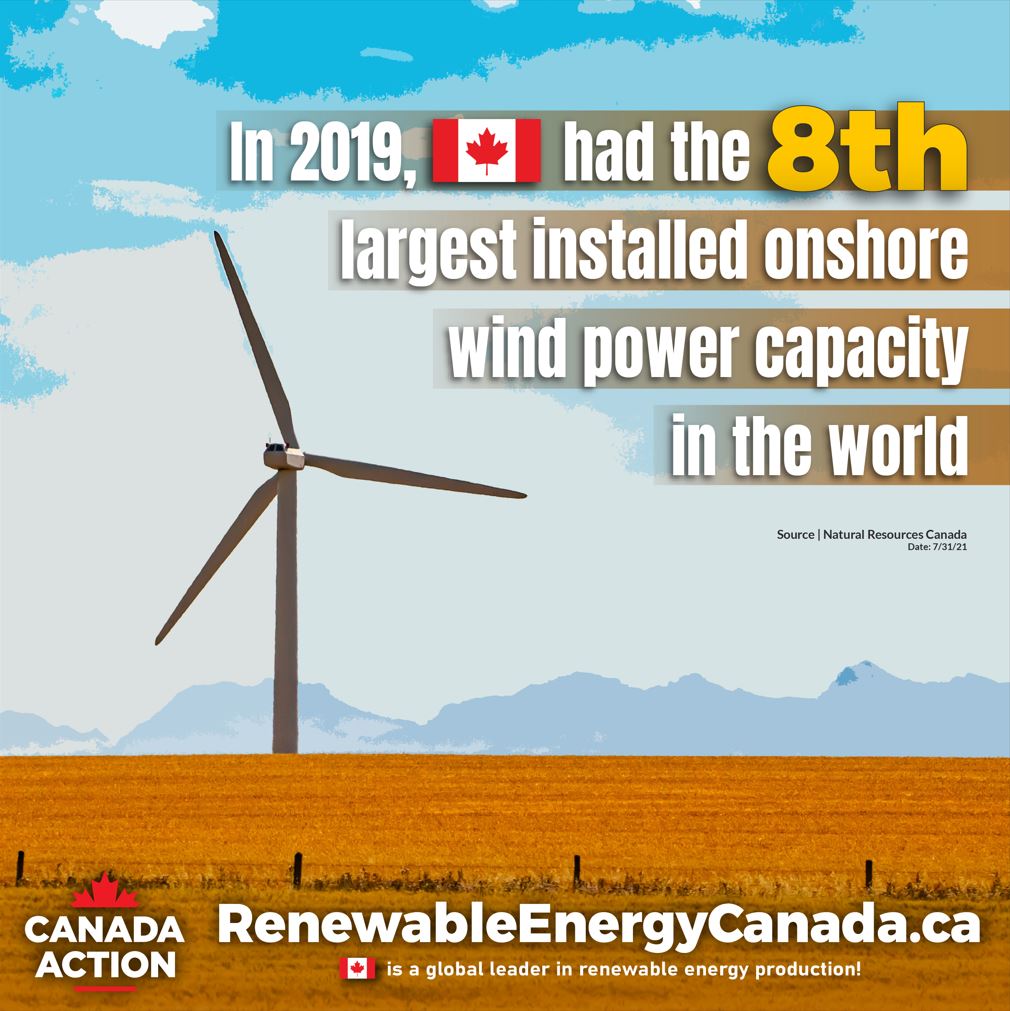 #16 - In 2019, Canada had the 8th largest installed onshore wind power capacity in the world (NRC)

#19 - As of December 2020, Canada was home to 307 wind farms including a few projects in the northern territories (CREA)

#20 - By the end of 2018, Canada had approximately 12,816 MW of installed wind capacity, generating enough electricity to power about 3.3 million homes – or 6 per cent of the country’s total electricity demand (CANWEA)

#21 - In 2018, six major wind farms were completed that represented over $1 billion of investment and added 566 MW of new installed capacity to Canada’s renewable electricity grid (CANWEA) 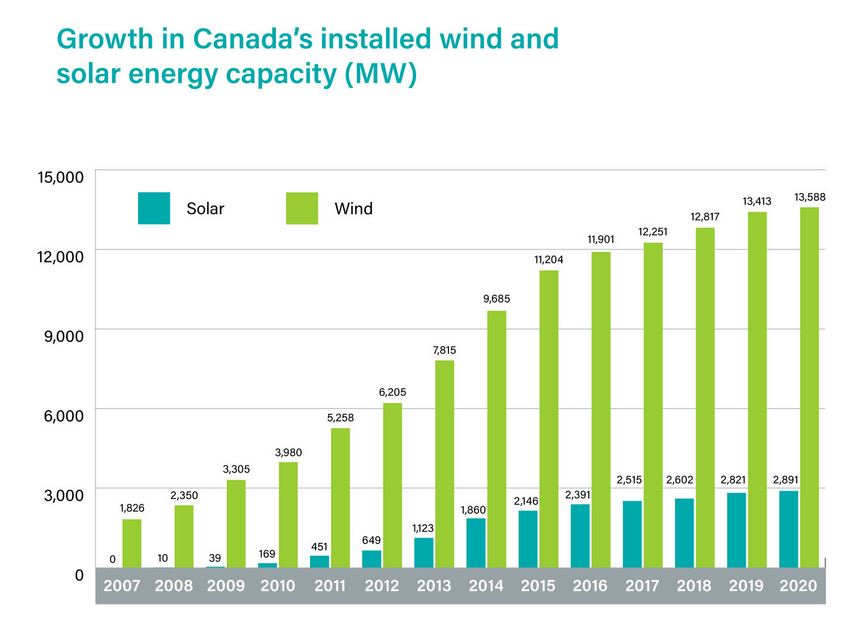 #25 - In 2019, the wind power sector in Canada directly benefited more than 299 communities in 12 provinces and territories, including involvement with more than 35 Indigenous communities (CANWEA)

#28 - There are more than 43,000 solar energy installations across the country (CREA)

#30 - The largest solar power project in Canada is currently underway in Alberta, which will generate enough electricity to power 100,000 homes when operational

#30 - More than 23 per cent of Canada's total renewable energy production is generated by solid biomass, second only to hydro (NRC)

#31 - In 2018, Canada was home to 36 operational co-generation units at pulp and paper mills and had 41 Independent power providers using biomass (NRC) 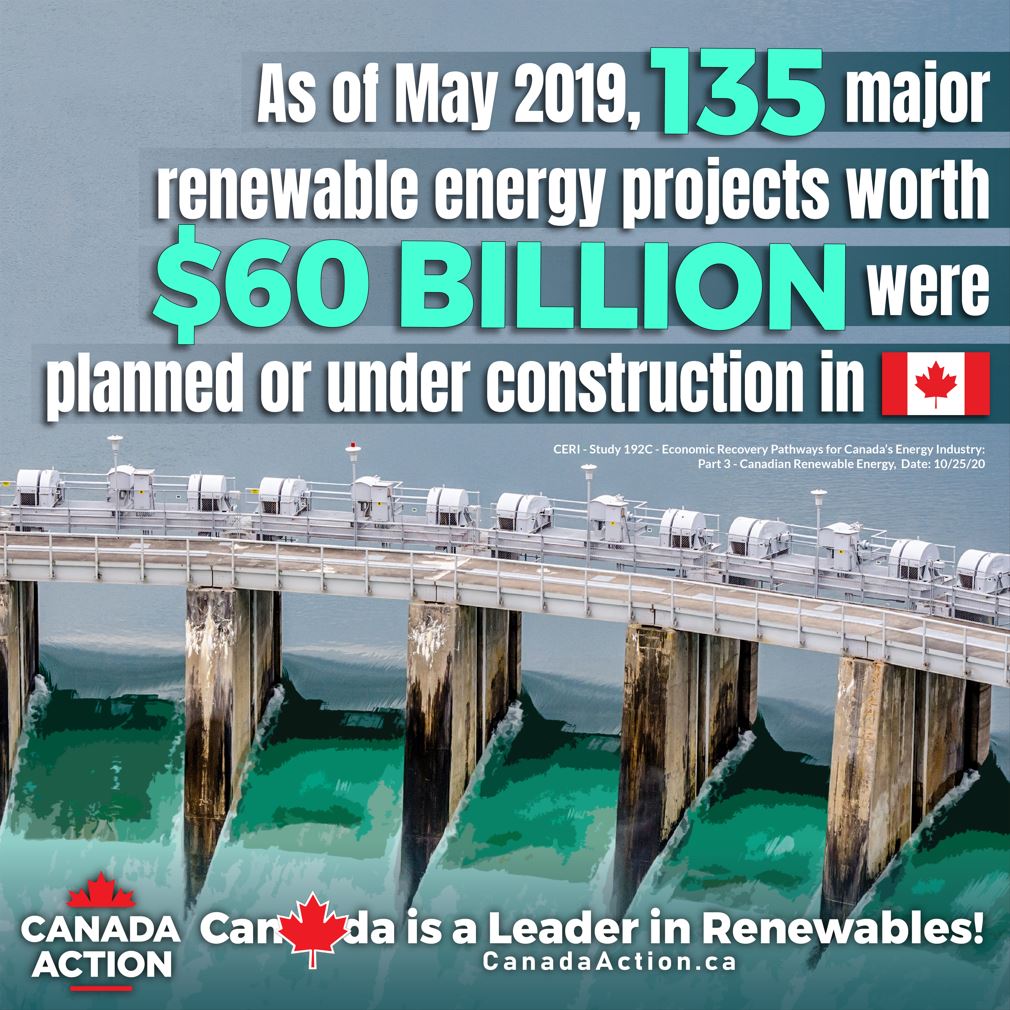 #35 - Site C is a new hydro facility which upon completion will add another 1,100 MW of generating capacity to the province’s already expansive renewable portfolio (CER)

#38 - Between 2005 and 2015, biomass capacity in British Columbia grew by 9 per cent while accounting for about 6 per cent of total electricity generation in 2016 (CER) 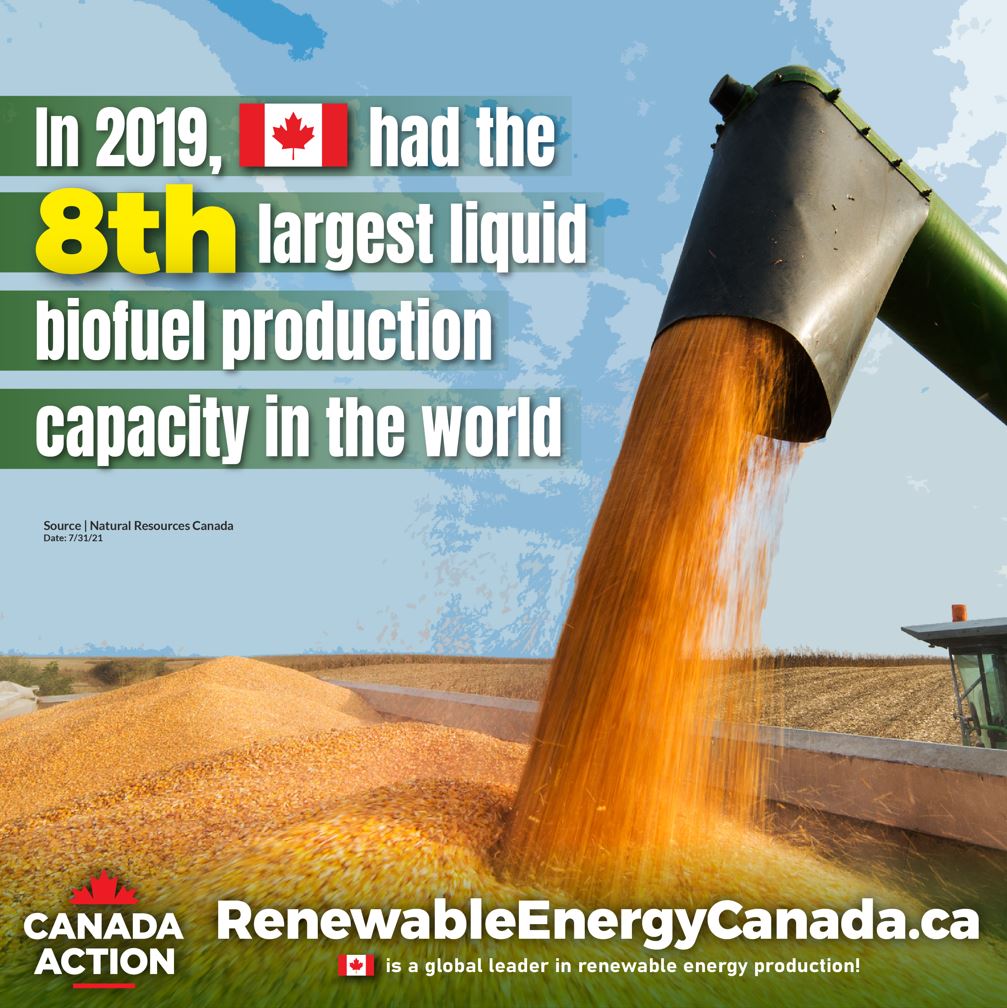 #39 - By 2025, Alberta is projected to be the leading province in both wind and solar capacity across Canada (CBC)

#40 - In 2016, Alberta generated approximately 12 per cent of its total electricity generation, about a two-fold increase from a decade prior (CER)

#41 - In 2014, Western Canada’s largest wind farm was built in Alberta, resulting in GHG emission reductions equivalent to taking 120,000 cars off the road per year (CANWEA)

#42 - A handful of new solar power farms are planned or underway in Alberta which together will generate nearly 650 megawatts of added renewable electricity and introduce emission reductions equivalent to removing well over 150,000 cars off the road per year (Greengate Power, Berkshire Hathaway, Obton A/S)

#43 - Alberta currently is home to the 3rd largest wind capacity in Canada with 37 projects generating about 1,500 MW of electricity each year (CANWEA) 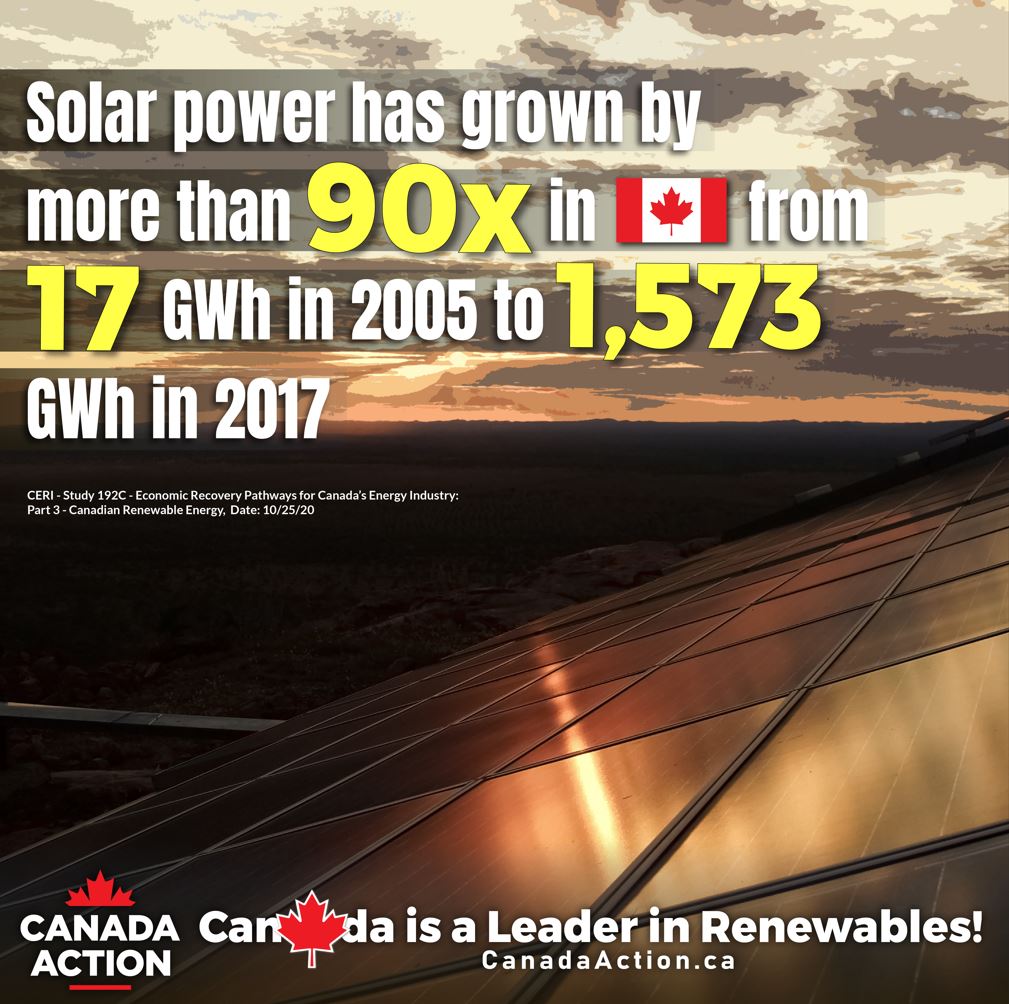 #44 - In 2016, Saskatchewan got approximately 17 per cent of its total electricity generation from renewable sources with hydro and wind accounting for the lion’s share (CER)

#45 - In 2015 SaskPower, Saskatchewan’s principal electric company which owns most capacity generation, set a target of 50 per cent renewable power by 2030 (CER)

#48 - Manitoba has one of the lowest greenhouse gas-intensive electricity generation in the country, with just 3.4 grams of GHG per kilowatt-hour (kW.h), versus the nationwide average of 140 grams of GHG/kW.h 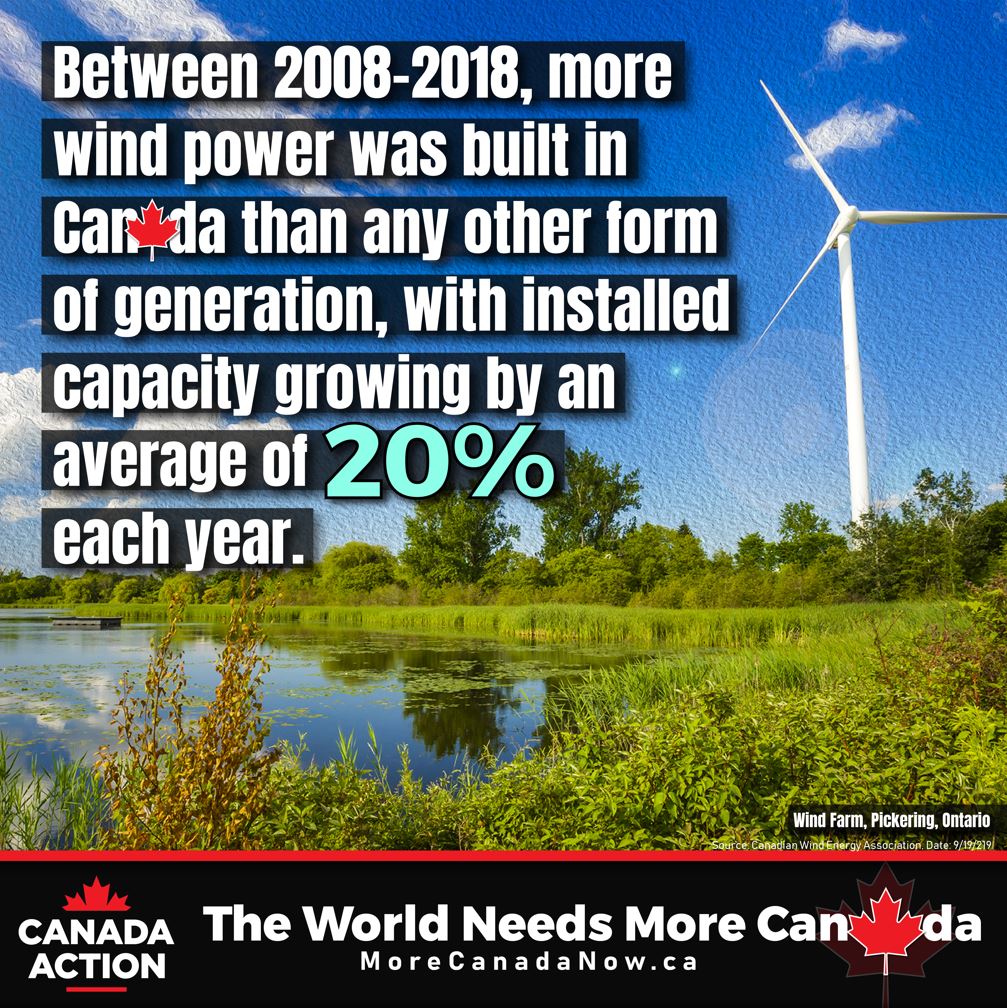 #51 - Solar and wind generation increased from nearly zero in 2005 to about 2 and 6 per cent of total generation by 2015, respectively (CER) 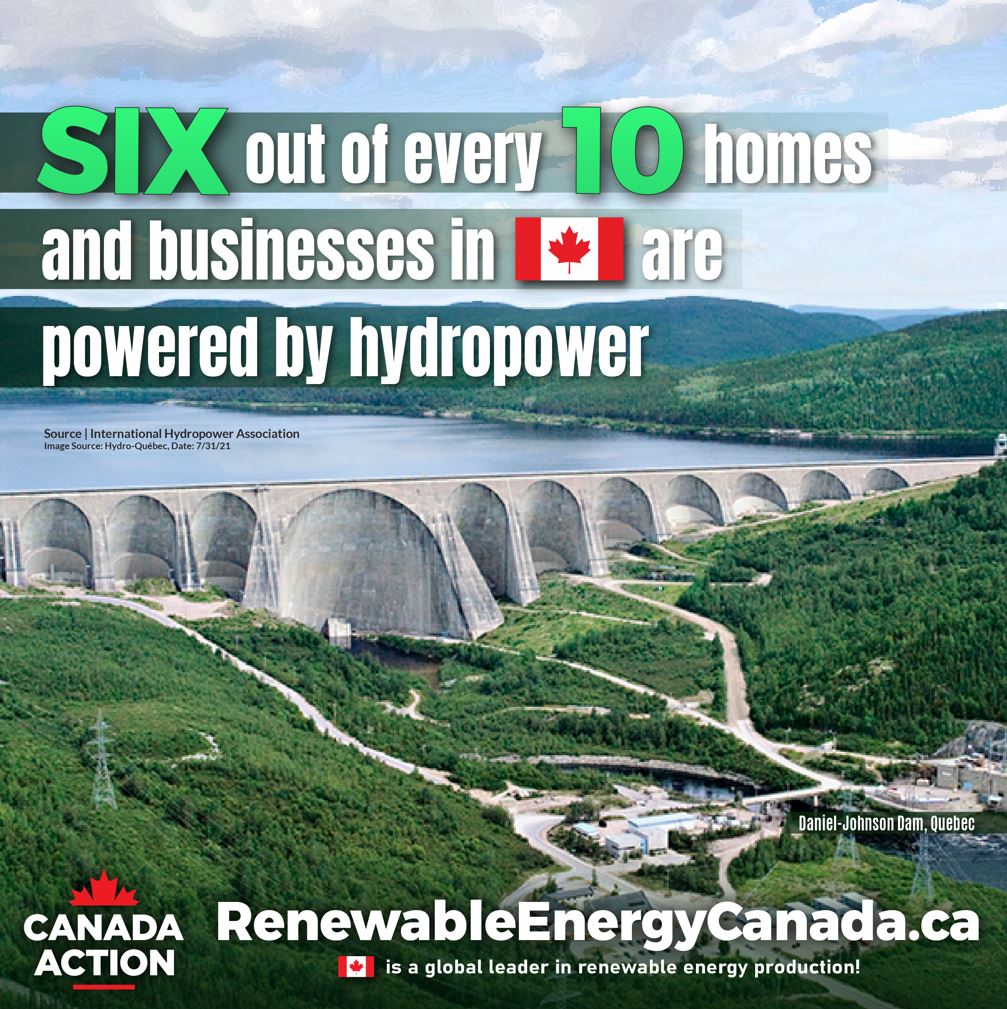 #56 - Quebec generates nearly 100 per cent of its electricity needs from renewable sources, with hydro accounting for the lion’s share of that generation (CER)

#58 - Quebec currently has 36.8 gigawatts (GW) of installed hydropower and is home to the 4th largest network of hydropower generating stations in the world (Hydro Quebec, Canadian Encyclopedia)

#62 - The wind industry in Quebec employs 5,000 full-time workers, whose average annual salary is 30 per cent higher than the Quebec average (CANWEA) 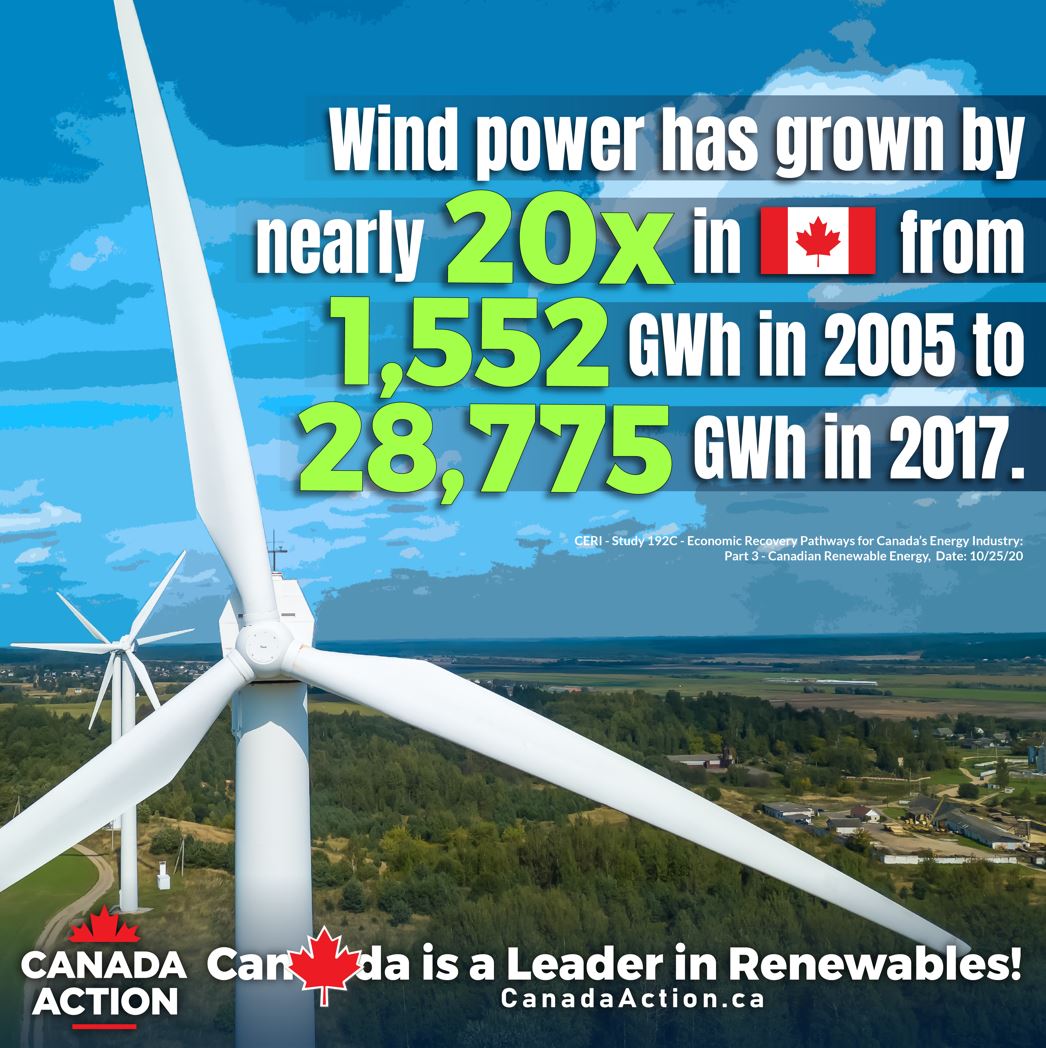 #63 - In 2015, Newfoundland & Labrador saw more than 95 per cent of electricity generation come from renewable sources (CER)

#64 - Newfoundland & Labrador currently has new major hydropower facilities underway like Muskrat Falls for example, which will add over 820 more MWs of generation to the province’s renewable capacity (CER)

#66 - By 2020, New Brunswick plans to meet 40 per cent of its total electricity demand with renewable sources (CER)

#68 - Nova Scotia has the second-largest share of provincial electricity supply from wind power across the country - at nearly 12 per cent.

#73 - The Yukon relies mainly on three hydro generating stations for its electricity supply, with four diesel generators as back up 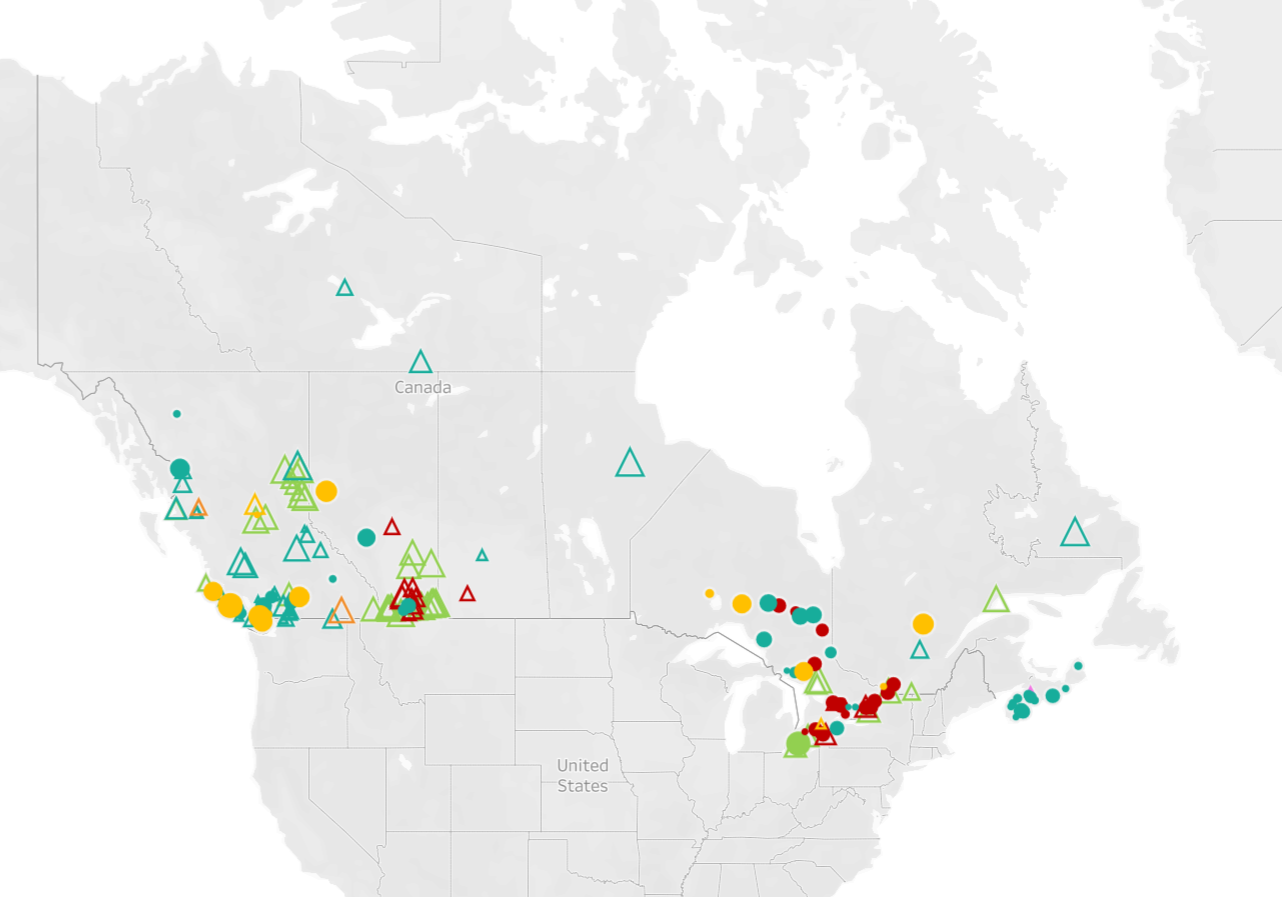 Canada currently has several renewable energy projects underway which will add thousands more megawatts to the electricity grid (map below shows new projects between 2019-2023). See a full list of renewable projects to come by 2023 here:

Canada is a Global Leader in Renewables

If the 75 facts on renewables in Canada didn't make you a believer in our global leadership on clean energy, then we don't know what will!

We invite you to join us online to learn more about Canada's world-class energy sector at Twitter, Instagram and Facebook today! See how you can take part in our growing movement to support Canada's natural resource sectors and the jobs and prosperity that come with. We hope to see you there!