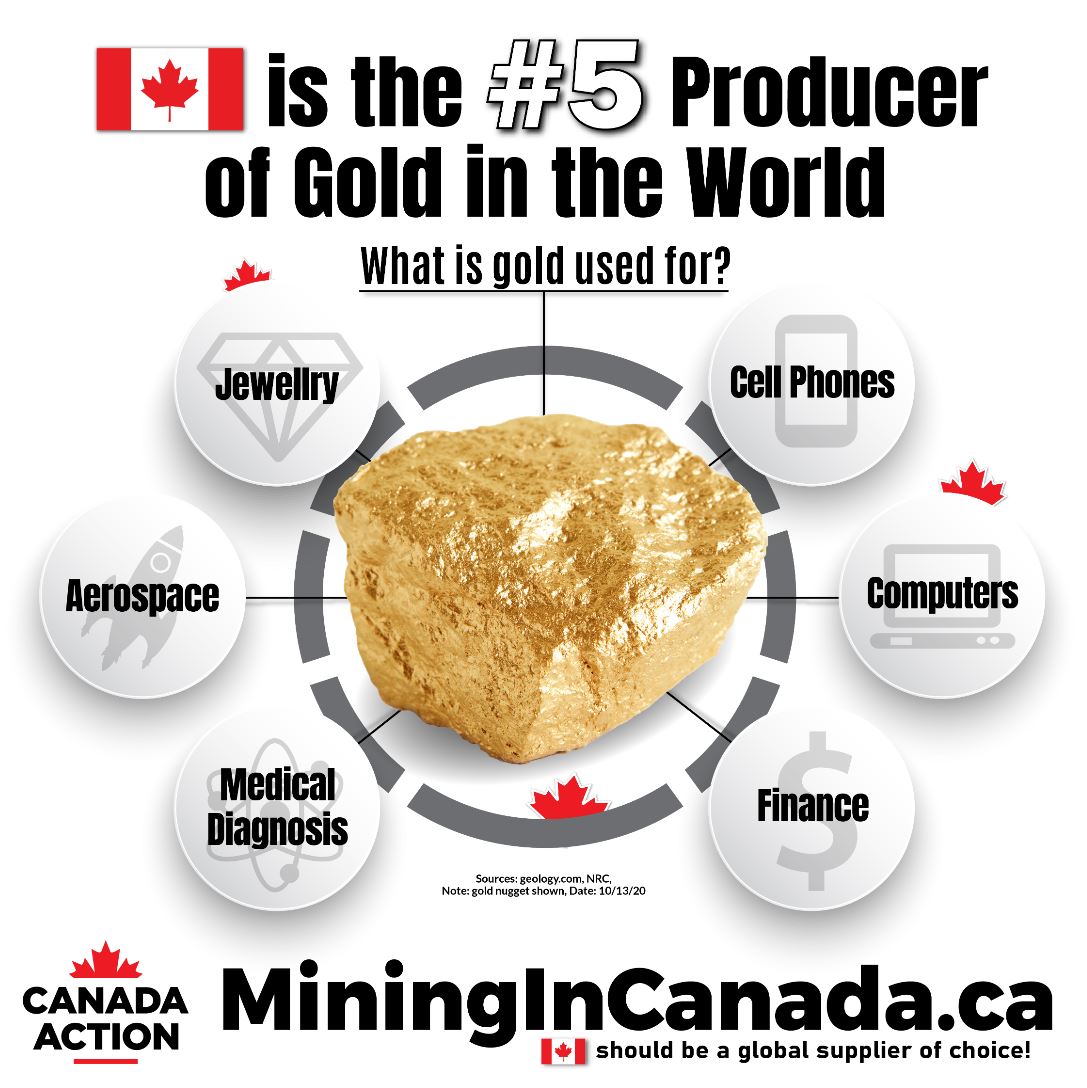 Did you know that Canada is home to the world's 9th largest gold reserves? Gold is mined in nine provinces and territories including out west in British Columbia, to the north in Nunavut, and in the east on the island of Newfoundland.

Gold was first discovered in Canada in the 1820s along the shores of the Rivière Chaudière in the Eastern Townships of Quebec. In 1858, gold discoveries in the sands of B.C.’s Fraser River started what was known as the Cariboo Gold Rush, similar to the famous rushes in Australia and California during the same decade. Another 40 years later, the discovery of gold in the Yukon, cause for the legendary Klondike Gold Rush, ushered in one of the most productive periods of gold mining in the history of Canada.

Today, Canada stands as the fifth-largest global producer of gold in the world, with new mines and exploration continuing in provinces and territories across the country. To paint a clear picture of gold mining in Canada in the past, present and future, we’ve compiled several facts for you below. 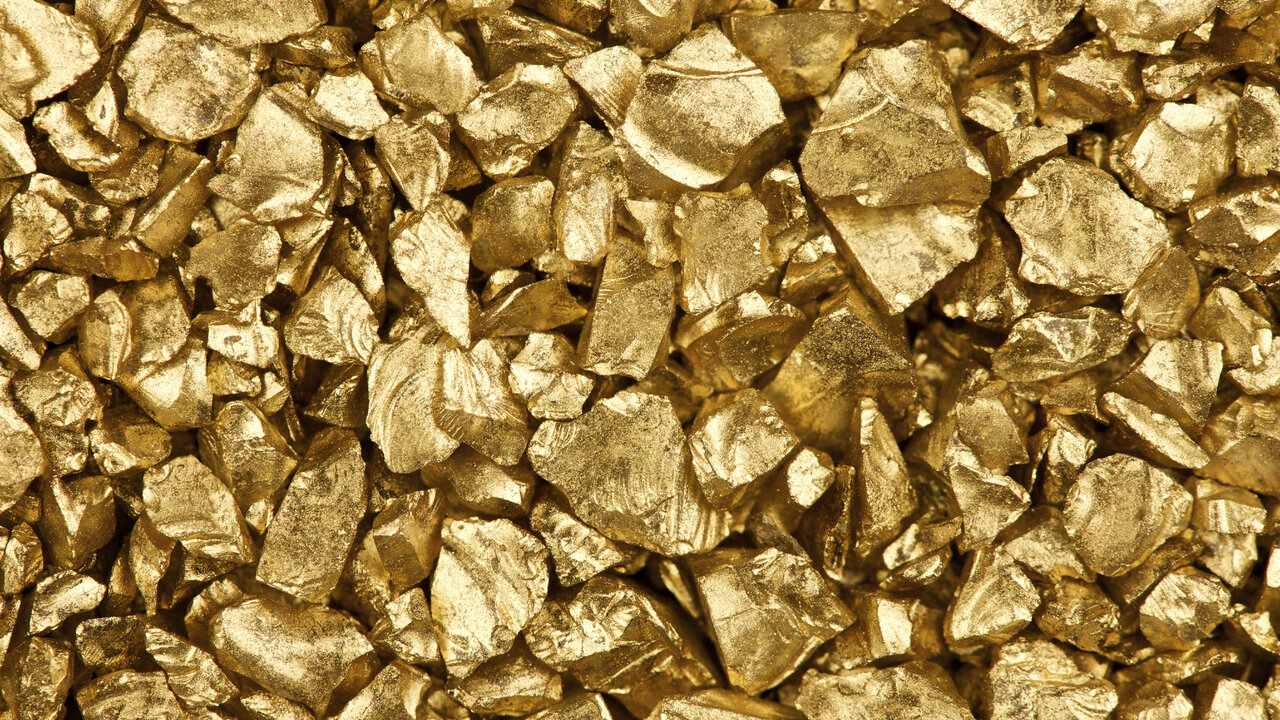 #6 - Canada accounted for 5.3 per cent of global gold production in 2019, ranking as the fifth-largest producer in the world

Where is Gold Found in Canada? 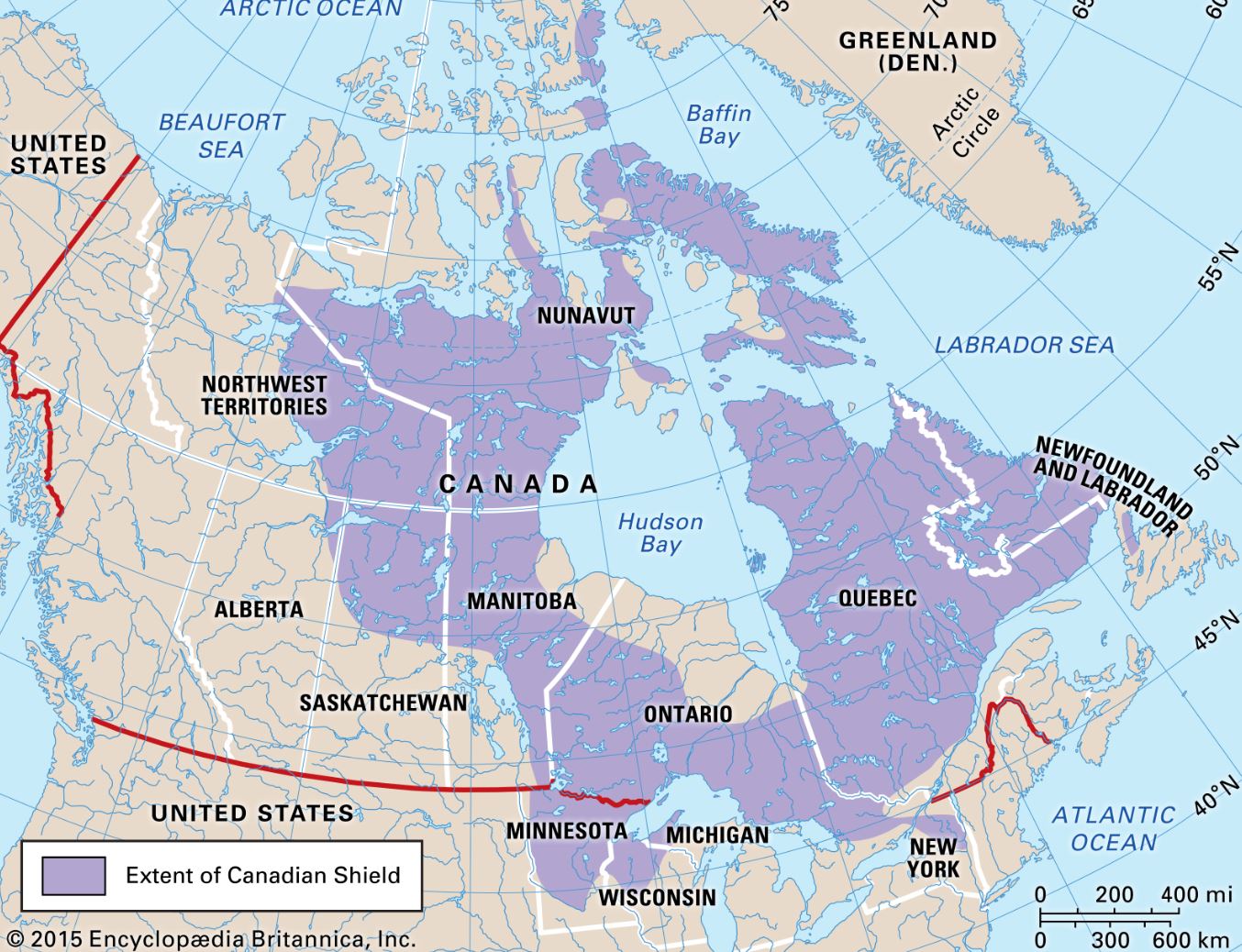 The Canadian Shield is home to a vast majority of Canada’s gold reserves. As the oldest and largest geological region in Canada – forming between 570 million to 4 billion years ago and encompassing more than 7.7 billion square kilometres of land – it is where you’ll find several operating gold mines including:

Canada’s gold reserves are found mostly in the eastern provinces of Ontario and Quebec, together accounting for more than 75 per cent of the Canada’s total gold production. Nunavut and British Columbia account for just over 16 per cent, while Saskatchewan, Manitoba, Nova Scotia, the Yukon, and Newfoundland and Labrador account for an additional 7 per cent of Canadian gold production. 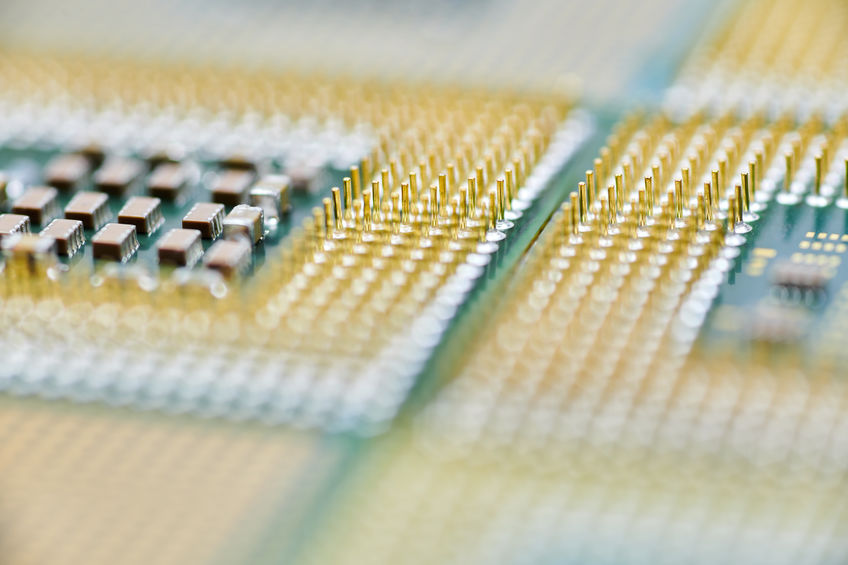 Gold has been used as currency, to make jewelry and in countless other applications for thousands of years. Today, roughly 50 per cent of global gold demand is accounted for by jewelry, while another 7.5 per cent is used in technological applications such as micro-circuitry. Another 29.2 per cent of demand is from investors who buy gold in the form of bars, coins, and wafers, while central banks account for nearly 15 per cent of demand for a variety of reasons.

Gold also has many medical applications as it can be used to treat rheumatoid arthritis, while ongoing research is looking into the role that gold nanoparticle technology can play in the treatment of cancer.

Other uses of gold include:

History of Gold in Canada 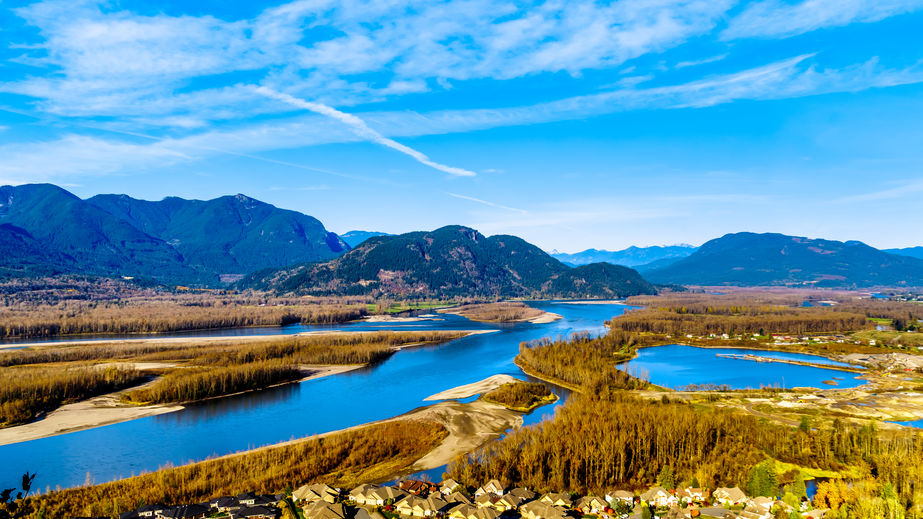 The first individuals to prospect and mine in Canada were Indigenous peoples who used minerals – including gold – for use in tools, weapons, art and other objects. Apart from use by Indigenous Peoples hundreds, if not thousands of years ago, here is a brief timeline of the history of gold in Canada:

1823 - Gold was first documented being discovered in Canada along the shores of the Rivière Chaudière in the Eastern Townships of Québec.

1897 – 1899 - The Klondike Gold Rush in the Yukon brought one of the most productive periods in Canadian gold mining history.

Early 1900s - The gold rush of Ontario moved across the provincial border into northern Québec as gold was discovered at Bourlamaque, Val d'Or, Chibougamau and Malartic.

1929 – 1941 - During the beginning of WWII, Canadian gold mining capacity was expanded to help pay for wartime expenses.

1981 - The discovery and development of the large Hemlo gold deposit in northern Ontario, followed by other discoveries and developments across Canada, resulted in increased production and importance of gold to the Canadian economy.

Today, Canada ranks as the fifth largest producer of gold in the world with 5.3 per cent of global production and enjoys a world-leading record for overall Environmental, Social and Governance (ESG) performance. 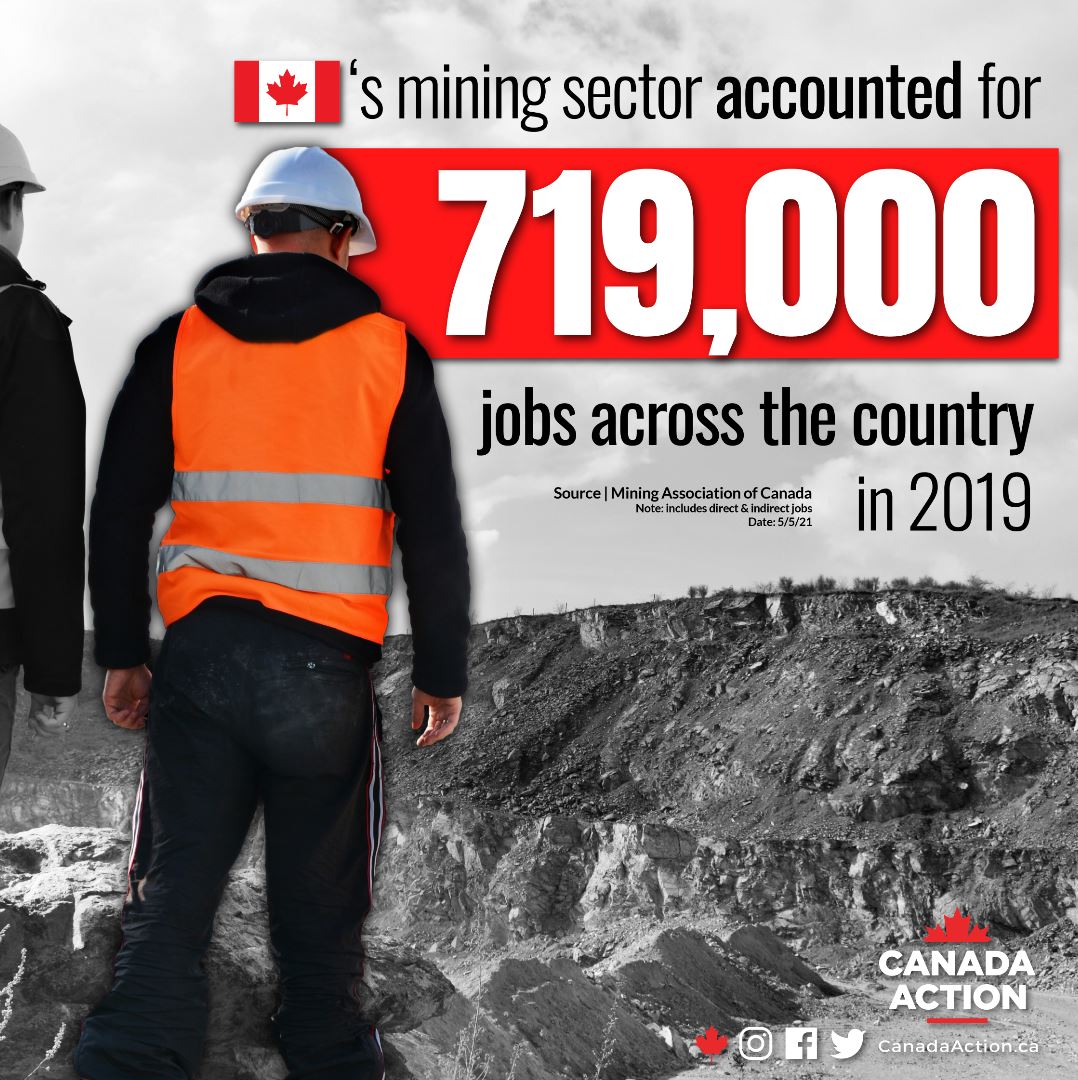 The Mining Association of Canada (MAC) is continually working on improving methods of extraction and production to decrease the environmental footprint of the industry. MAC’s Towards Sustainable Mining (TSM) standard – introduced in 2004 – is a great example of the sector’s social and environmental conscience.

TSM is a globally recognized sustainability program that supports not only Canadian mining companies, but also those abroad in managing key social and environmental risks. Today, other nations such as Finland, Spain, Norway, Argentina, Australia, Brazil and the Philippines have all adopted Canada’s TSM program as the standard in pursuit of more sustainable and environmentally conscious mining.

The Made-In-Canada initiative has brought global recognition to our mining industry as one of the most sustainable in the world. Canadian companies continue to voluntarily apply sustainable mining practices outlined under the TSM in operations around the world – even when they don’t have to – which shows just how world-class our mining sector really is!

Mining in Canada is an integral part of our economy and supports hundreds of thousands of families across our nation. We must continue to take the necessary steps to cement Canada’s status as a global mining leader and to ensure that the industry continues to create prosperity for all Canadians.

We invite you to join us and hundreds of thousands of fellow Canadians on Twitter, Instagram and Facebook to learn more about the positive influence resources have in our lives and how we should be a global supplier of choice for oil, natural gas, minerals, metals, forest products, agricultural products, and everything in between. We hope to see you there! 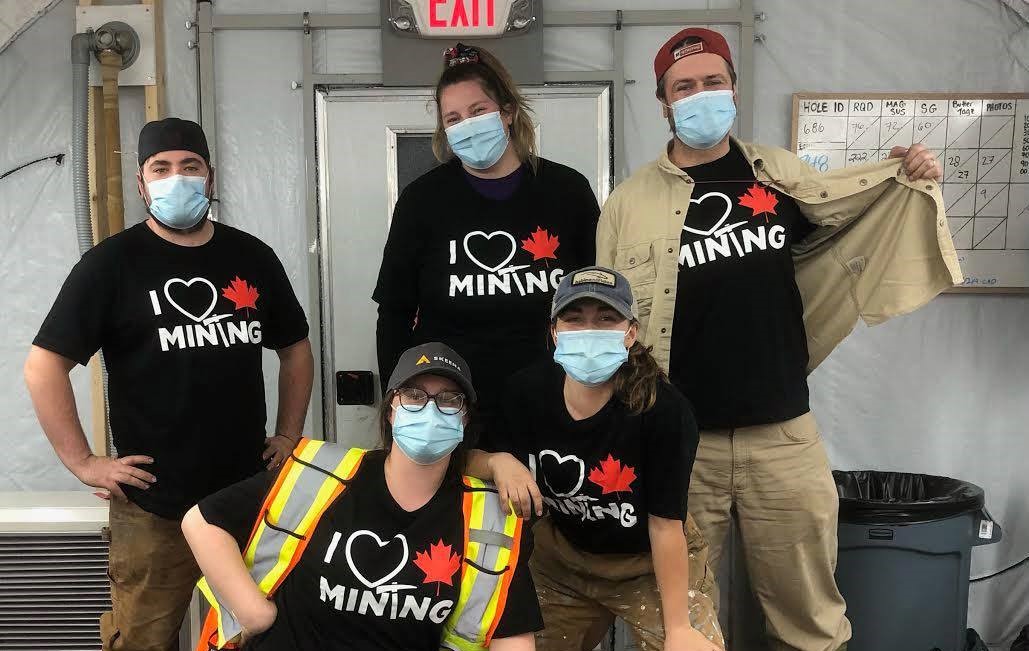 Canada is Setting the Global Standard for Sustainable Mining

Key Points • Made-in-Canada initiatives are bringing global recognition to our mining industry as one of the most sustainable in the world • Canadian companies are voluntarily applying sustainable practices required at home in operations around the globe • Canada's world-class...