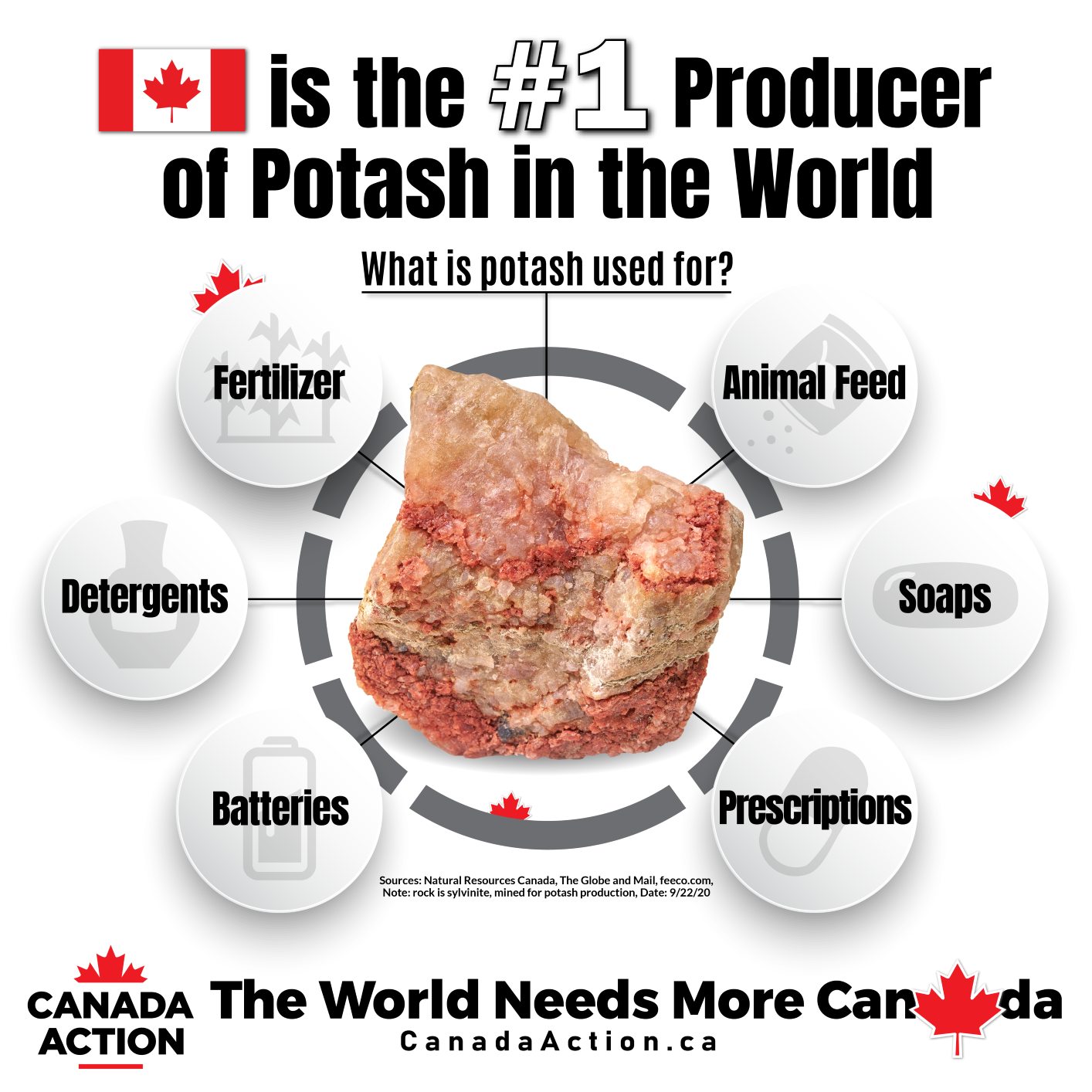 Did you know that Canada is the largest producer and exporter of potash in the world?! Canada also is home to the largest global potash reserves, with over 1 billion tonnes - or about 20 per cent of the world’s supply!

Potash is a common name for an alkaline potassium compound made up of a group of minerals and chemicals containing potassium (K on the periodic table). Potash is typically produced to make potassium chloride (KCl), about 95 per cent of which is used in fertilizers that help plants grow by improving overall health, root strength, disease resistance, water retention, and yield rates as an end result.

Where is Potash Found in Canada? 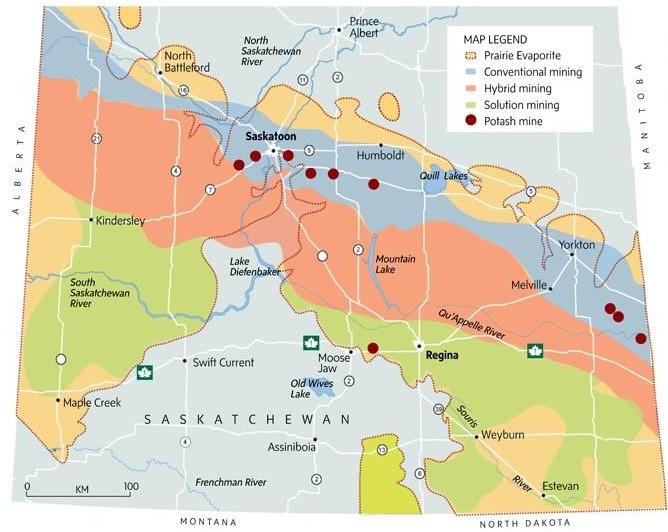 Canada’s underground potash deposits formed some 400 million years ago as an ancient inland sea evaporated, leaving behind layers of common salts that trapped precious minerals in the seafloor. These deposits are part of the Western Canadian Sedimentary Basin which is where you’ll also find the oil sands and several other vast reserves of different natural resources in Canada.

Saskatchewan is home to the vast majority of potash in Canada. Saskatchewan’s deposits are found near Alberta to the west of Saskatoon and span to the southeast corner of the province in three major layers called the Esterhazy, Belle Plaine and Patience Lake Member. Each of these layers are known for their high-grade potash and are separated by layers of salt.

New Brunswick has one potash mine, but it is much smaller in scale than those in the west.

Saskatchewan’s northern deposits are located about 1,000 metres below surface and are extracted using conventional mining techniques. To the south, deposits are anywhere from 1,500 to 2,400 metres deep and are mined using solution techniques.

These northern and southern deposits are separated by a “hybrid” deposit of potash which is currently uneconomical to produce using contemporary mining techniques. New technologies are required to allow the extraction and production of this “hybrid” layer.

History of Potash in Canada 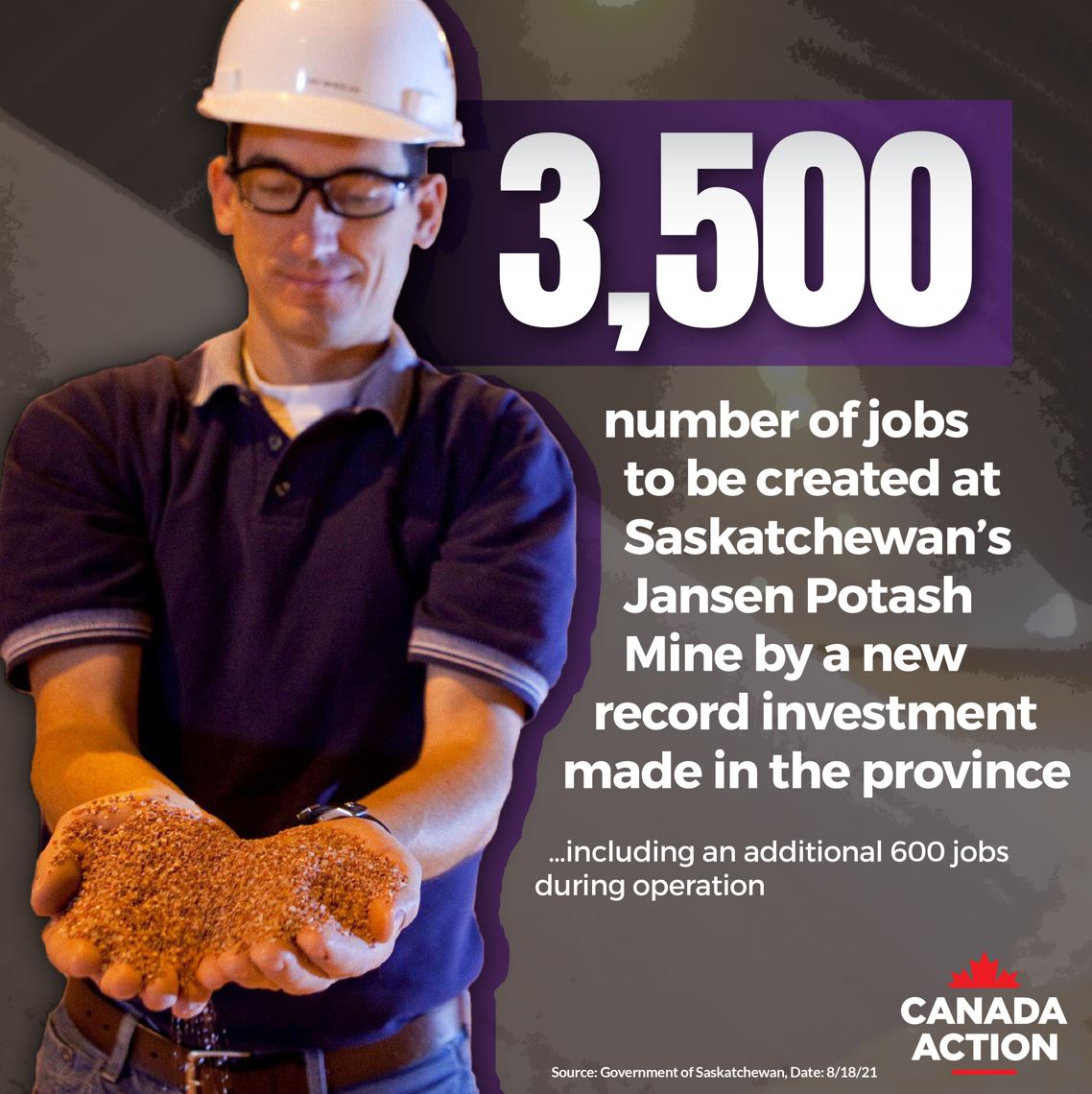 1943 – During the 1940s, exploratory drilling for crude oil led to the discovery of potash in Saskatchewan

1951 – By the early 1950s, active exploration for the mineral commenced

1964 – The world’s first solution mine is opened near Regina by Kalium Chemicals Ltd, with a depth of nearly 1,600 metres

1960-1985 – Potash mine development in Canada occurs mostly in Saskatchewan

Today, Canada is the world’s largest producer and exporter of potash and exports more than 95 per cent of production to over 50 countries. The United States, Brazil, Indonesia, India and China are Canada’s top buyers.

What is Potash Used For? 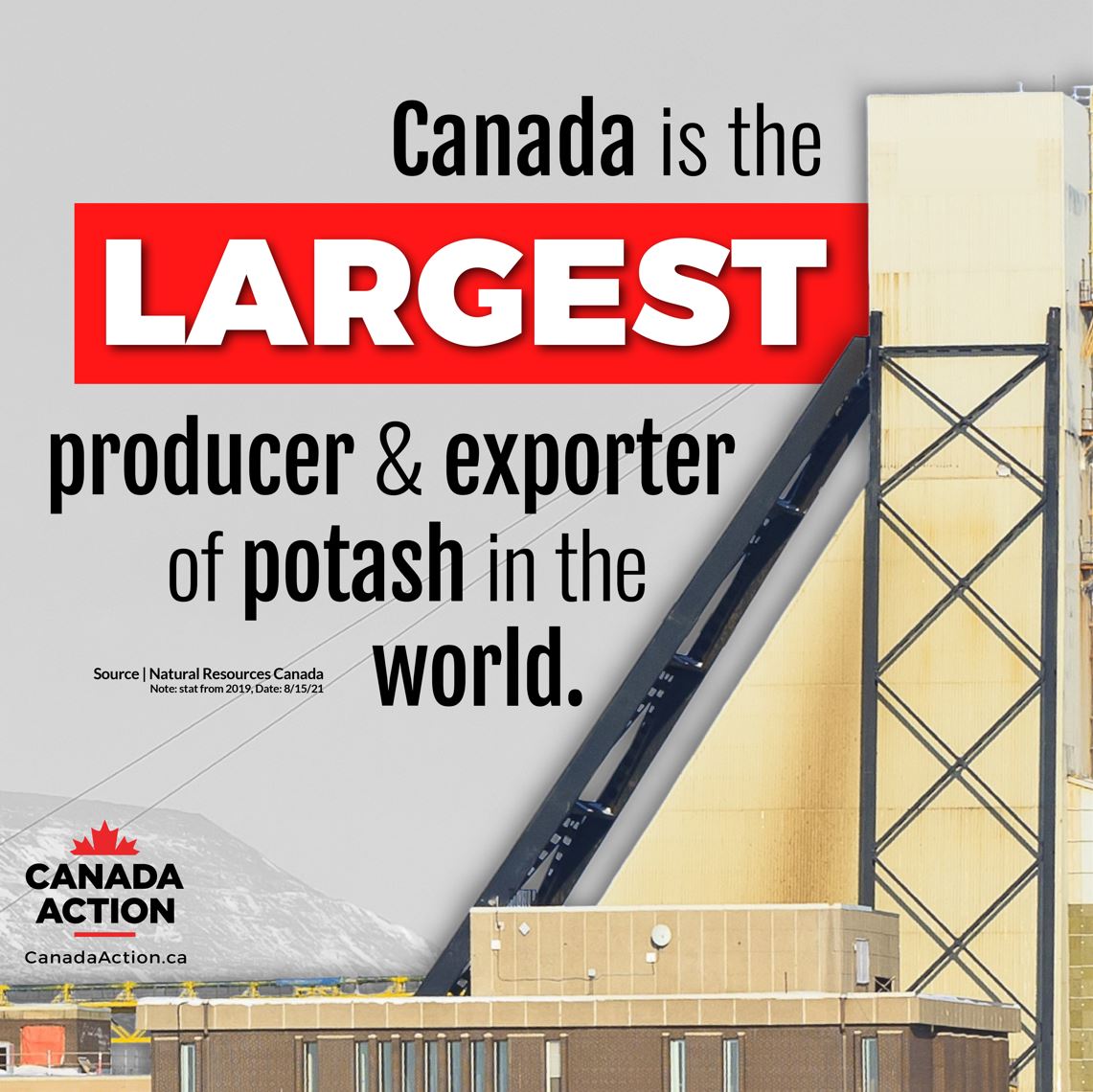 Most (95 per cent) of potash is used for fertilizer. The rest is used in various products including, but not limited to:

Fertilizer has been called one of the greatest inventions of the 20th century, and without it about half of the world's current population would not be alive! 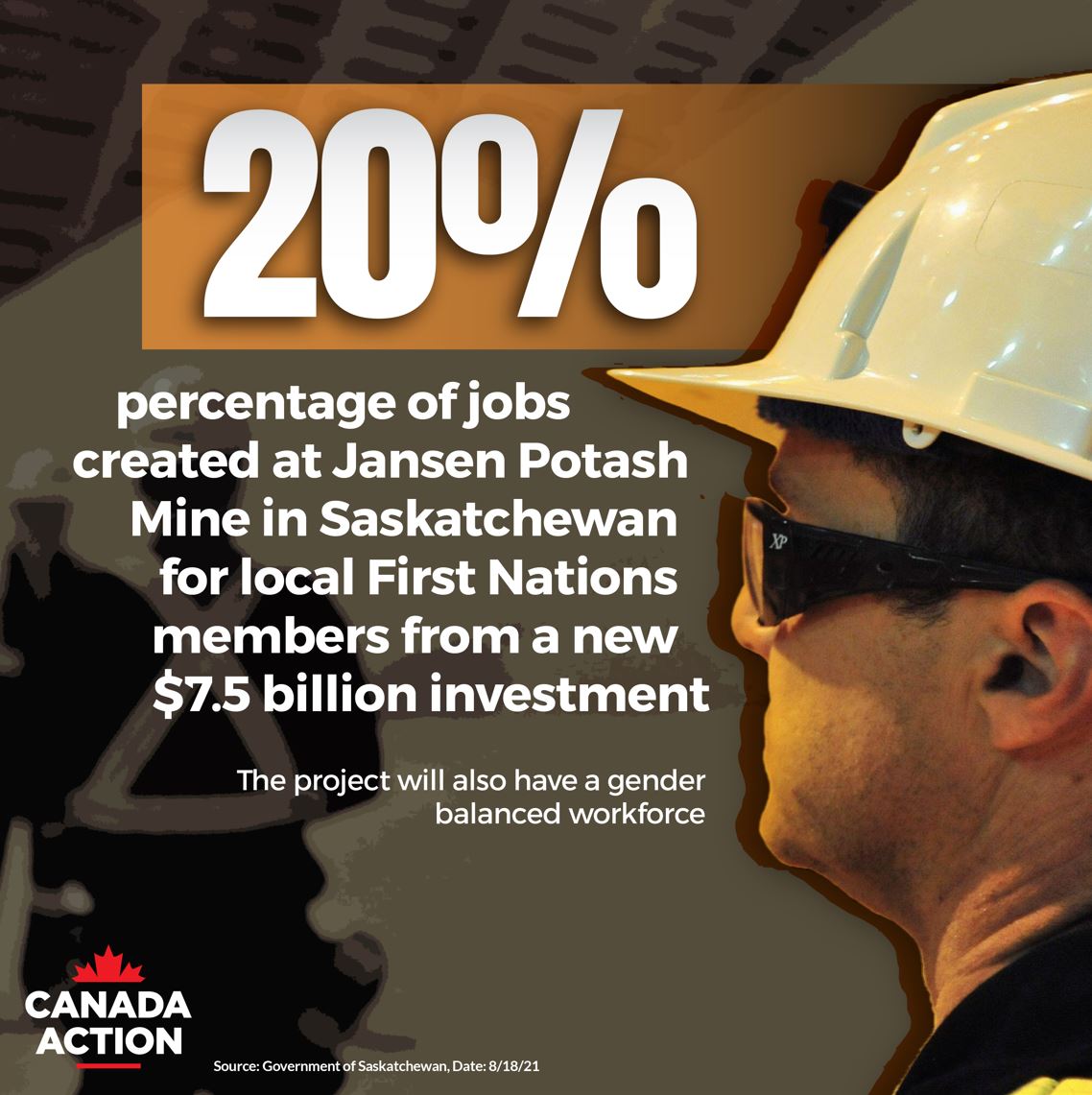 Canada's mining sector is world-class when it comes to upholding transparency, following regulations and protecting the environment. We should be proud of our sustainably produced natural resources!

We invite you to join us and hundreds of thousands of fellow Canadians on Twitter, Instagram and Facebook to learn more about the positive influence resources have on our daily lives and how we should be a global supplier of choice for oil, natural gas, minerals, metals, forest products, agricultural products, and everything in between. We hope to see you there!

Back to Mining - Canada Action 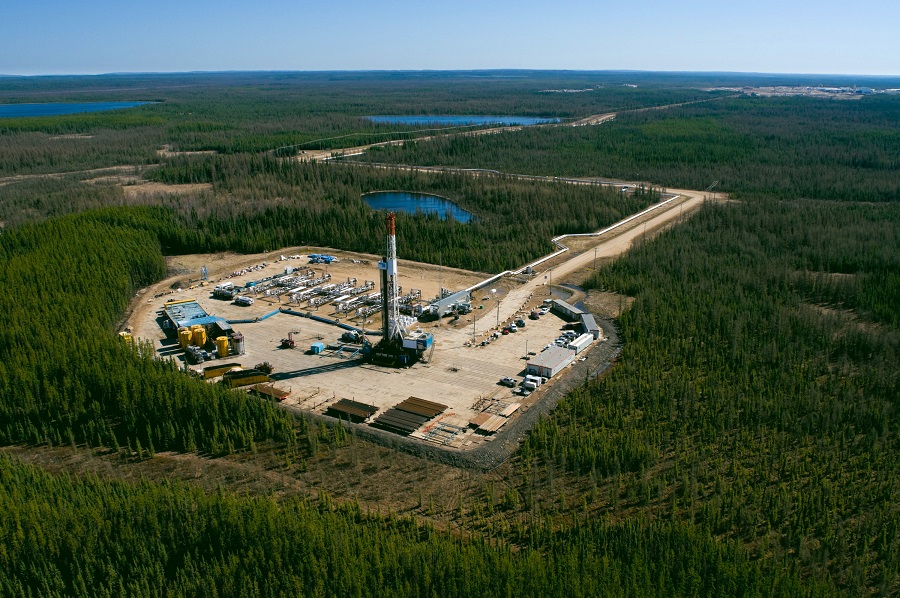