• Is the oil industry really “dead” as some are saying? Explores the suggestion by Canadian political leaders Elizabeth May and Yves-François Blanchet earlier last week.

• Several facts from pre, during and post coronavirus that point towards continued growth in global demand for oil for decades to come.

• Shutting down Canada's oil industry would only cede market share to producers who are less environmentally friendly while having no effect on global emissions, also impairing Canada's ability to transition to a lower carbon economy in the future. 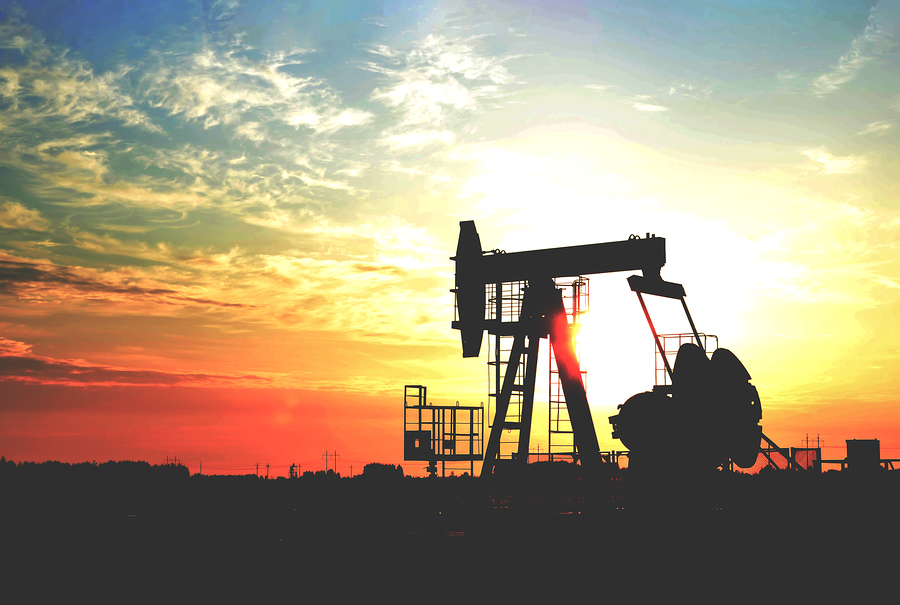 Canada’s energy sector is currently facing adversity like it never has before due to:

• The onset of the coronavirus pandemic, reducing global demand for crude oil and natural gas.

• And just recently, two political party leaders of Canada forcing oil and gas workers across the country to stand up to yet a third front.

In a press conference last week, former Green Party leader Elizabeth May stated that “oil is dead,” while the current Bloc Quebecois separatist leader Yves-François Blanchet agreed with her statement suggesting that the “…tar sands are condemned.”

They both warned Ottawa about providing further assistance for the oil and gas sector while putting their support behind investing in renewables, energy efficiency and green initiatives that, in their opinion would do much better to kickstart the economy post COVID-19.

Trudeau, Hyder: Oil is Not Dead 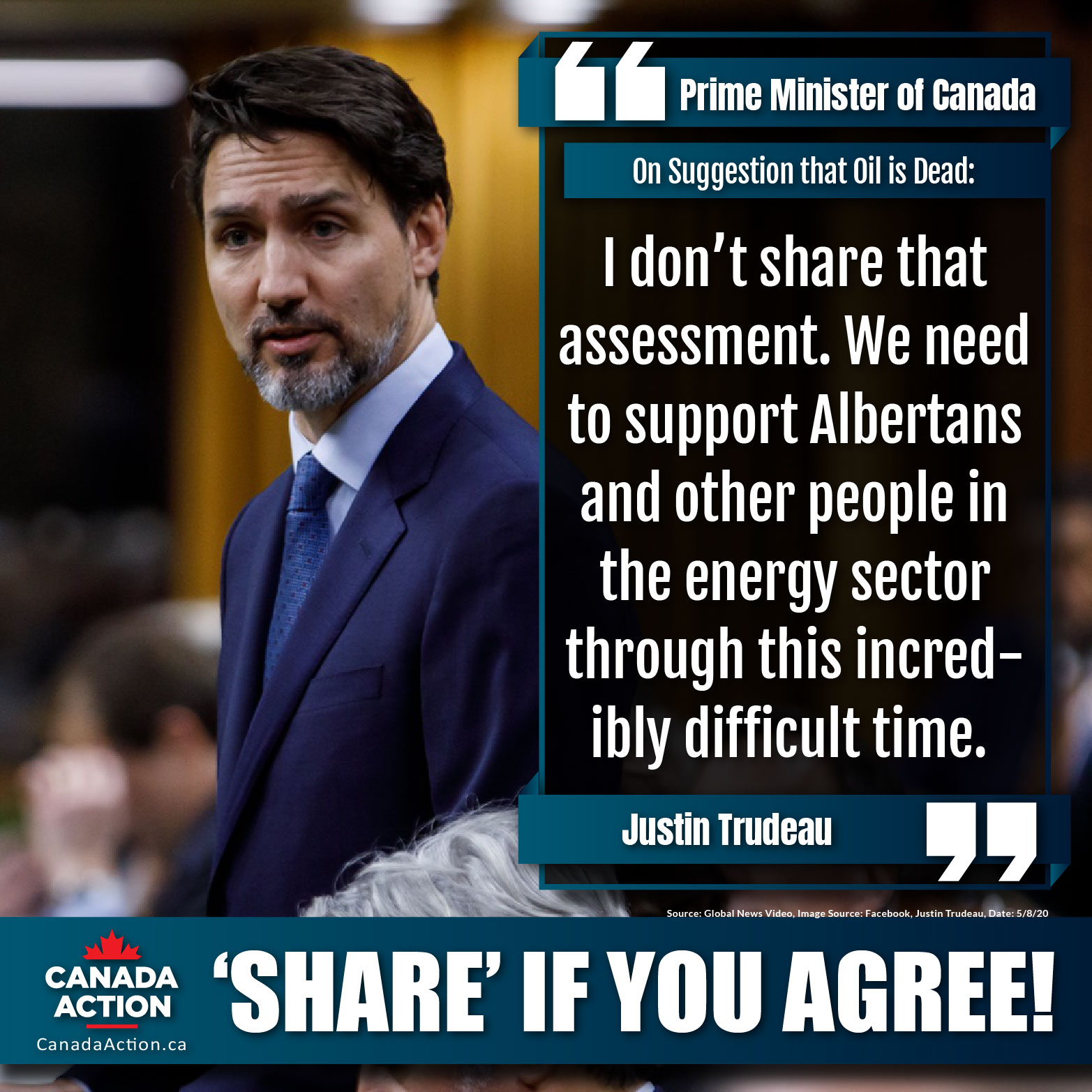 When asked about the statements made by May and Blanchet during his daily pandemic brief to Canadians, Prime Minister Justin Trudeau pointed out that Canada will need a healthy oil and gas sector and rely on the ingenuity and innovation of its workers for the economy to get back on its feet.

“I don’t share that assessment,” the PM said. “I know that if we are to move forward in transforming our economy towards lower emissions and cleaner processes, workers and innovators in Alberta and across the energy sector are going to be an essential part of that transformation.”

Goldy Hyder, President of the Business Council of Canada, also didn’t share any sentiment with May or Blanchet, stating that revenues from the energy sector are necessary to supplement the transition to a lower carbon economy.

“Don’t suffocate the very capital that leads to the very innovation that addresses climate change,” said Hyder, echoing what he said in his interview with Financial Post's Strong & Free: Shockproofing Canada series a few weeks ago where he pointed out that Canada is a “natural resource nation” with an economy that relies on energy of many forms.

“We need to smarten up in a hurry.”

Canada’s energy sector is a national strength and we need to support our resource sector wholeheartedly to get our economy back on track. #CdnPoli pic.twitter.com/H7u7Y9ocb7

“I think we need to have, yet again, a responsible, mature conversation about the role of energy in Canada and our ability to leverage it as a resource to grow the economic wealth and prosperity of our people and support our social programs,” he said.

Hyder went on to explain that Canada has many different forms of energy at our disposal – oil, natural gas, nuclear, hydro, wind, solar – that can help prop up our economy post COVID-19.

Trudeau and Hyder’s comments show a realistic approach to the prospects of a dead oil industry both across the world and here at home in Canada.

Their stance is supported by several facts regarding what’s happened in the past, present and future, and the dramatic changes that will have to take place for the oil industry to truly be as “dead” as May and Blanchet suggested.

Is Oil Dead? The Past: 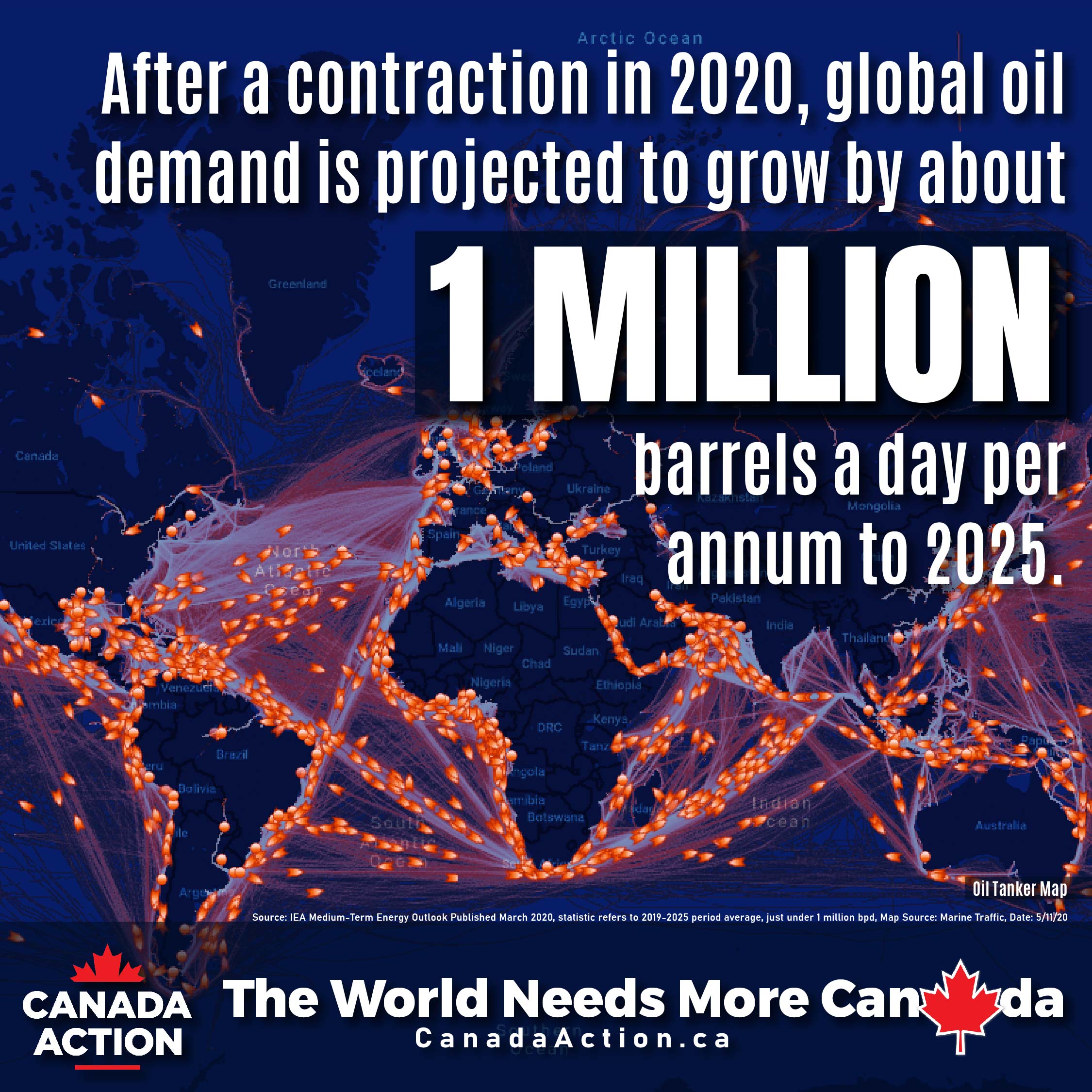 #1 - In previous economic recessions, oil demand dropped first, then it continued to grow and increase substantially afterwards. Since the 70s, temporary declines in global oil demand were followed by a return to even higher consumption than before (EIA).

#2 – Economic sanctions put on Venezuela by the U.S. in 2019 did nothing to curb global oil demand. All it did was cede market share to another producer, which in this case was largely Canada (Reuters).

If our oil and gas industry continues to shut in more and more production, we may potentially cede market share to other global producers over the long-term as demand grows again.

#3 – Economic sanctions put on Iran by the U.S. in 2018 also ceded market share to other producers such as Saudi Arabia, Iraq and the United Arab Emirates (UAE) in 2018, all the while failing to keep one barrel of oil in the ground (oilprice.com).

Is Oil Dead? The Present: 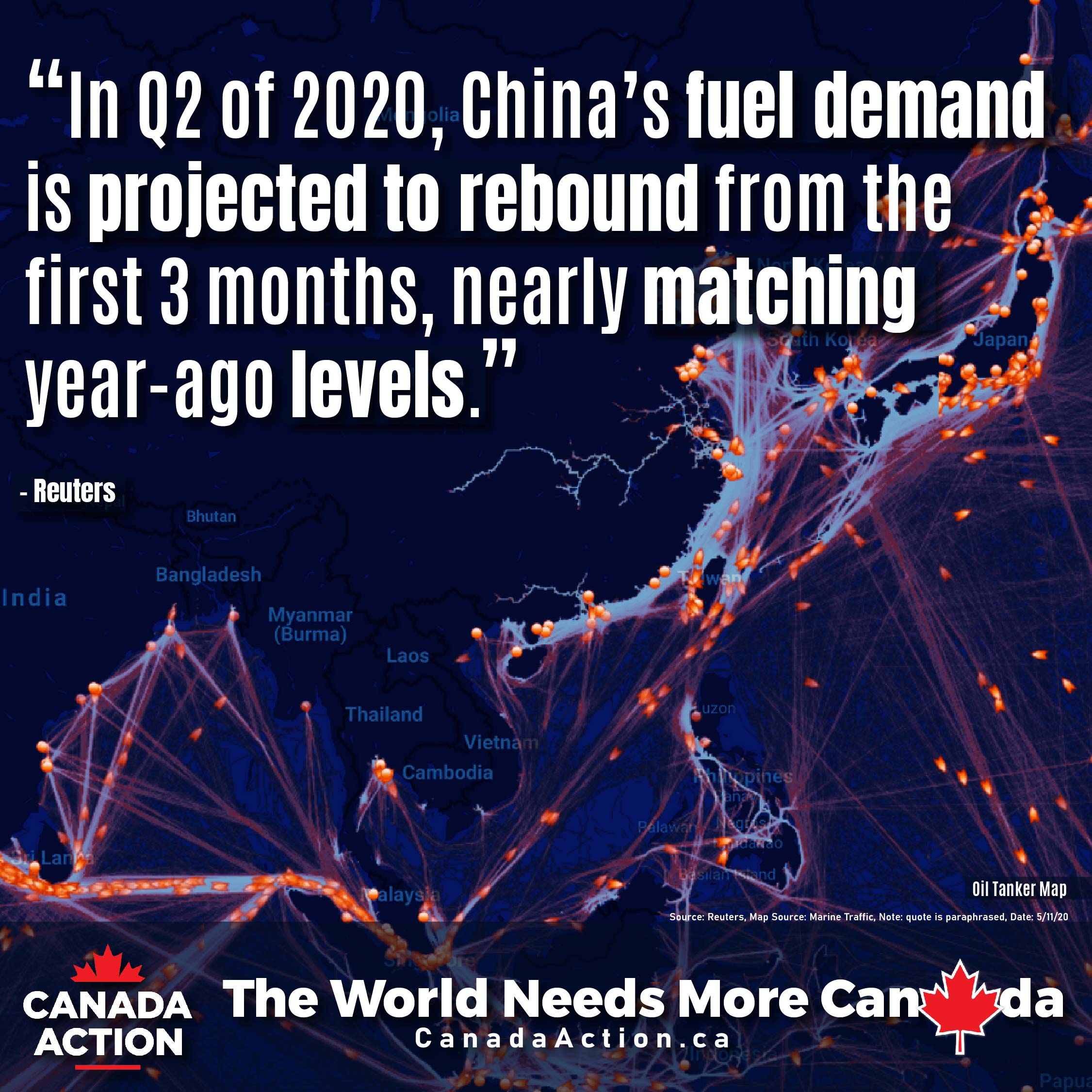 #4 - Neither the widespread acceptance of electric vehicles or maturity of renewable energy is currently causing the drop in oil demand. Roughly a third of the world’s population, many of whom live in developed nations with secure access to affordable and reliable energy, were in some form of lockdown during the coronavirus pandemic.

Opponents of fossil fuels would do well to remember that current oil prices are not the result of a non-emitting energy system displacing demand (Canadian Chamber of Commerce).

#5 - Today, nearly every product consumers buy or service people use involves fossil fuels somewhere in how it is made or delivered.

A complete restructuring of the global economy will need to take place by 2070 to reach the goal of a society with net-zero emissions, and even then fossil fuels will still account for nearly a quarter of total energy demand. Such a scenario is a technically possible, but poses many tough challenges (Shell Sky Scenario).

#6 - Oil demand is already returning to certain parts of the world where pandemic restrictions are starting to ease. In China for example, analysts estimate that fuel demand in the second quarter of 2020 will rebound from the first three months, nearly matching levels year-over-year.

#7 - India, the world’s third largest oil importer and consumer, could see fuel demand growth return to normal by mid-May of 2020.

#8 - Renewable production on scale currently cannot exist without fossil fuels. For example, to manufacture a 5-megawatt (MW) turbine you need roughly 900 metric tons of steel. To manufacture that steel at an economically feasible scale, you need massive amounts of energy which would come from fossil fuels.

By 2030, if the world decided it wanted to supply 25% of global electricity demand with 5-MW wind power turbines using a high capacity factor, it would require 450 million tons of steel. That figure does not include the metal used in wires, towers and transformers required to connect them to the grid.

Is Oil Dead? The Future: 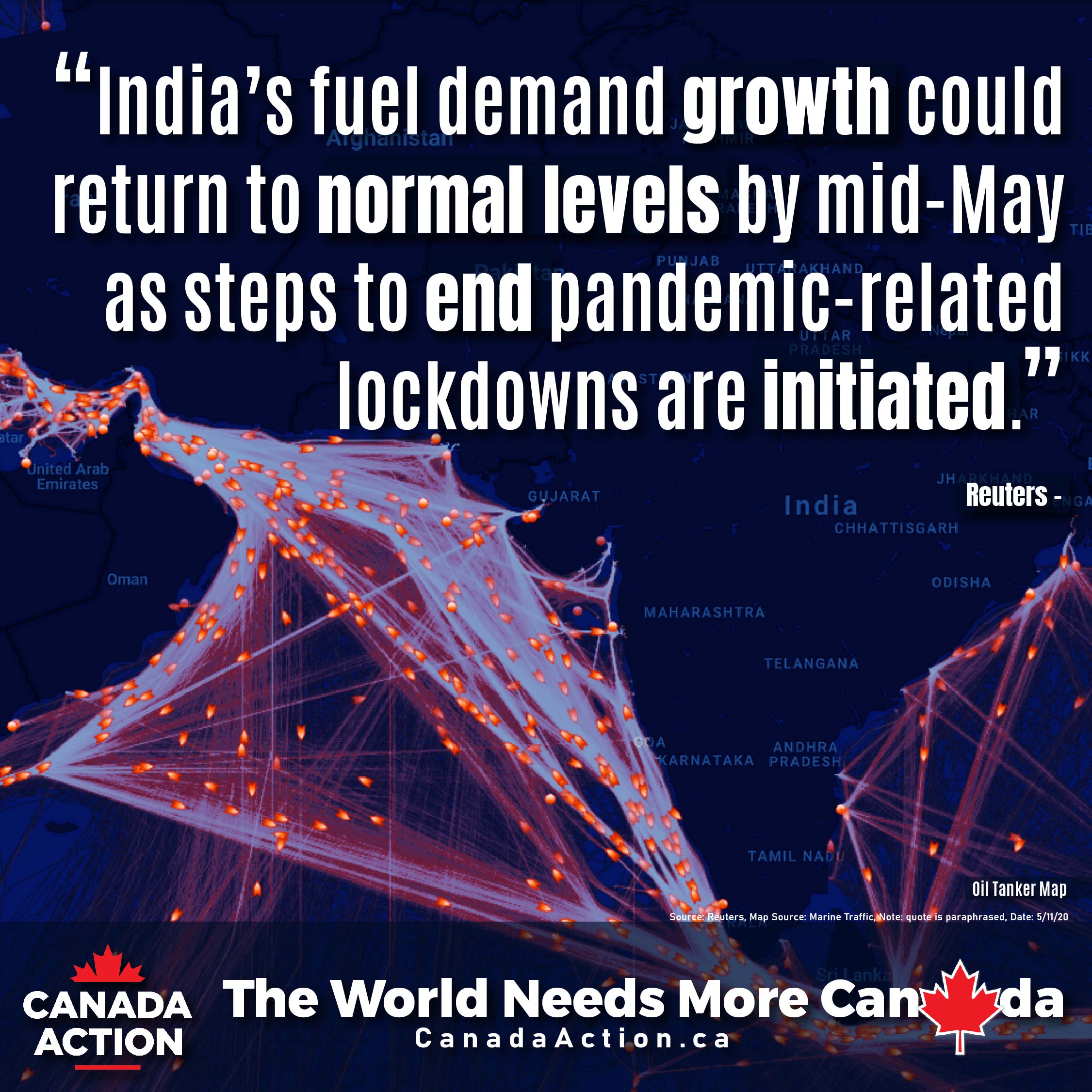 Prior to the COVID-19 pandemic, the International Energy Agency forecasted global demand for oil would continue to grow for another 20 years, up by 9% versus 2019 and peaking at 106.4 million barrels a day in 2040 (IEA).

#10 - In 2021, global demand for oil is expected to make a sharp rebound. Between 2019 and 2025, it is projected to grow at an average annual rate of just below 1 million barrels per day with India and China accounting for about half of that growth (IEA).

#11 - The world’s population is expected to grow by 1.7 billion by 2040, increasing global energy demand by 24%. We would need to produce twice as much energy as we do today by 2040 if it weren’t for continuous improvements in energy efficiency. Renewable technology must improve dramatically to be able to supplement this increase in demand (IEA).

#12 - Released in April 2020, The U.S. Energy Information Administration’s Short Term Energy Outlook projected global petroleum and liquid fuels demand to decrease by 5.2 million b/d in 2020 from an average of 100.7 million b/d last year before increasing by 6.4 million b/d in 2021 (EIA).

#13 - The amount of global oil demand lost from electric vehicles is just a drop in the bucket compared to the growing demand in the developing world. If all vehicles are electric by 2040, global oil demand has been projected to be equal to 2013 levels at 93 million barrels per day (Imperial)

Canada Should Be the Last Producer “Out of the Pool”

Peak oil is another concept that May and Blanchet would do well to understand. While the exact timing of peak oil is up for debate (projected before the pandemic by various orgs anywhere from early 2020s to mid 2030s and beyond), demand does not immediately diminish to zero once we reach that climax.

The most rigorous (and recent) sustainable development policies project that by 2040, oil demand will be roughly 70 million barrels per day. Governments worldwide will have to make drastic policy changes – including China and India – if these levels of consumption are to be reached. 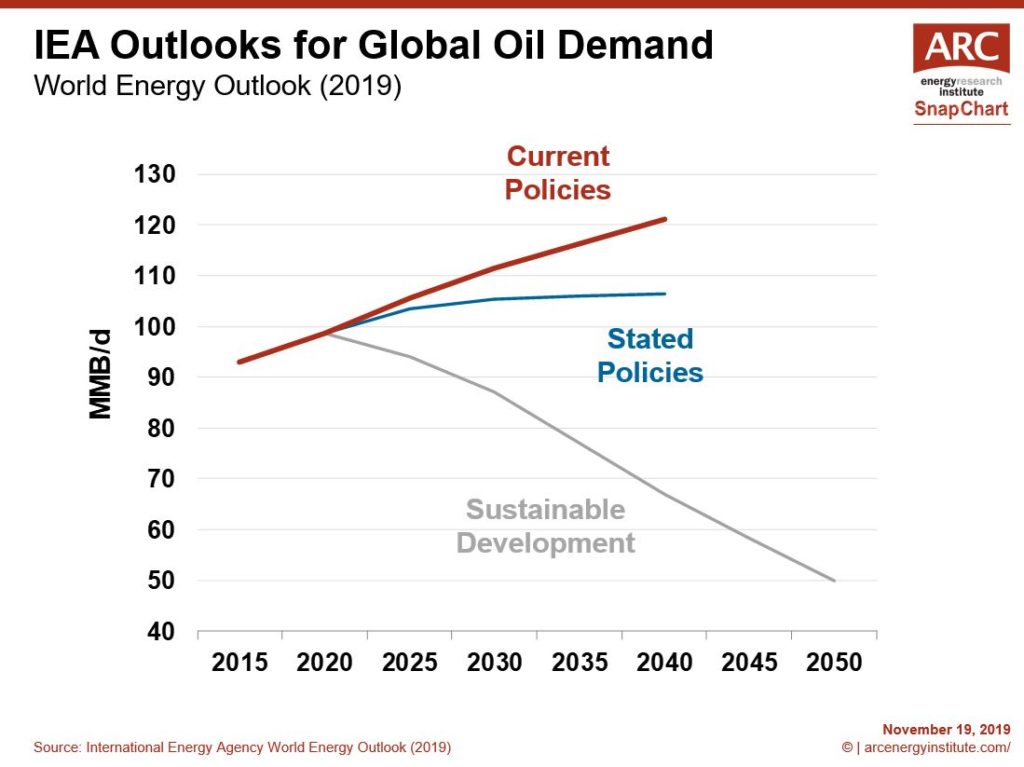 Just exactly how the coronavirus pandemic will affect these projections is yet to be seen in a new long-term forecast by any major organization.

But one thing is for sure. Canada’s exemplary environmental, social and governance (ESG) record among the world’s top 10 oil exporters make it the ideal producer to source oil from.

As long as the world needs this product – even if its down to 70 million barrels a day in two-decades’ time - it should come from Canada, one of the world’s most transparent, regulated and environmentally conscious producers!

We are Leaders in Renewable Energy

We should all agree with May and Blanchet when it comes to continued investment in renewables, energy efficiency and a low carbon economy. Judging from facts from the past, present and future, however, we should all also be more realistic about when and how that energy transition will come and if and when oil really is going to be “dead.”

This isn’t an “either, or” conversation, but one in which we should recognize that both our oil and gas and renewable sectors can prosper at the same time for the benefit of all Canadians.

Shutting down the oil and gas industry, a major economic engine of Canada and the largest investor in environmental protection and clean technology in the country, will do nothing to reduce emissions.

It will however cede market share to other producers and starve the public and private sectors from revenues needed to continue transitioning towards a lower carbon economy, the latter of which Goldy Hyder has previously discussed. 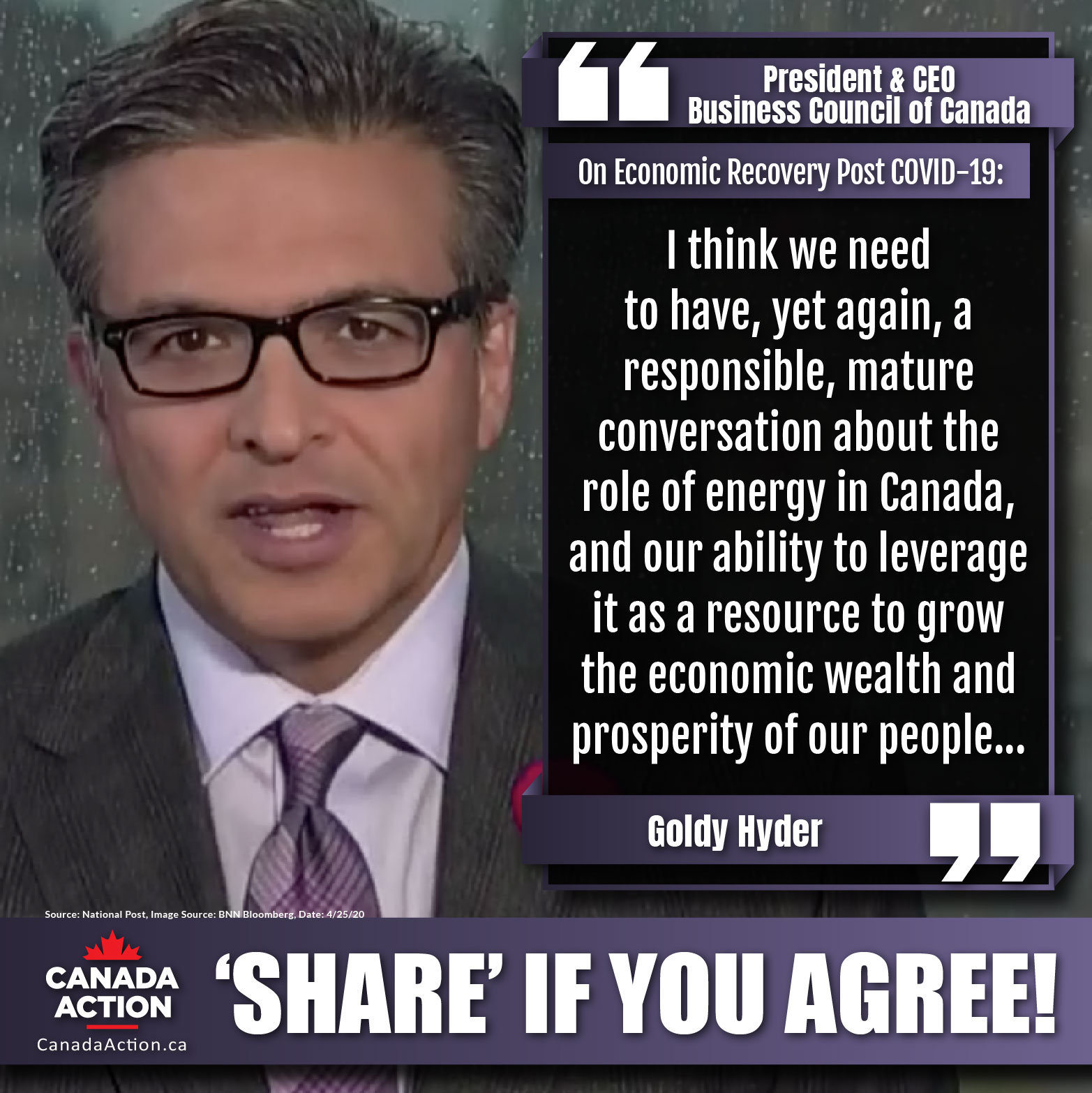 Today, Canada gets 81% of its electricity production from non-emitting sources and is a leader among the OECD for total energy demand from renewables. We should be proud of our renewables, but also proud of our oil and gas industry’s leadership in environmental, social and governance factors among the world’s top oil producers and give it the support it needs to get through the tough times ahead.

The oil and gas sector has generated roughly $360 billion in revenue for Canadian governments since the turn of the century, used to pay for schools, roads, healthcare and all the public sector jobs we rely on for these services. It is nothing less than ridiculous to suggest that we should abandon one of our most important sectors that has done so much for our country on the false predication that “oil is dead.”

• How Much Oil Does Canada Import? Too Much!

• Is Oil Important to Canada's Economy?

• Global Oil Demand is Growing, Canada Should Be a Choice Supplier