It’s no secret that Canada’s energy sector has been struggling in 2019. It’s unfortunate that this year so far has been but a continuation of many before it where the oil and gas industry has seen capital investment and investor confidence drop significantly.

Meanwhile, countless layoffs have forced talented individuals to move to other more competitive jurisdictions for jobs and better employment opportunities, many of whom are relocating south to the United States.

This “brain drain” of skilled workers is not all, either. One of our homegrown oil and gas companies, Encana, just announced it’s relocating its main offices to the United States as it looks for better opportunities in a flourishing national energy sector to attract investment.

Oh, and don’t mind the name change to Ovintiv, because let’s get rid of the ‘cana’ in Encana too. This move follows former TransCanada earlier in 2019 to eliminate any resemblance of ‘Canada’ from its name, changing to TC Energy.

If there’s any indication of the state of the investment climate in Canada’s oil and gas sector, this is it. Two Canadian companies who don’t want to be identified as Canadian any longer. Four of five of Canada’s major bank CEOs have taken notice, and expressed serious concerns.

Once a company relocates its headquarters, any investor or business mind knows that increased investment and capital spending in that jurisdiction will likely follow.

Victor Dodig, the President and Chief Executive Officer (CEO) of the Canadian Imperial Bank of Commerce (CIBC), our country’s fifth largest bank, undoubtedly knows this and so much more related to business and investment that we don't, expressing his concerns about the state of Canada’s oil and gas sector at the Economic Club of Canada:

“We all know it, the importance of building the Trans Mountain pipeline and getting it back into private hands cannot be overstated, ideally with the Indigenous communities playing an important role in the ownership structure.”

“If we as a country want to attract international investment, if we want our homegrown energy companies to make the most of their potential, if we want to compete in the world and win, then we must build a modern regulatory framework”

“We are caught up in regulation — instead of delivering results and demonstrating Canada’s environmental and technological leadership.”

Dodig isn’t the first bank CEO to speak out about something that’s so obvious to many Canadians from coast-to-coast, especially in western provinces where natural resources are a major source of prosperity. 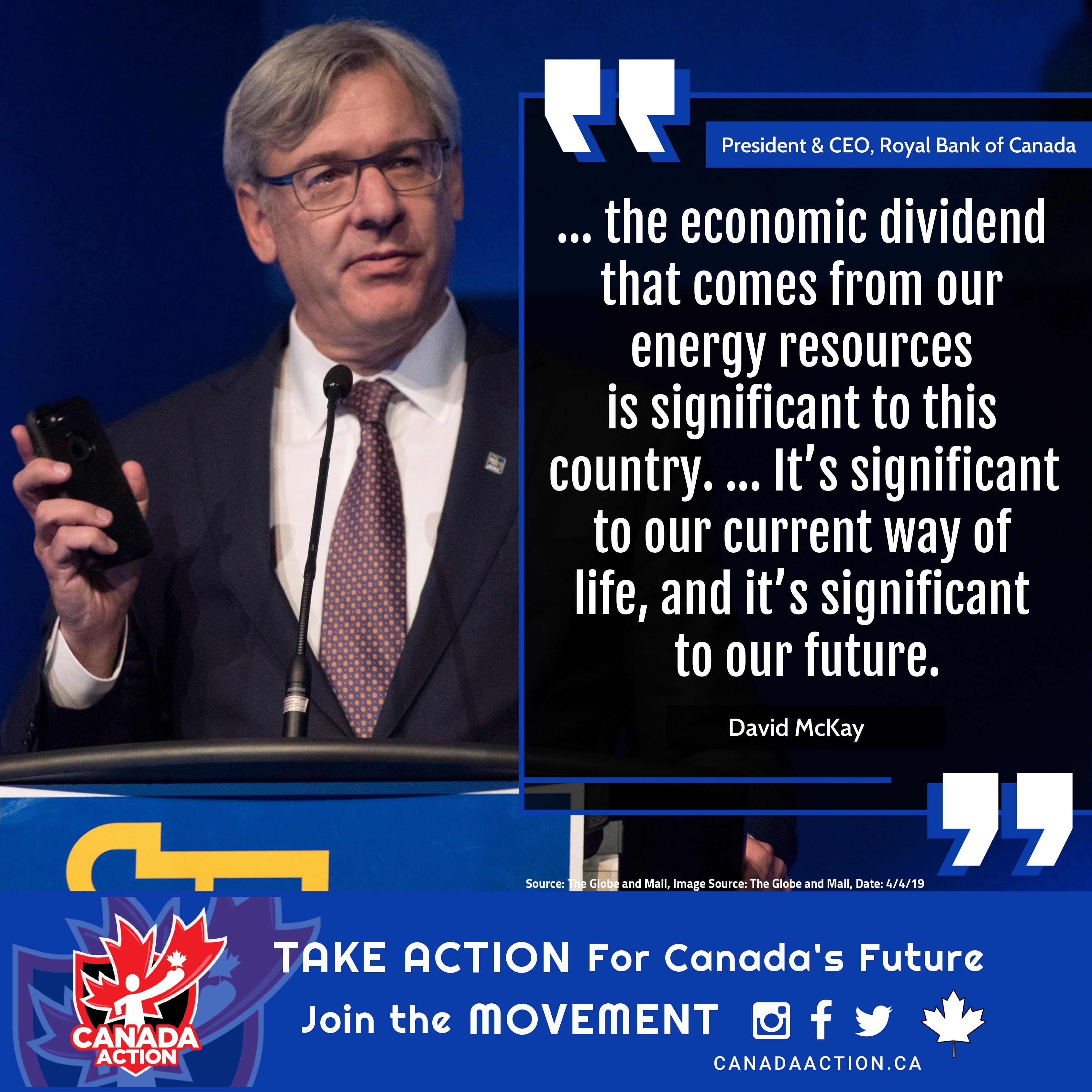 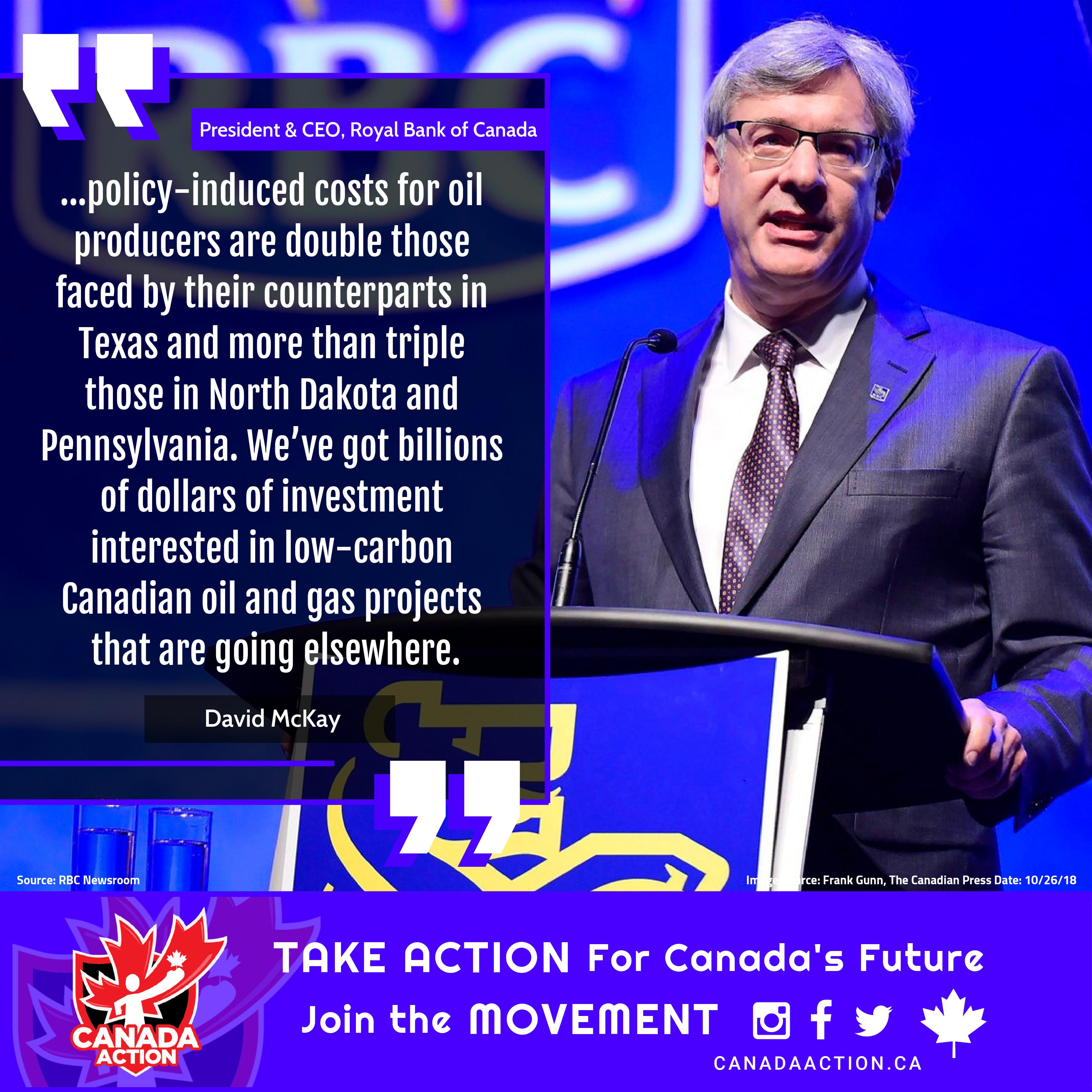 “…policy-induced costs for oil producers are double those faced by their counterparts in Texas and more than triple those in North Dakota and Pennsylvania. We’ve got billions of dollars of investment interested in low-carbon Canadian oil and gas projects that are going elsewhere.” 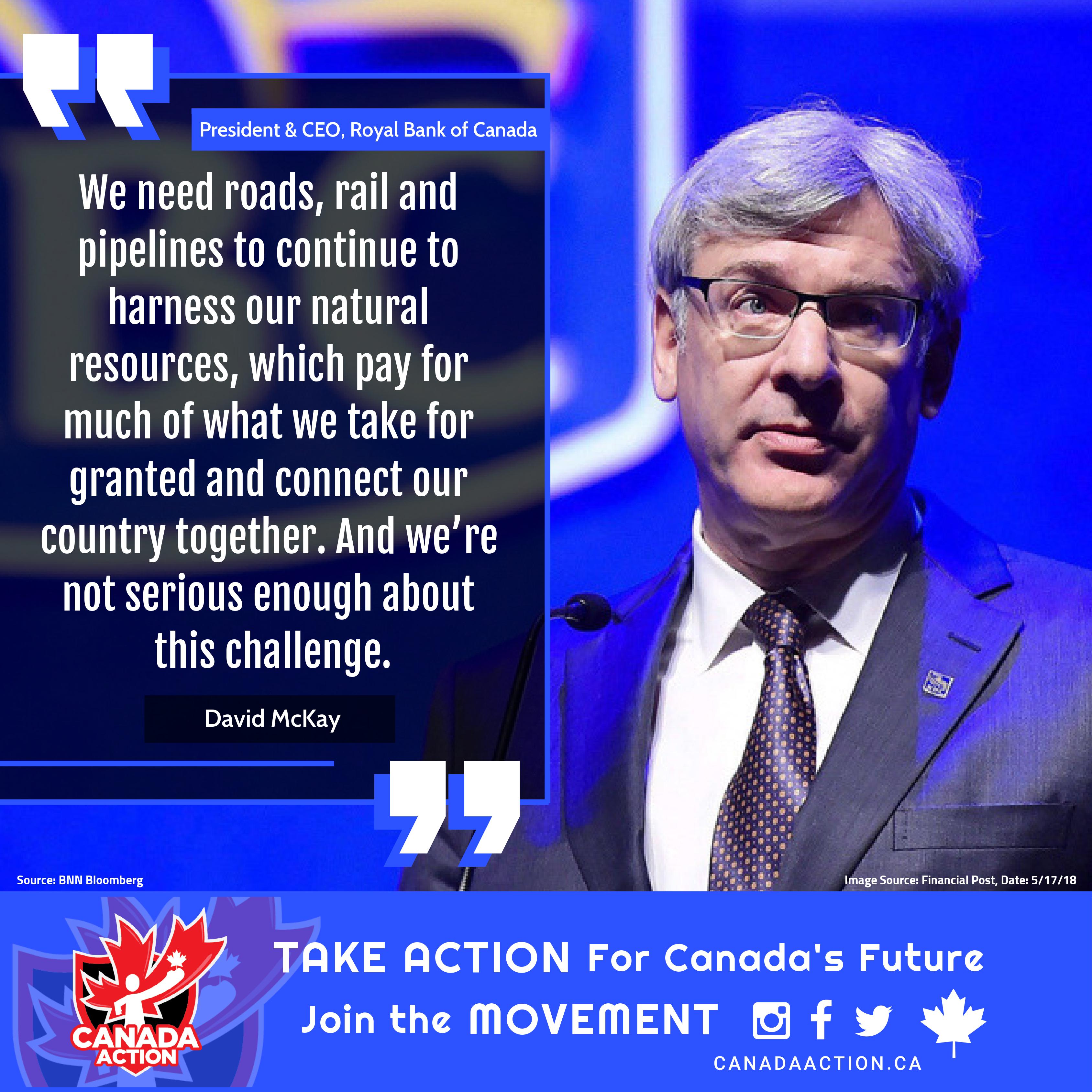 “We need roads, rail and pipelines to continue to harness our natural resources, which pay for much of what we take for granted and connect our country together. And we’re not serious enough about this challenge.”

Dave McKay isn’t the last bank CEO to express his concerns. Another top five Canadian bank is too.

Brian Porter, President & CEO of Scotiabank, also told Canadians about the benefits of Canada’s oil and gas industry from coast-to-coast and warned several months prior about shifting capital and investment to other jurisdictions: 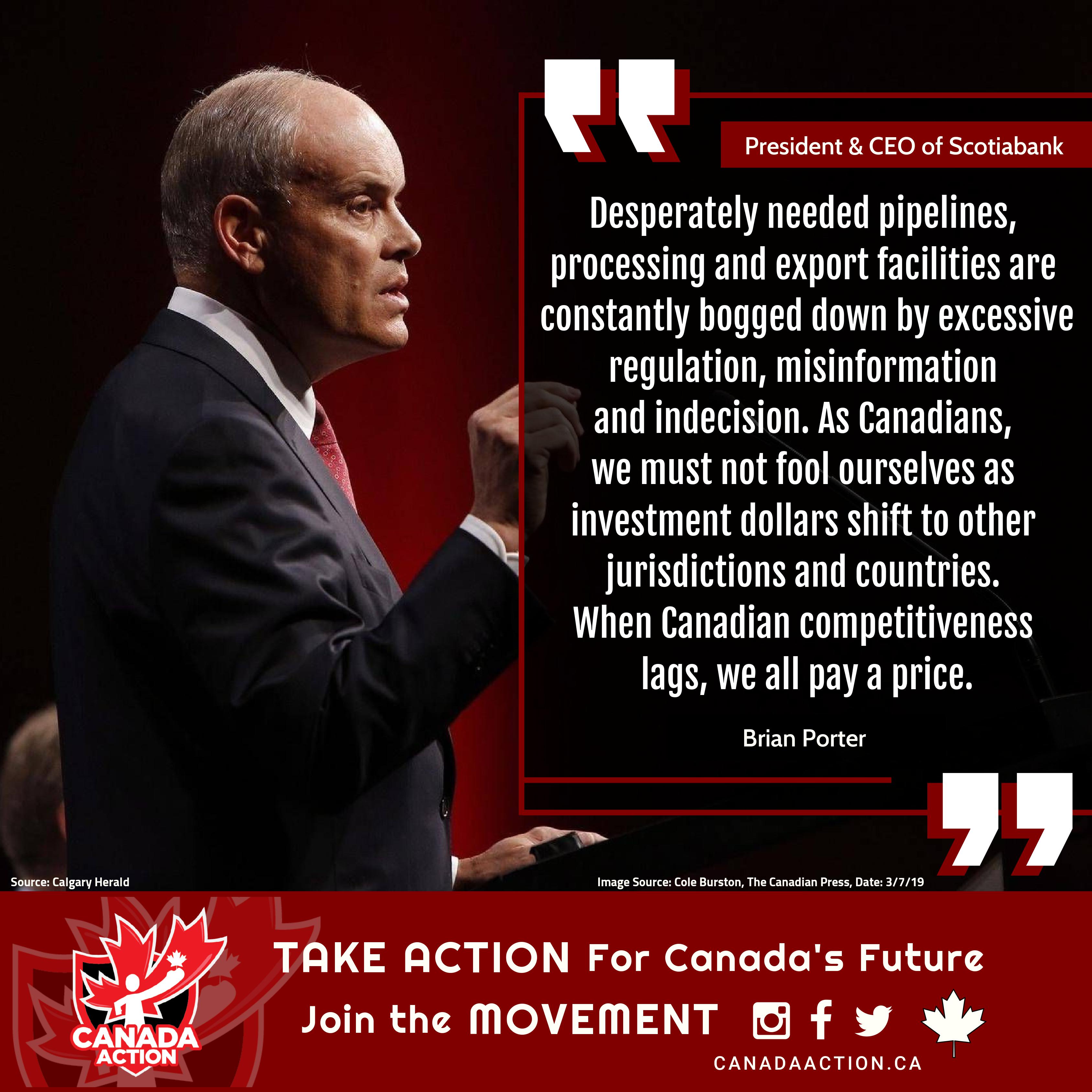 “Desperately needed pipelines, processing and export facilities are constantly bogged down by excessive regulation, misinformation and indecision. As Canadians, we must not fool ourselves as investment dollars shift to other jurisdictions and countries. When Canadian competitiveness lags, we all pay a price.” 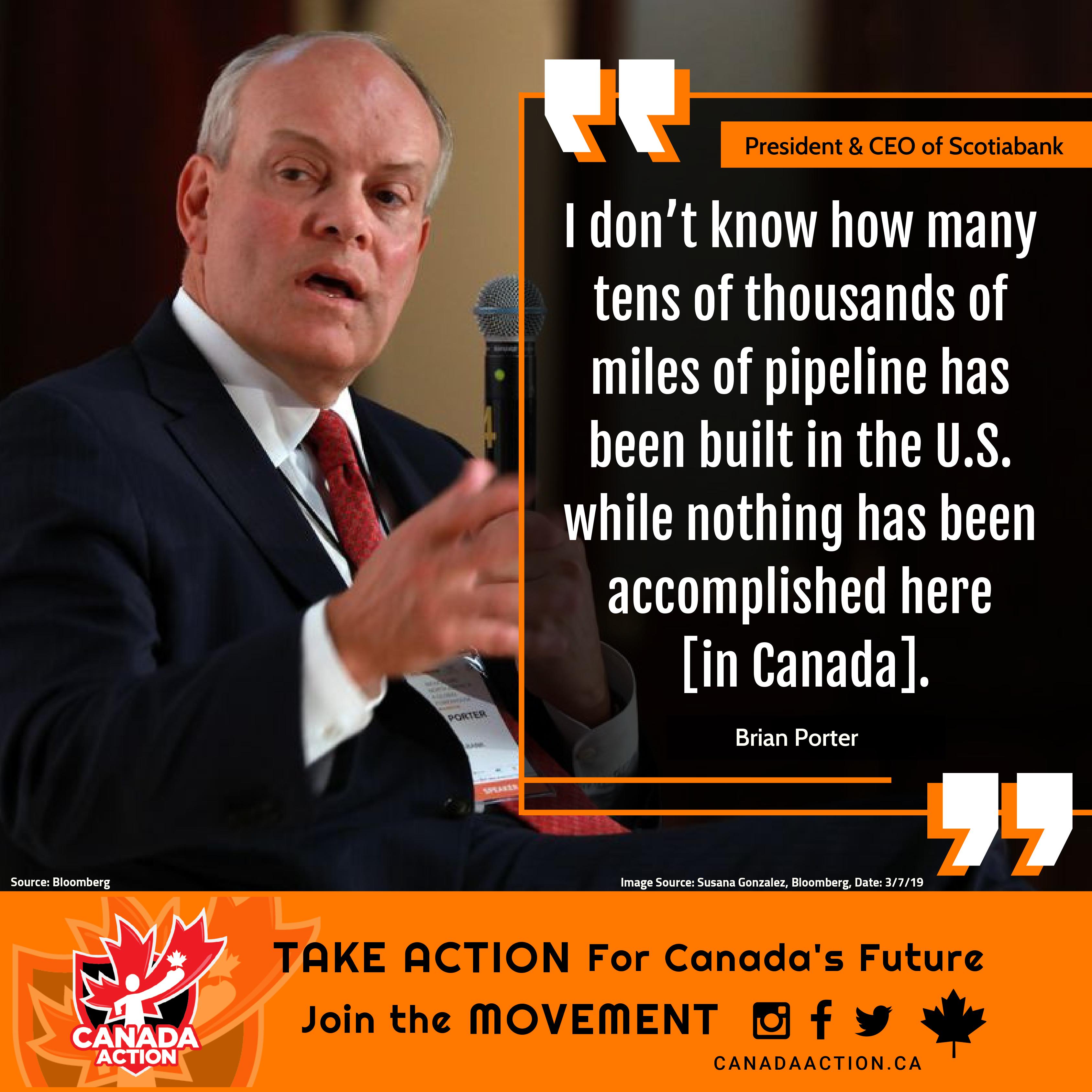 “I don’t know how many tens of thousands of miles of pipeline has been built in the U.S. while nothing has been accomplished here [in Canada].” 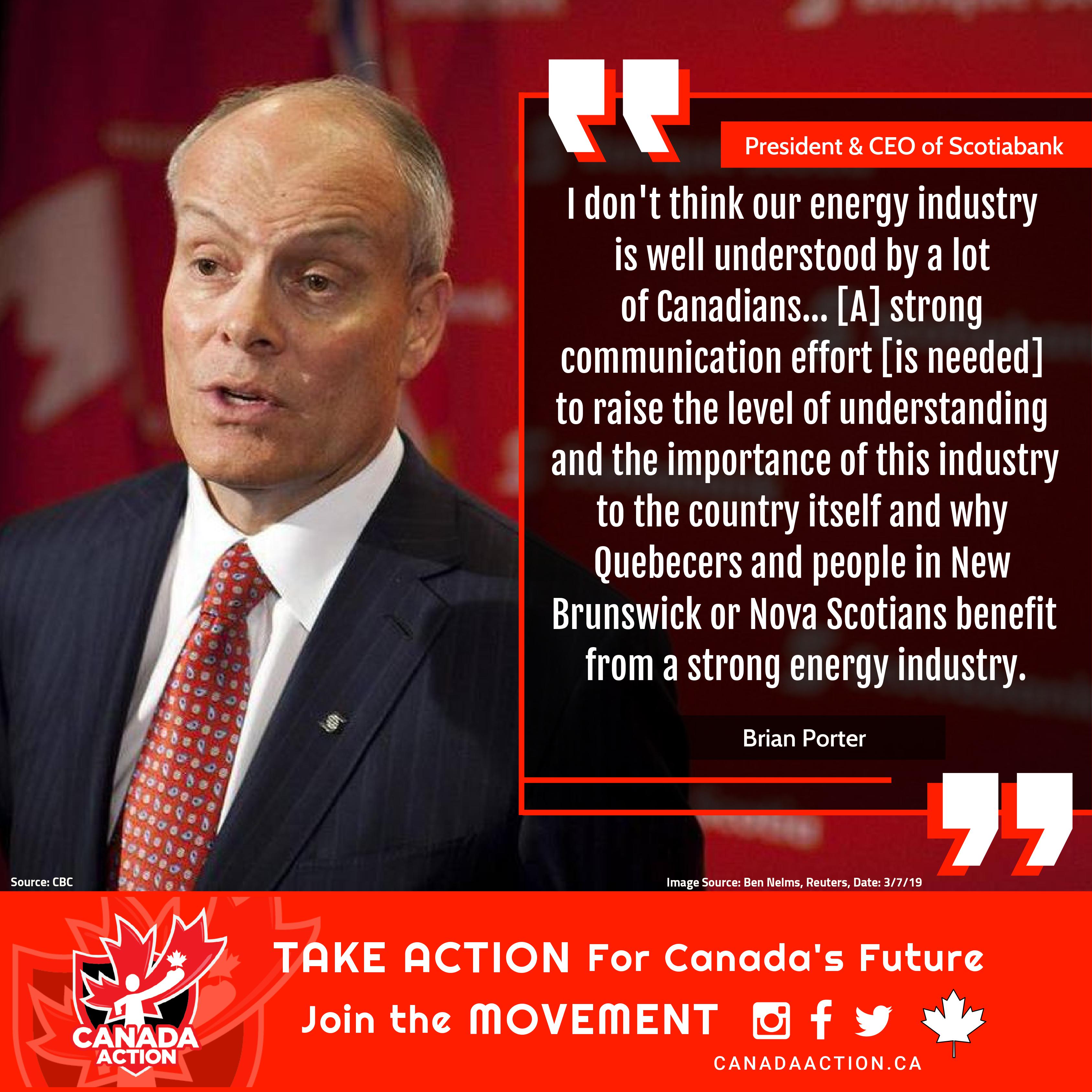 “I don’t think our energy industry is well understood by a lot of Canadian… [A] strong communication effort [is needed] to raise the level of understanding and the importance of this industry to the country itself and why Quebecers and people in New Brunswick of Nova Scotians benefit from a strong energy industry.”

An interview earlier in 2019 with Bharat Masrani, boss of Canada’s second largest bank, also showed the rationality of another one our country’s most prominent CEOs.

He touched on one of Canada Action’s messages - the fact that energy demand is growing, and it should come from somewhere like Canada because of our leadership in environmental, social and governance (ESG) investor standards:

“Would you rather have this energy supplied by companies and entities in North America, where you have strict standards, strict regulation, strict enforcement? Or do you want the world demand to come from places where they may not have a similar kind of protocol?”

Will We Listen to Canada’s Business Leaders?

It’s time we as Canadians started listening to and taking very seriously what some of the most respected business leaders and minds are saying about our energy sector. We are not competitive, and need to seriously reconsider throwing our full support behind the industry. That includes leaders from all political parties and people from all parts of our country.

It’s been said before that the energy sector “pays the rent” in our country, so why aren’t we putting our full support behind one of the world’s most ethical and environmentally responsible energy sectors?

Truth is that the main executives of four of five of Canada’s largest banks are just one category of business leaders across the country expressing concern for our ailing energy sector.

Global demand for oil and gas and other forms of energy is projected to continue to grow for many years to come. As one of the most regulated and environmentally conscious energy producers on the planet, Canada should undoubtedly be the last one “out of the pool,” period.