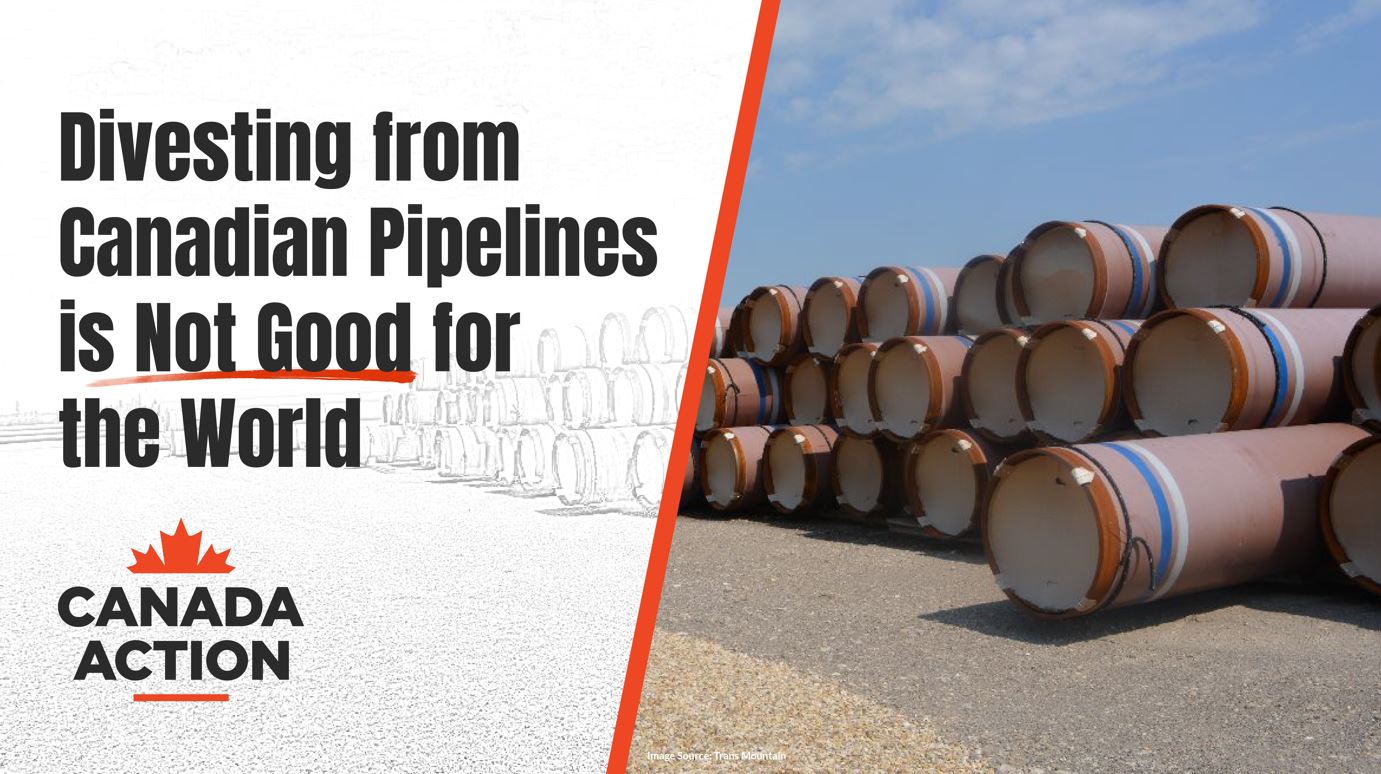 Lloyd's of London syndicate Aspen Insurance announced this past month it would cut ties with the Trans Mountain Pipeline (TMP) when the project's insurance policy expires this summer.

According to pipeline opponents, it is the 17th company to do so – largely a result of activist pressure to stop financing Canadian-made energy projects like the TMP and Coastal GasLink (CGL).

These activists claim that crude oil and natural gas pipelines are a risky investment, saying that the infrastructure will "lock us in" to a long-term future where fossil fuels are still a large part of the energy mix.

Before we go any further, are these "environmentalists" even slightly aware of what's been happening worldwide over the past few years? It seems not.

Ironically, the world is relying on fossil fuels – oil, natural gas, and even coal – for its energy more than ever before, and it will continue to do so with or without Canadian pipelines. Additionally, current global energy shortages and energy security concerns make it extremely counterintuitive to be dropping insurance for pipelines in one of the world's most stable and responsible energy-producing countries.

Canada is a bastion of democratic principles, human rights and environmental protections – three things the world needs more of, not less!

Here are three reasons why insurers need to think twice the next time they're pressured by activists to divest from Canadian energy projects. Also see: 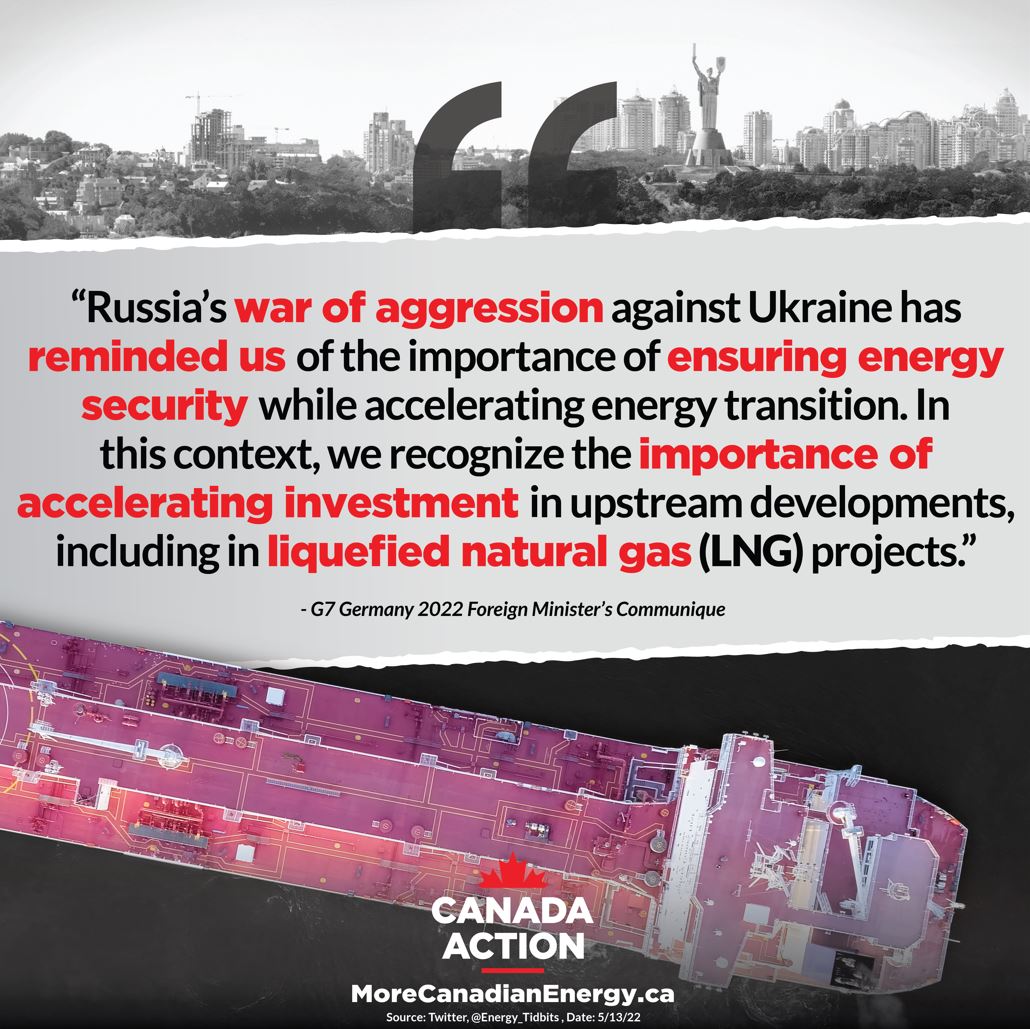 Attempting to shut down responsibly developed Canadian pipelines doesn't keep a single barrel of oil or molecule of natural gas in the ground.

Activists should recognize that global demand for oil and natural gas is projected to continue growing for many years.

Canadian pipelines allow responsibly produced Canadian energy products to be exported to global markets. Without this critical infrastructure, Canada will not be able to obtain more market share and potentially supplant less stable and responsible energy producers often with much weaker protections for human rights and the environment.

It's clear that worldwide demand for all forms of energy – oil, natural gas, coal, wind, solar, hydro, etc. – is growing. So if activists don't want Canadian energy on global markets, the question remains: what producers would they prefer to fill in and supply the world with the energy it needs? 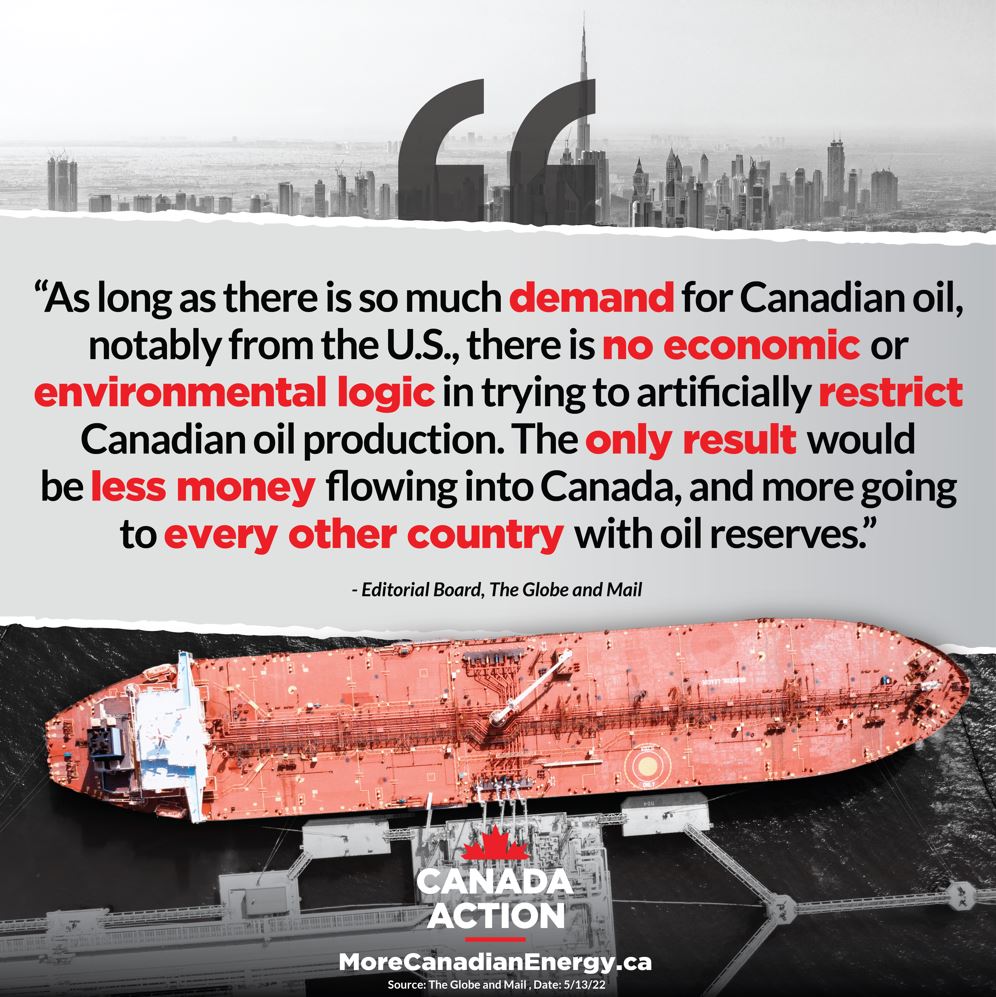 Attempting to stop the development of Canadian pipelines has the potential to cede energy market share to much less stable and responsible producers around the world.

For example, of the world's top ten oil and natural gas producers/exporters, Canada ranks high – if not number one – on several Environmental, Social and Governance (ESG) related indices, including (but not limited to):

Canada is home to one of the most transparent, regulated and environmentally responsible petroleum sectors on the planet. Our industry is a global leader in new innovation, clean technology and emission reductions.

Canada is also a global bastion of democratic principles: legal equality, political freedom and the rule of law. As a result, our government often supports global initiatives that help feed the poor, prevent the spread of disease and promote human rights for all to name a few examples.

And our natural resource sector, especially oil and gas, helps our country fund such initiatives.

For example, Statistics Canada reported last month that exports of oil, natural gas, coal and refined products reached ~$150 billion over the past 12 months – a record high for Canada. As a share of total merchandise export value, the fossil fuel industry represented 27.4 per cent of shipments in March 2022.

Government revenues generated from oil and gas exports could increase alongside expanded pipeline capacity to global markets. In turn, these revenues could help pay for our social programs here at home, but also help promote democratic principles globally if and when need be.

Who would you want your oil and natural gas to come from? Transparent and responsible producers who care about global equality, political freedom and the rule of law, or from other nations who simply don't care as much about the things we do? 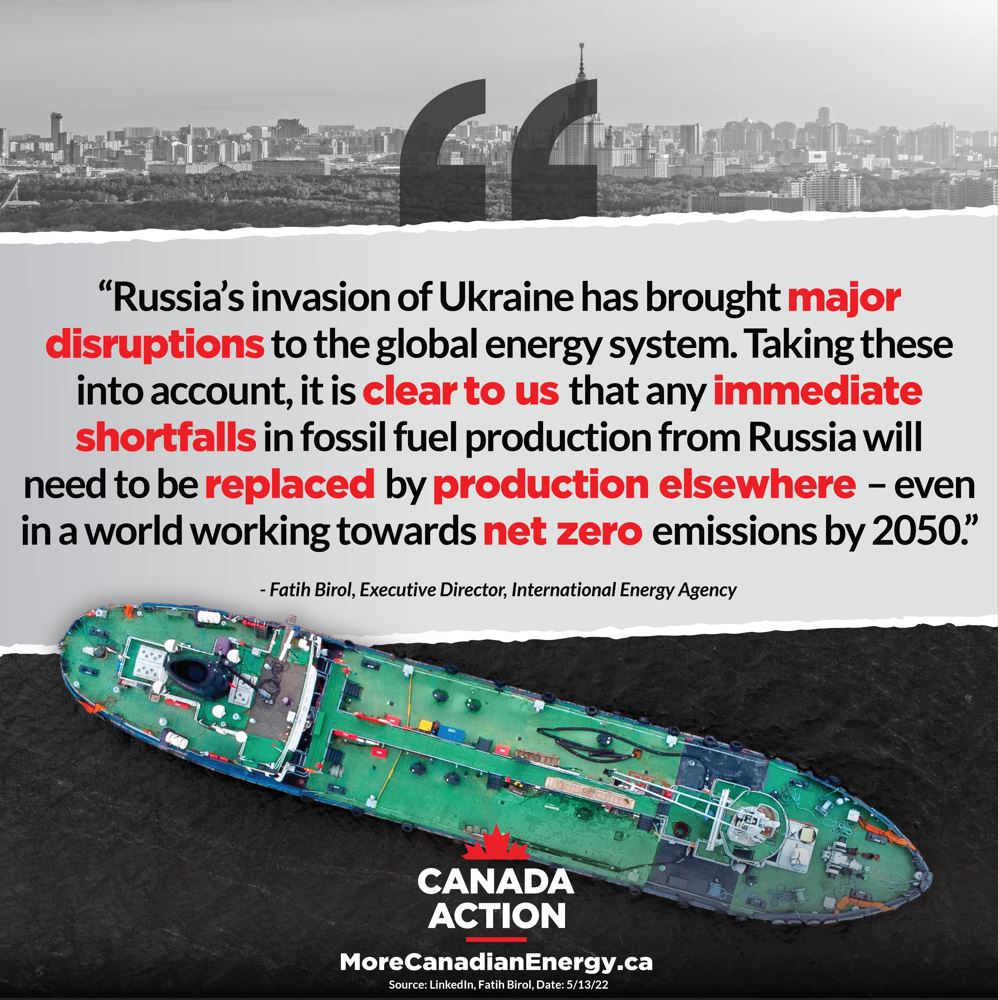 Attempting to stop the development of much-needed Canadian pipelines does absolutely nothing to help solidify energy security in North America or Europe.

As a matter of fact, less Canadian energy on global markets does quite the opposite.

In light of the War in Ukraine, European lawmakers are now desperately searching for alternative oil and natural gas sources as the EU looks to wean itself off Russian energy altogether.

The U.S. is one major LNG exporter stepping up to the plate. Its highly developed LNG infrastructure is allowing our closest ally and trade partner to ramp up production and exports without building new facilities.

America long depended on the world for energy. Today, it has become the world's top producer of both crude oil and natural gas by fast-tracking the development of countless pipelines and export facilities.

Thankfully, the U.S. is helping alleviate some of the EU's energy supply concerns, but it's not enough.

With its vast petroleum reserves, Canada can help provide energy security to our closest allies and trade partners. Pipelines will make that possible.

The world is waking up to the fact it does matter where you get your energy from. So then, why aren't insurance companies such as Argo, Zurich, Munich Re and Aspen?

More Canadian energy on global markets is good for the world. It's best insurers like Aspen reverse course and start supporting Canadian-made energy projects before we find ourselves at the mercy of despotic and autocratic regimes for our energy needs.

From oil to natural gas to renewables to nuclear, global energy demand is growing and supplies are short. Clearly, the world needs more Canadian energy, and pipelines are an integral part of that equation! 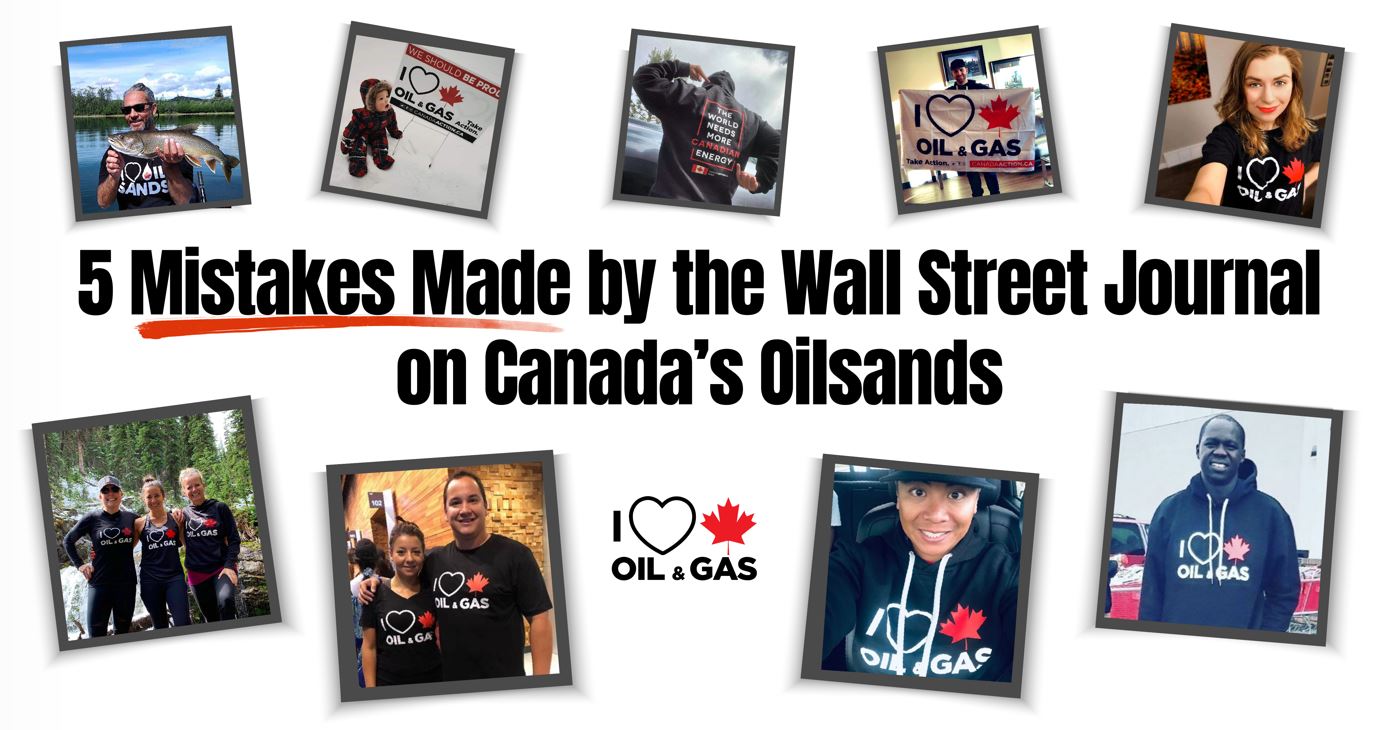