• Canada, with its vast natural resource reserves, is well-positioned to supply nickel, copper, and other essential components used in the production of electric vehicles (EVs)

• Canada's extractive mining sector contributes immensely to our economy; when our natural resources sector is strong, so is Canada 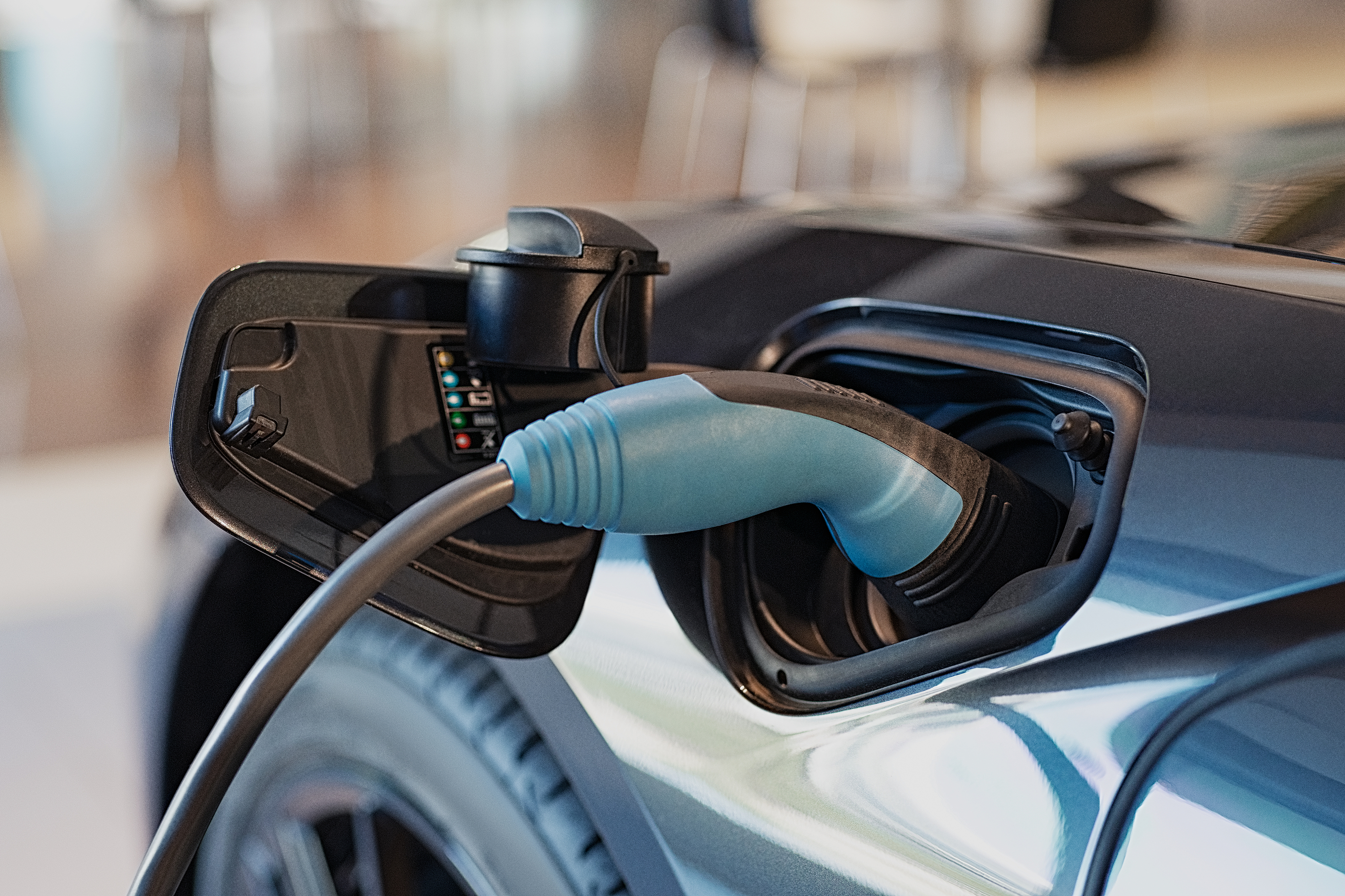 As the world moves towards a lower carbon future, many large automotive companies such as Ford, General Motors, and numerous others are doing their part by announcing plans to produce all-electric fleets of vehicles within the next few decades.

Some Canadians increasingly consider purchasing EVs as gas prices rise and carbon taxes continue to scale up. Data shows that drivers in British Columbia, for example, are turning away from gas guzzlers in response to the province’s carbon tax, believing EVs are cheaper and more eco-friendly.

Electric vehicles - often seen as an important part of the picture in the transition to a lower carbon society - are also expected to account for more passenger car sales in Canada and across the world in the decades to come.

With its vast wealth of natural resources and world-class regulatory regime, Canada is well-positioned to be a global supplier of choice for materials such as nickel, copper, and lithium that are necessary for EV production.

How can Canada benefit from a changing automotive industry? 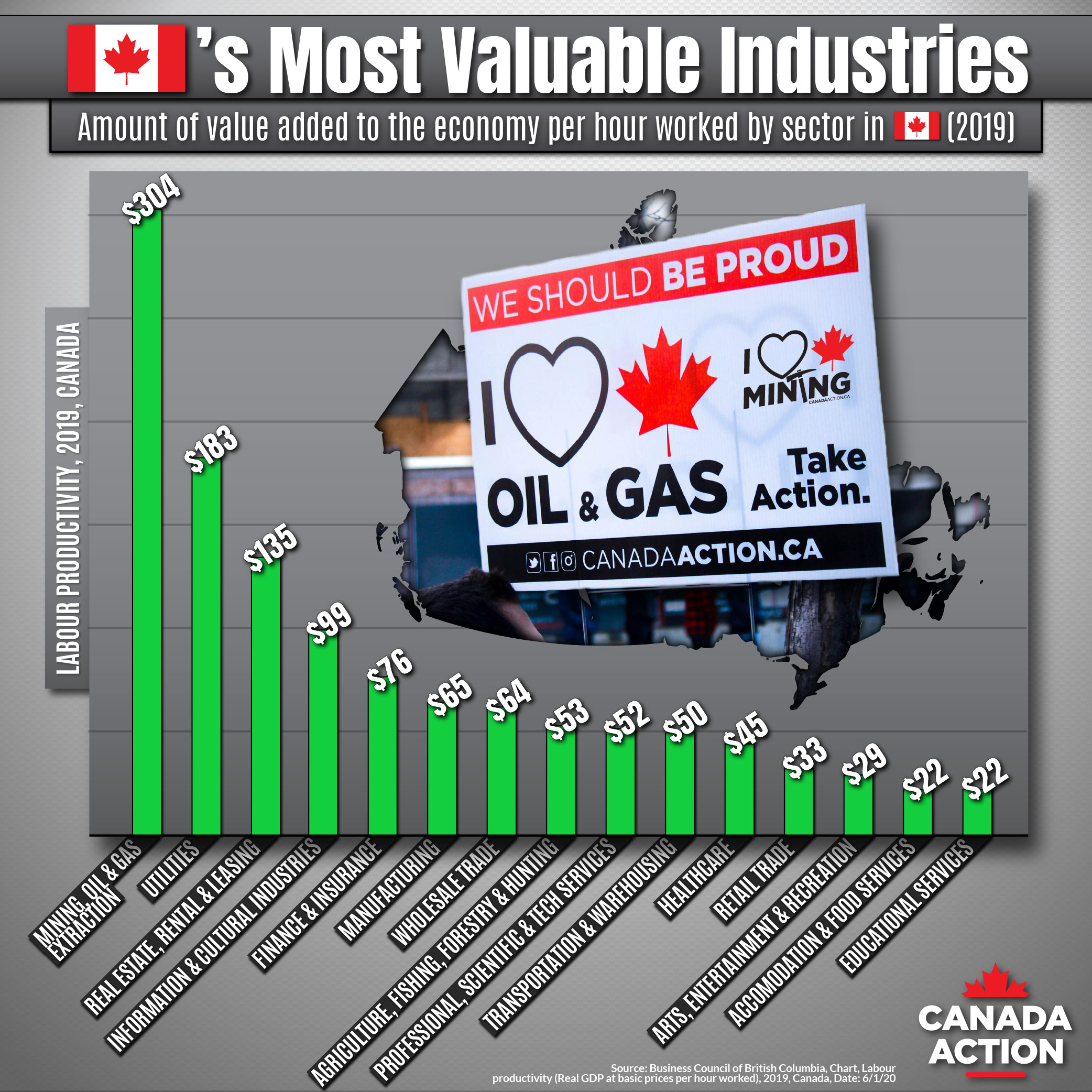 The extractive mining and oil and gas sector remains essential to Canada’s economy, contributing approximately $304 per hour of domestic labour - much higher than all other industries in the country. Overall, the natural resources sector also accounts for 17 per cent of our economy (GDP) and employs more than 1.9 million people from coast-to-coast. In short, when our natural resources sector is strong, so is our economy.

Wiring, batteries, and other EV components are made with massive amounts of copper and nickel, and Canada is a global leader in the production both of these precious resources. It only makes sense that we position ourselves to account for as much market share for these materials as possible not only to reap the economic benefits, but also to ensure these goods are mined using the most environmentally responsible methods.

If these mined materials don’t come from Canada, they will simply be extracted and produced somewhere else like in China, Brazil, or the Phillippines. Canada's Towards Sustainable Mining initiative ensures that we follow some of the most sustainable mining practices in the world. We can't say the same for other nations. 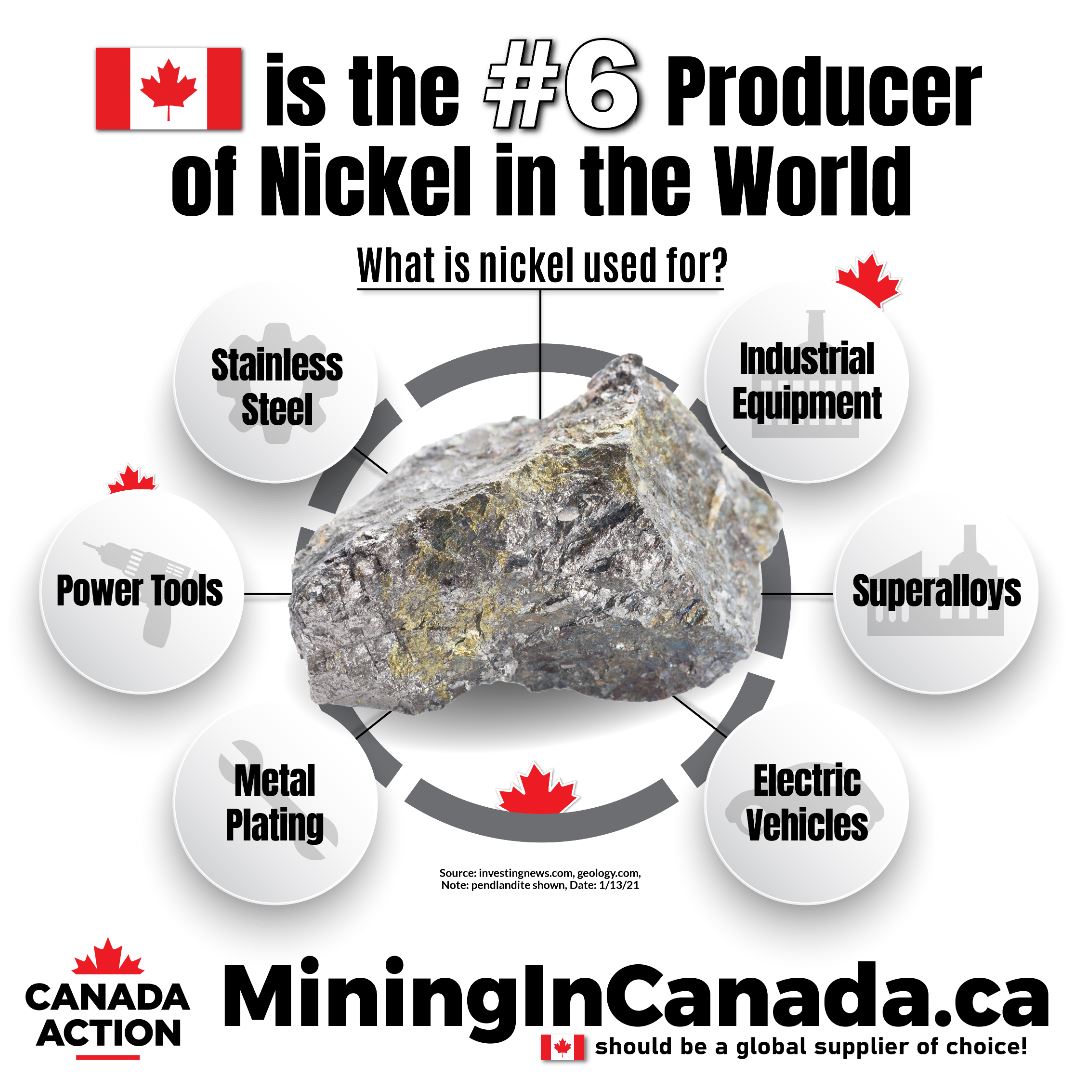 Canada is currently the 6th largest producer of nickel internationally with a yield of around 181,000 tonnes in 2019, and Natural Resources Canada estimates we are home to about 3 per cent of the world’s nickel reserves. Nickel is an essential component of EV batteries; in 2020, over 60 per cent of total global EV battery capacity was built from high-nickel cells.

Canada also ranks 11th internationally in the production of copper. Both Ontario and B.C. mine remarkable amounts of this essential mineral, supporting the economies of numerous rural communities within these provinces. British Columbia typically sends the metal abroad for refinement, while most of the copper mined in Ontario is refined domestically in Flin Flon, Sudbury, and Timmins.

It is estimated that an EV uses four times the amount of copper of a regular car to be produced. Given that many other mineral-rich countries utilize less ethical and responsible mining and production techniques, there’s no question that we should be a go-to source for copper, as well as for other precious minerals and metals used to make EVs.

How will Canada transition to EVs? 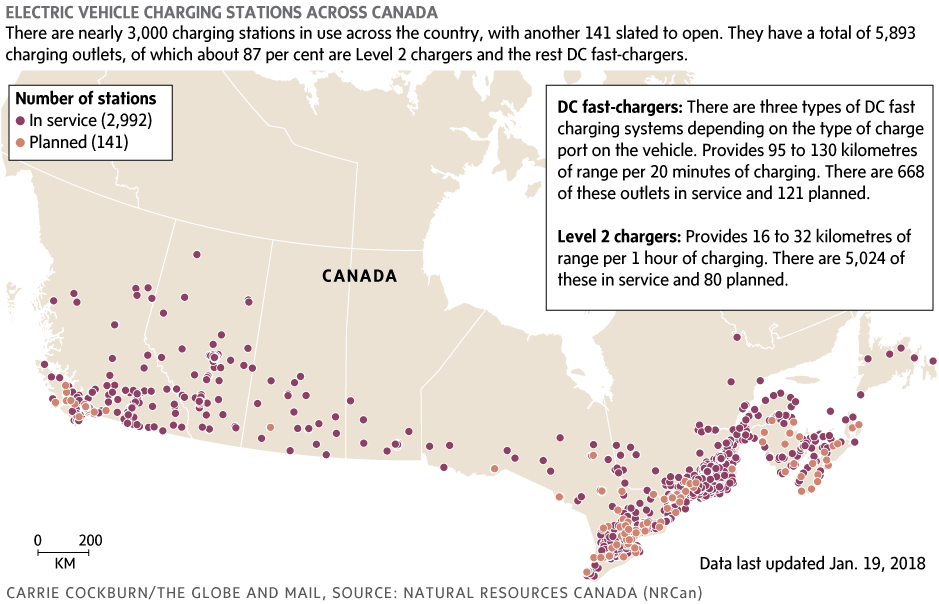 It may not be as easy as we think. Considering the capabilities and cost of the EVs on the market, it’s unlikely that consumers will rush to purchase a new electric vehicle anytime soon. While it’s admirable that Ford, for example, intends to sell EVs only in Europe, Canada’s geography is a little less welcoming for this new mode of transportation given current EV technologies.

One of the major barriers to buying an EV in Canada is the distance these vehicles can travel on a single charge because fast-charging stations are difficult to find in rural areas. There have been national efforts to make owning an EV easier: the Canadian government committed over $300 million to develop a network of electric vehicle charging stations across the country, including in sparsely-populated regions. However, EVs are still not ideal transportation for most Canadian households, especially those with long commutes.

With one of the world’s greenest electricity grids, Canada is ideally suited for the mass adoption of electric vehicles, although internal combustion engines continue to dominate the new vehicle sales landscape. https://t.co/9Mdus2e0hW

Additionally, the price of EVs currently aren’t as consumer-friendly as internal combustion engine vehicles (ICEVs). The Canadian government offers incentives for purchasing an EV, but a $2500 or $5000 incentive still does not make an EV any more of a feasible purchase for many Canadian households.

Tesla’s cheapest model in Canada, the Model 3, boasts a 423km range. However, the car is accompanied with a hefty price tag; buying a Model 3 sets a consumer back $53,000. Canadians could consider a less expensive electric vehicle, like the Volkswagen e-Golf (MSRP $37,890), but the 198-kilometre range makes highway driving significantly more challenging.

There are rebates and incentives for cheaper electric cars, but this varies on model and province. For example, the Hyundai IONIQ has extra incentives available for B.C or Quebec-based consumers, but other Canadians are left paying full price for their new EV. 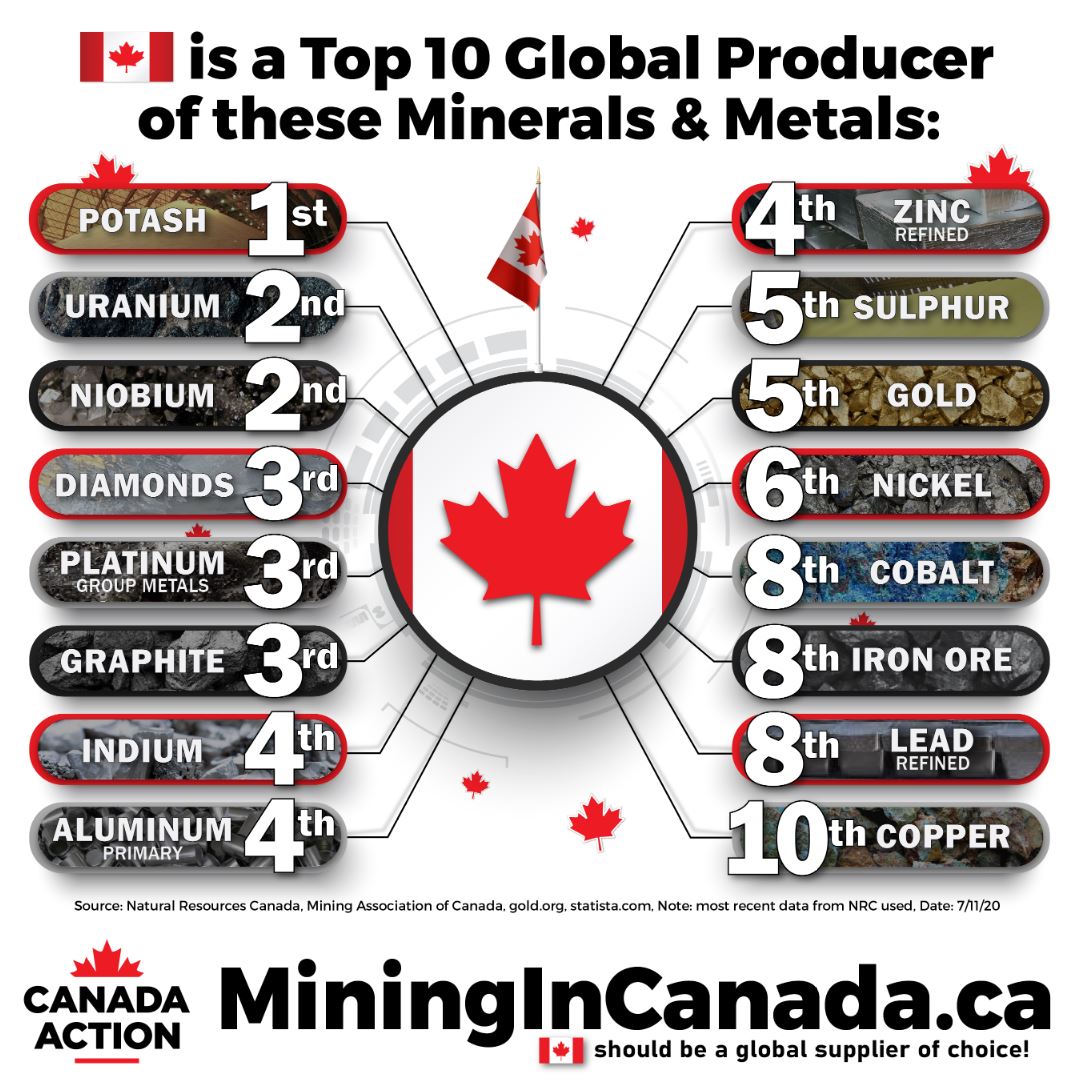 Long story short: it seems so. A 2017 report by the 2 Degrees Society, based in Sechelt, B.C., found that because of Canada’s massive hydropower grid, we are home to 7 of the top 10 locations in North America for the introduction of EVs.

The report concludes that even in provinces where fossil-fuel electricity generation still dominates, such as Alberta and Saskatchewan, that the shift to EVs will lead to a drop in greenhouse gas (GHG) emissions because centralized, efficient power plants will replace “miniature, inefficient, fossil-fuel power plants (internal combustion engines) that emit climate pollution.”

While this seems to make sense, 2 Degrees also acknowledges that EVs aren’t as “green” as they seem. EVs require massive amounts of mined materials to produce, which generates GHG emissions.

The question remains: would you prefer that these minerals and metals come from environmentally responsible producers such as Canada, or from other nations who likely don't practice the same sustainable methods of extraction? 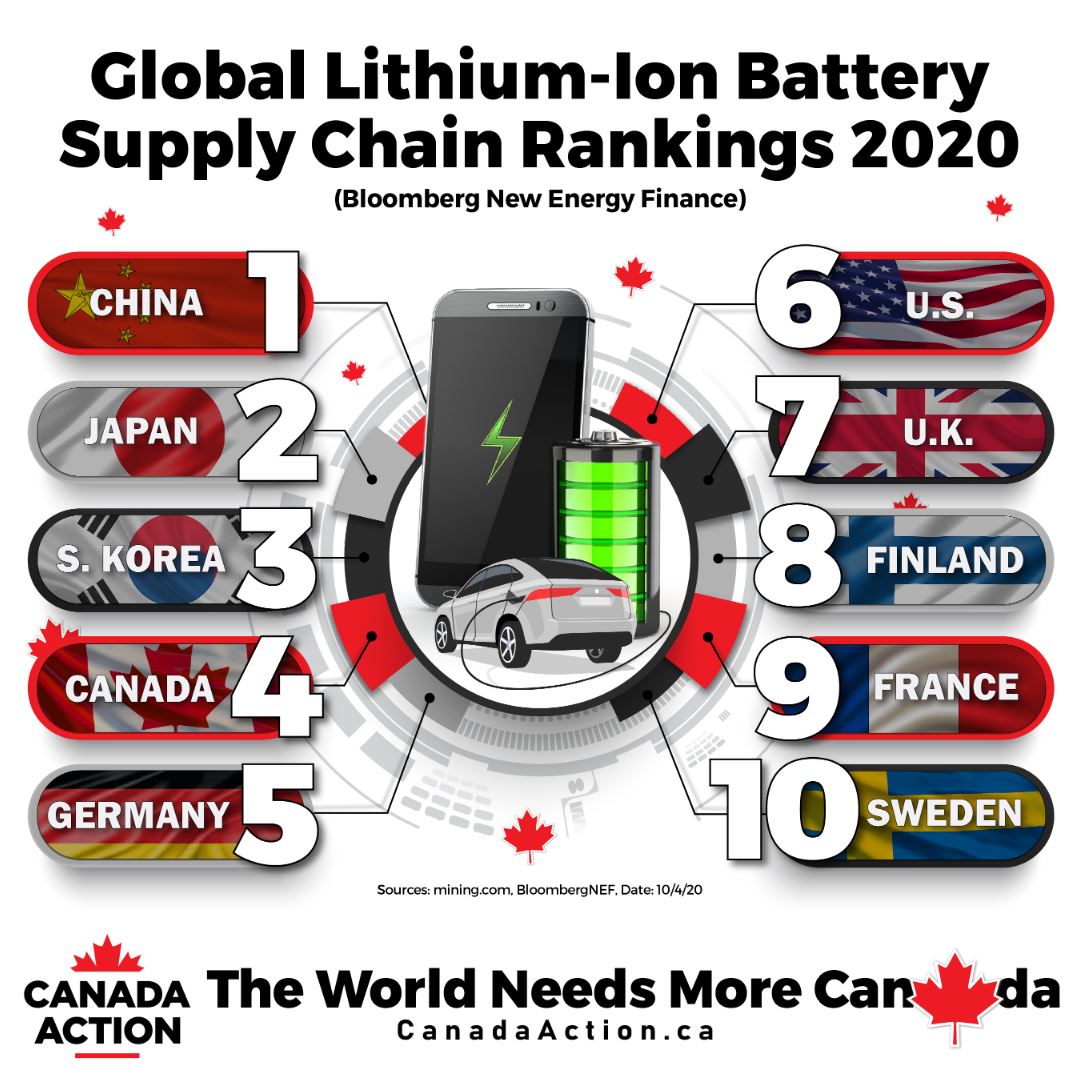 Lithium is another main component used in the production of EVs, and Canada is sitting on an untapped wealth of this resource. According to NRC, Canada is home to about 4 per cent of the world’s known lithium reserves and this number will increase as exploration continues.

Alberta’s lithium-laced oil sands are also said to be a great opportunity for Canada to position itself as a global supplier of choice for lithium.

“On any given day, oil sands producers in Alberta are probably producing more lithium feedstock at a very basic level than all of the lithium companies put together times ten,” said Jared Lazerson, Chief Executive Officer of MGX Minerals.

MGX is just one company looking to produce lithium from oil sands wastewater using new and innovative methods. According to MGX, this method is also a much more environmentally friendly way of producing lithium when compared to traditional mining techniques.

With Canadian ingenuity and innovation, we can - and should - position ourselves as a global supplier of choice for lithium to be used in the production of EVs.

As one of the most transparent, regulated, and environmentally responsible global producers of natural resources, it only makes sense that we support our mining industry in the extraction and production of elements such as nickel, copper and lithium. What’s good for the Canadian mining industry and the economy is also good for the global environment!

Join us on Twitter, Instagram and Facebook to learn more about our world-class natural resource industries and how they contribute to our communities. We hope to see you there! 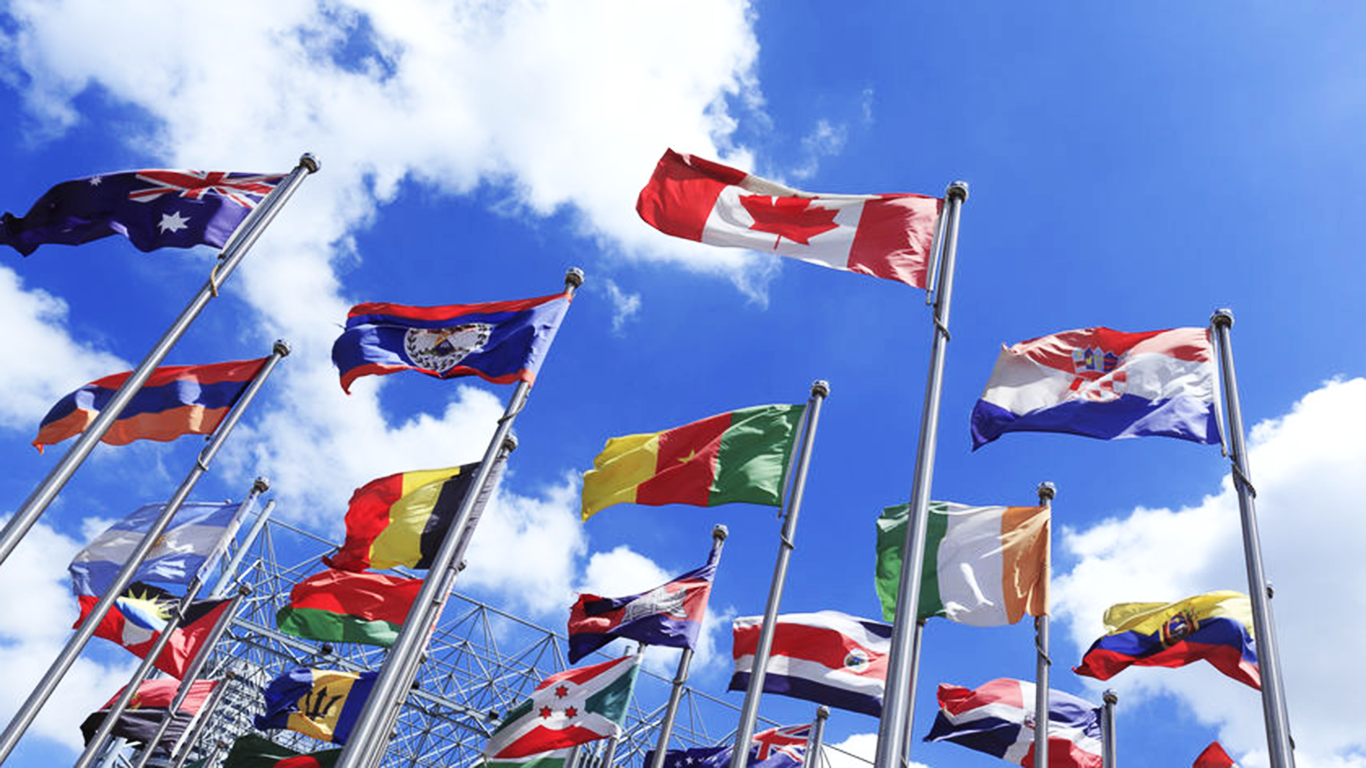 Key Points • Canada's ranking on the Climate Change Performance Index (CCPI) 2021 does not reflect its true performance on taking climate action • For 3 out of 4 categories, the methodology used to rank nations on the CCPI 2021 isn't very understandable or intuitive • Canada i... 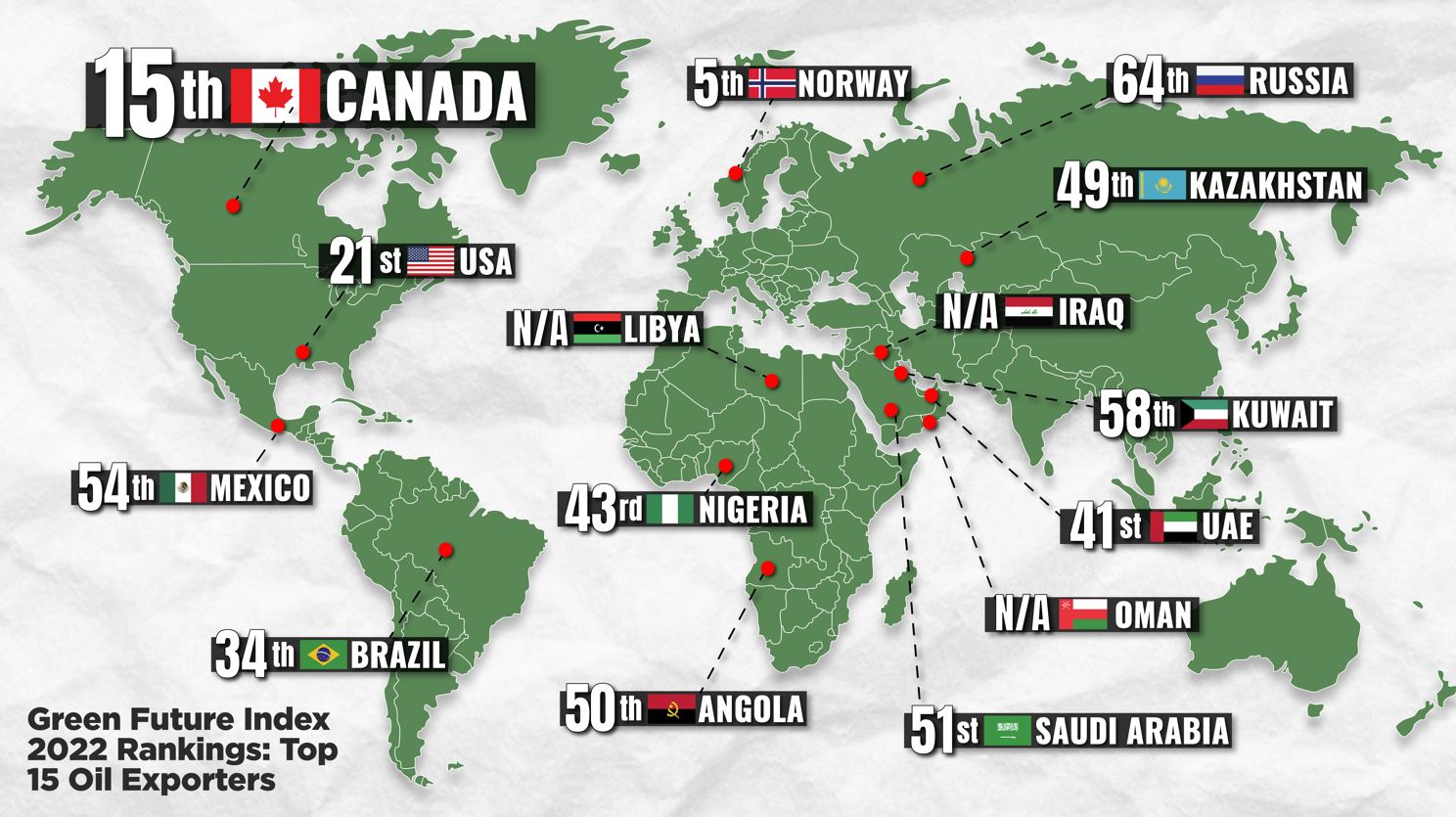 Key Points • Canada ranked 15th on the Green Future Index 2022 globally, the 2nd highest out of the world's top 15 oil exporters and 5th amongst the G20 economies. • Canada's exceptional performance on the index is supported by the revenues from Canada's natural resources sect...